A Green New Deal: Reimagining the US Economy 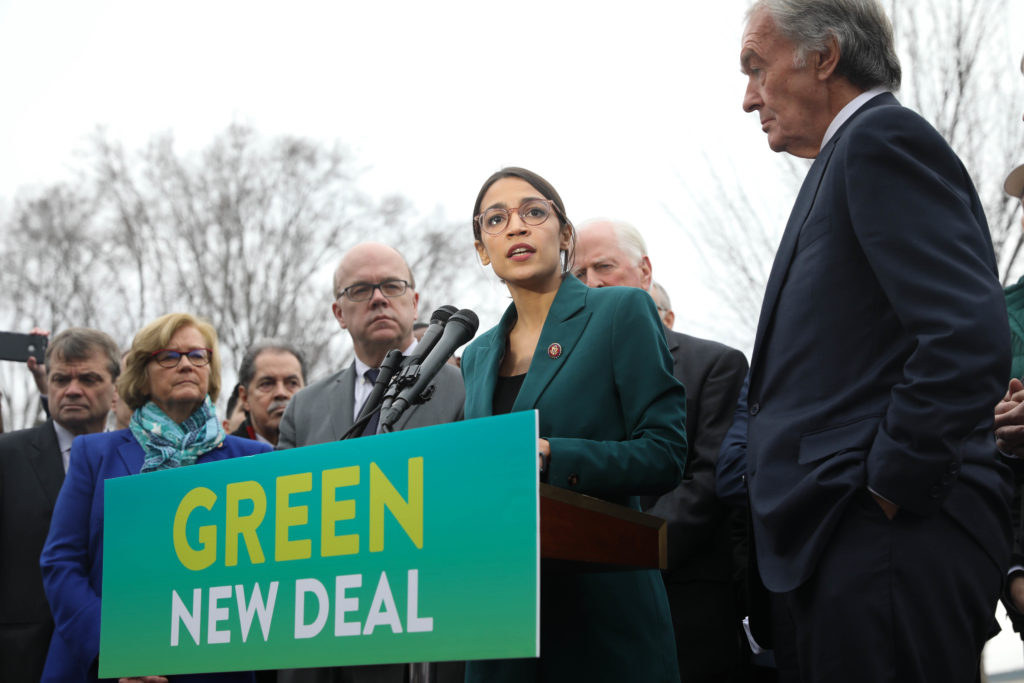 Why do we need the Green New Deal?

In an age of rising inequality and perilous climate forthcomings, advocates for vigorous Keynesian-style state interventions are garnering support in the United States. Their inspiration is, of course, President Franklin D. Roosevelt, promulgator of a Green New Deal economics, a series of public works programmes and reforms aimed at lifting Americans out of the miseries of the Great Depression.

The New Deal fundamentally changed the federal government’s relationship to US citizens, establishing itself as responsible for their welfare.

Likewise, promoters of a Green New Deal call for a state-led response to the challenges posed by climate change and see investments in renewable energy and green-tech as an effective means to lift Americans out of poverty.

The ambitious programme, which is yet to be articulated, would address both climate change and economic inequality with sweeping legislation to achieve “100% of national power generation from renewable sources” within the next 10 years.

The congresswoman is spearheading the Sunrise movement to cajole members of Congress into forming a Green New Deal Select Committee and draw up a blueprint for action.

What is the Green New Deal?

Thomas Friedman, the New York Times commentator coined the term in an oft-quoted 2007 column which called for an end to fossil fuel subsidies, a tax on carbon dioxide emissions and for the creation of lasting incentives for solar and wind energy.

Then-presidential candidate Barack Obama appropriated the call and swept to power on the pledge to create “5 million green jobs” and incorporating in policy many aspects of the current Green New Deal reform programme. Democrats eventually passed a landmark cap-and-trade bill – the “American Clean Energy and Security Act” in 2009 – with a promise to generate US $150 billion in clean energy investments and create 1.7 million jobs.

But electoral tilts in favour of the Republican party dashed hopes for any prolongement of such policies in the World’s leading economic powerhouse (and polluter), sanctioning an abrupt pause to any talk of large-scale domestic green initiatives. Poignantly, it prompted astonishing reversals like the repeal of the Obama-era Clean Air Act.

Perhaps emboldened by the institutional backtracking on climate pledges, proponents of the Green New Deal enjoyed a resurgence in recent months. They are adamant to see their plan come to fruition. The Sunrise Movement hashed out the proposal for the creation of the Select Committee already in November 2018.

The movement calls for a fully decarbonised economy, investments of trillions of dollars, a wealth tax to cover the costs for a “just transition” to a new economic paradigm. “The Green New Deal we are proposing will be similar in scale to the mobilisation efforts seen in World War II or the Marshall Plan,” Ocasio-Cortez said.

“We must again invest in the development, manufacturing, deployment, and distribution of energy but this time, green energy.”

Despite the grassroot enthusiasm, any jolt of optimism should be measured against the current backdrop of political retrenchment, a resurgence of the coal industry and a White House leadership hostile to state intervention and apathetic to environmental issues, placing a heavy ceiling to any hopes of implementing concrete proposals in the short term.

Cognisant of the mammoth legislative task ahead, GND advocates are trying to fill the strategy void left unaddressed by the Democratic Party, the largest political organisation in America that cares about climate change but which has yet to agree on a way to tackle it policy-wise.

“The Green New Deal is a great framing and I’m glad it’s catching on, but this whole thing needs to be at least as comprehensive as the New Deal,” said Ashik Siddique, who serves on the Democratic Socialists of America’s climate working group. “We are talking about the need to transform the physical infrastructure of every sector of the economy.”

Rhiana Gunn-Wright, an advocate with New Consensus, a groups associated with the Sunrise movement, is one of the drivers of the policy renewal. She plans to convene other experts and activists for this ambitious undertaking – namely, figuring out how to transform the world’s largest economy into a carbon-neutral power.

“This requires an incredible amount of policy knowledge, more than one group, definitely more than one person can bring to bear,” she says, “so the hope is that it can be a foundation for supporting research.”

Gunn-Wright continuously brings back the question to how ordinary citizens would be affected by the programme.

“My team thinks about the end user” she says. “How does the average person get help putting solar panels on their roof or find a suitable job under the GND?”

Other efforts to fill in the policy gap are outlined in report by Greg Carlock at Data For Progress, an upstart think tank. It details options for each of the programme’s large-scale goals, from investments in public transit to eco-building standards and sustainable agricultural practices.

“Climate change is an emergent property of a bad economic system,” Carlock says, referring to neoliberal market-based solutionism. Ultimately, the GND aims to transform what its proponents view as an outdated economic system.

The grassroots dialectic, occasionally tinged of American exceptionalism, may succeed in garnering momentum and political oompf within state and federal legislatures, but faces an uphill battle with public opinion: outside of Washington’s gleaming corridors, few people have ever heard about the Green New Deal.

A recent survey from Yale Program on Climate Change Communications found that the principles underpinning GND command a majority and bipartisan support. But their research also shows that 82% of Americans have never heard of it.

Linking the initiative with large scale job-creation could unlock broad electoral support. Evan Weber, co-founder of Sunrise, believes that to succeed they must: “connect [the GND] inextricably to the economic pain that so many Americans still feel, and show people that there’s a way to build a better economy and improve their lives through action on climate change.”

FDR was able to channel discontent into productive endeavours of public utility. Pundits and environmentalists everywhere are waiting to see if the experiment can be repeated. In a green coating.