After Near Deadlock, 190 Nations Agree to Climate ‘Rulebook’ 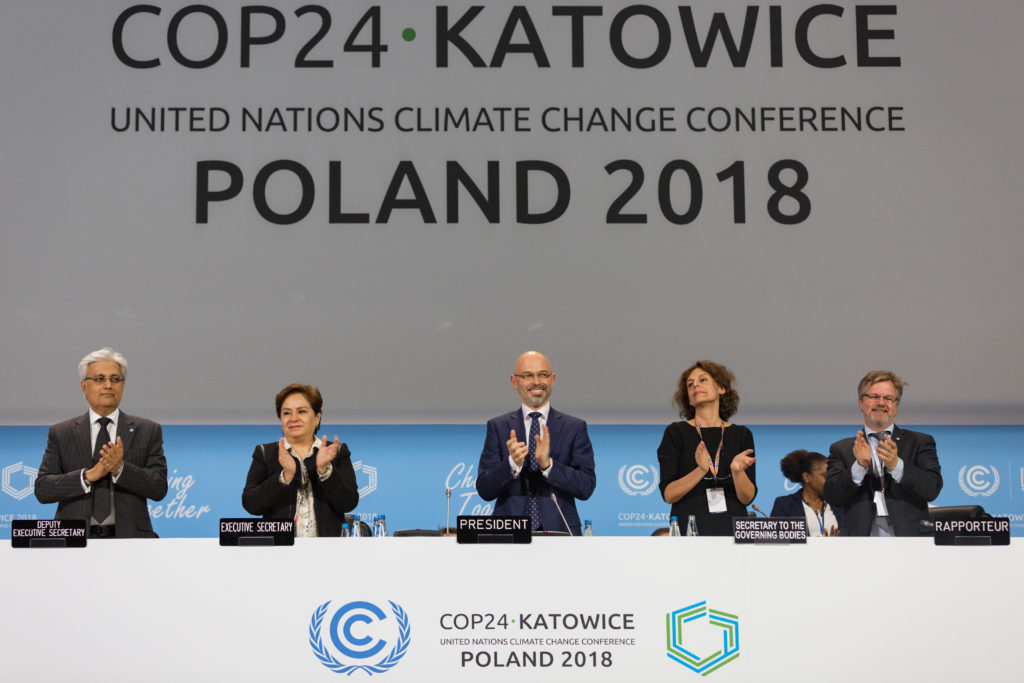 190 countries, including China and US, the largest carbon emitters, have adopted a 133-page climate rulebook that reinvigorates the 2015 Paris climate agreement by setting out how countries will report their emissions and efforts to reduce them.

What is the climate rulebook?

To keep nations in check, the climate ‘rulebook’ contains a compliance mechanism, which means that countries that don’t submit their reports on time will face an enquiry. For developing countries, the new regulations are “flexible”, so they can sign up for the rules at a later date.

It was the outcome of two weeks of negotiations at COP24, the UN climate change conference that brought over 20 000 participants – from politicians to scientists and business representatives – to the industrial city of Katowice, Poland in December 2018.

What’s missing from the climate ‘rulebook’?

Countries failed to agree on Article 6 – Market Mechanisms – excluding an important element of the rulebook to address international cooperation on carbon markets.

The contentious point that nearly derailed the climate negotiations was on basic accounting rules to prevent “double counting” of emissions reductions.

Brazil refused to budge, insisting that it be allowed to double-count carbon credits by applying them towards its own Nationally Determined Contributions (NDC) while selling them to another country that wishes to apply them toward that country’s NDC.

This is the equivalent of paying your bills, but not deducting the amounts from your bank balance. Brazil has amassed large piles of carbon credits under the 1991 Kyoto treaty rules.

“Such a loophole would undermine the integrity of the mechanism and could potentially threaten the objectives of the Paris Agreement”, said Nathaniel Keohane, Senior VP at the New York-based Environmental Defense Fund (EDI).

Economists believe that a functioning carbon trading system is an effective way to drive down emissions and raise large revenues for measures to curb global warming. Nations can nearly double their ambition through the use of well-designed carbon markets, relative to the current targets, according to EDF analysis.

“This is the potential value of Article 6, and why it deserves such serious attention. It is also why the business community is so intently focused on its success, because it can lower cost and enable transformation”, said International Emissions Trading Association (IETA) CEO Dick Forrister.

Unable to reach agreement, negotiators delayed a decision on Article 6 until next year. But they made surprisingly rapid progress on other areas.

All nations agreed to a common transparency framework that ensures robust accounting and biannual reporting requirements for carbon emissions.

The US negotiated for strong transparency rules that put all countries under the same rules, in spite of refusing to “welcome” the IPCC report at the outset of the conference.

“Overall, the United States’ role here has been somewhat schizophrenic, pushing coal and dissing science on the one hand, but also working hard in the room for strong transparency rules,” said Elliot Diringer of the Washington-based Center for Climate and Energy Solutions.

Ensuring China and the US face similar regulations has long been a key of American policy.

Developed countries are now obliged to report every two years on what climate finance they have provided to developing countries, and will biennially report estimates of future financing to be contributed. Other countries are encouraged to follow suit.

But dramatic efforts are needed to “ramp up climate finance”, says Han Chen, Manager of Energy Policy at the Natural Resources Defense Council.

She says countries need to intensify financing through the Green Climate Fund and other channels and shift resources from high-carbon to low-carbon projects across the economy.

“We’re running out of time, and need to align all financial investments with the Paris Agreement by getting out the dirtiest, worst-polluting projects. There’s no time to waste.”

As the talks trailed on to late Saturday, the rulebook was hailed as “positive for the world” by Michal Kurtyka, the Polish official who chaired the summit. But many environmental campaigners believe that more ambitious targets should have been set.

“The majority of the rulebook for the Paris agreement has been created, which is something to be thankful for,” said Mohamed Adow, a climate policy expert at Christian Aid.

“But the fact countries had to be dragged kicking and screaming to the finish line shows that some nations have not woken up” to the alarming consequences of global warming as outlined in a report by the UN Panel on Climate Change (IPCC).

Jennifer Morgan, Executive Director of Greenpeace International, believes that COP24 was a missed opportunity for radical action. “A year of climate disasters and dire warning from the world’s top scientists should have led to so much more,” she said.

“Recognising the urgency of raised ambition and adopting a set of rules for climate action is not nearly enough when whole nations face extinction.”