Climate Finance Surges to US$463 Billion, Gains Momentum in Asia 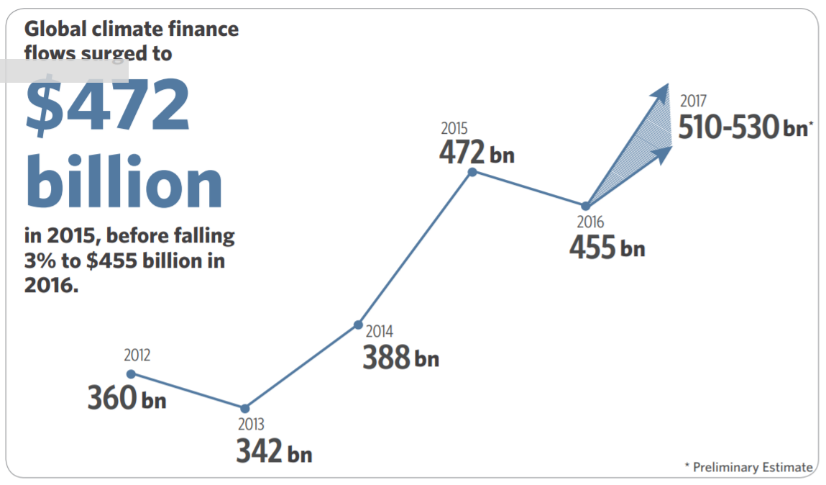 What is climate finance?

More money than ever is being invested in climate finance, from renewable energy generation to sustainable transport, low-carbon technologies and climate-smart agriculture.

Global climate finance flows amounted to a massive US$463 billion on average for 2015/2016 and the numbers are expected to continue to rise to US $510-530 billion.

Two decades ago, climate finance was managed by a small number of large funds associated with the United Nations Framework Convention on Climate Change, including the Green Climate Fund (GCF) – the largest dedicated climate fund valued at US$16.3 billion. The funds now account for only 0.004% of global climate finance.

There has been an explosion of public, private, bilateral and multilateral sources that offer countries new opportunities to address their climate and development needs.

To keep global warming in check, a global investment of US$1.5 to $3.8 trillion a year in clean energy infrastructure is needed to transition the world to a low carbon, climate resilient future, according to the Intergovernmental Panel on Climate Change.

How to mobilise additional climate financing?

Only 6% of global climate finance is in the adaptation sector, including disaster risk reduction, coastal protection, resource management and infrastructure.

In Asia, a continent particularly vulnerable to climate change, adaptation investments are critical and there is a need for green and climate-resilient infrastructure.

Investments in green roofs mitigate the urban heat island effect – when an metropolitan area is significantly warmer than rural areas due to human activity.

Living shorelines, buffers, dunes and marsh restorations, which can be built with climate finance, help to reduce the impact of storm surges.

The Asian Development Bank (ADB) estimates that the gap for climate-resilient infrastructure is US$3.6 trillion for developing countries in Asia.

“The question is who is going to make the investments that are needed,” says Dr Ma Jun, president and chair of the Hong Kong Green Finance Association (HKGFA).

He argues that governments “can’t finance these requirements. [China] issued a document saying that only 10% of green investments can be provided by the government, 90% of the green investment has to come from the private sector which essentially tells us why we need to green the financial system.”

Aligning the financial sector with sustainable development is a key element for Asian economies to transform to low carbon economy.

Dr Ma Jun believes that green capital can be mobilised through financial institutions, including banks, asset managers and insurance companies in capital markets.

Green bonds are flourishing in Asia

A green bond is an investment whose proceeds are used to fund environmentally-friendly projects. China is now the largest global issuer of green bonds, as the country tries to play a larger role to contain climate change and fight pollution.

Hong Kong authorities this year announced a green bond issuance program that, at up to US $12.7 billion, is potentially the world’s largest sovereign green bond program to date.

Efforts to develop green bond markets are also underway elsewhere in the region.

Singapore launched its Green Bond Grant Scheme earlier this year. Thailand issued a US$100 million sustainability bond, which differentiates itself from a green bond by financing projects that not only bring environmental but social-economic benefits as well.

These markets cater to a growing segment of investors not content with deriving profits from traditional polluting industries.

Engaging the private sector to invest in climate solutions

The International Finance Corporation (IFC) highlighted a set of priorities for countries seeking to attract private investment in climate projects, including the targeting of public finance to catalyse broader action.

Blended finance, the strategic use of development finance to mobilize private capital flows to emerging and frontier markets, can be a useful tool to kick-start climate projects in developing countries.

It enables investments in areas where private investors are concerned about high risks through concessional funding from public sources. This demonstrates the viability of the project and paves way for financing on fully commercial terms.

“Countries like Mozambique, Angola, Nepal have the possibility to use solar power, wind power, smart technologies and there is very high increase in energy demand. Unfortunately, current private financing is not tackling those projects because country risk is too high”, says Kai Mykkänen, Finland’s Minister for Foreign Trade and Development.

“With blended finance, they can change the energy transition of those countries with greater impact than just donating to solar projects.”

In Thailand, IFC provided $4 million in concessional finance that helped bring some of Thailand’s first solar PV farms online in 2011. The country’s solar PV market is now considered one of the most attractive among the world’s emerging economies.

The first solar project was able to attract over US$800 million of investment within a few years, avoiding over 200,000 tons of CO2 emissions annually – the equivalent of taking more than 40,000 cars off the road.

In Mexico, $15 million in concessional financing launched one of the first privately financed wind farms in the country, demonstrating market feasibility to investors.

Given the costly impacts of climate change – extreme weather and air pollution have cost more than $240 billion a year for the last 10 years in the US alone – investments in green projects to increase climate resilience can be a long-run payoff.

“In order to scale-up investment, investors and governments alike need to see that the investing in low-carbon, climate-resilient activities is a smart investment decision.” said Dr Angela Falconer, Associate Director at Climate Policy Initiative. Climate investments can “grow economies, achieve profitability, and generate financial returns, in addition to the benefits for human well-being and the environment.”

Kerr, Tom. “How to Unlock Private Investment for Climate Action”, UNFCC. May 2017.