The Fall and Rise of the American Grey Wolf 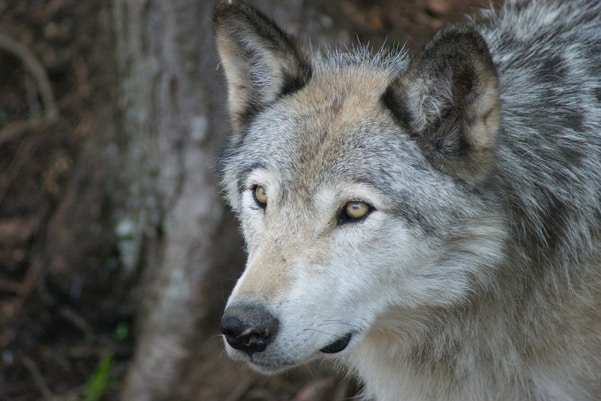 On a cold and snowy day in 1926, the two remaining grey wolves in Yellowstone National Park were killed by park rangers. This singular moment of man-on-wolf violence marked the end of a decades-long extermination campaign against Yellowstone’s apex predator, and the howl of the American grey wolf was silenced for generations. Fortunately, thanks to a wave of environmental campaigns in the 70’s and 80’s, the wolf achieved a miraculous return to Yellowstone and has healed the ecosystem to an extent that no one could have imagined.

Standing nearly a metre at the shoulders and between 1.2- and 1.8m from nose to tip of the tail, grey wolves can weigh up to 58kgs and sprint at paces of up to 56km/h. These massive canines are the largest members of the dog family and possess intensely acute senses of smell and night vision. The eyes of wolves are piercing – they are striking blue as pups and transition to shades of light yellow, brown, and gold upon adulthood.

Grey wolves are extraordinarily social animals and live in packs with intricate familial dynamics. A pack typically consists of 6-10 wolves, with an alpha male and an alpha female leading their ‘subordinates’. Usually, the alpha male and alpha female are the only wolves in the pack to mate. Each wolf possesses unique personality traits and upholds its own allocated role within the pack. Wolf packs work together to collectively raise and care for pups, hunt down large prey, and defend their expansive territories. Wolves roam large distances with their packs and have been known to travel up to 19km in a single day.

Wolves howl to facilitate intra-pack communication, defend their territories from invading packs, coordinate social activities, and sometimes, like dogs, simply because they hear the howling of others. These piercing calls can be heard for 11km in forested areas and for 16 km in open areas.

Despite their large statures, fierce pack ties and status as top predators, wolves tend to live short and tumultuous lives. Interaction between packs is typically aggressive and often fatal, with 65% of collared wolves ultimately being killed by wolves in rival packs. The lifespan of a grey wolf is generally around 4-5 years within the protection of Yellowstone National Park and just 2-3 years outside of the park’s borders.

Grey wolves once roamed freely across an enormous range from the Arctic tundra to Mexico. However, once settlers began expanding westward in the late 19th century, much of the wolves’ natural prey and habitat was eliminated due to the spread of agriculture and ranching. Naturally, wolves began to prey on domestic livestock, which threatened the livelihoods of Western ranchers. Big-game hunters viewed wolves as hunting competition, and many humans harboured a general fear of these massive canines.

Coordinated grey wolf extirpation programs quickly ensued, with the practice of bounty hunting supported by both state and federal agencies. The two remaining wolves in Yellowstone, still pups at the time, were killed by park rangers in 1926. By the mid 1900’s, wolves were almost entirely eliminated from the lower 48 states.

With the region’s apex predator forcefully eliminated, the ecological systems of Yellowstone and the surrounding areas became severely imbalanced. The elk population exploded, which led to overgrazing of vital willow and aspen plants, which beavers depend upon for food and shelter. With fewer beavers and dams, water temperatures rose too high to support cold-water fish. Songbird populations diminished, coyote populations surged and riverbanks began to erode.

When the Endangered Species Act came into effect in 1973, grey wolves were one of the first species to be added to the list of endangered species. But because of the deep controversy surrounding the grey wolf, true conservation efforts did not take place until the 1990’s.

January of 1995 kicked off one of the most successful conservation endeavours in history. 14 grey wolves were captured in Canada, transported to Yellowstone, and following a 10-week environmental acclimation program, were released into the wilderness of the park. 17 more wolves were reintroduced into Yellowstone in 1996.

The ecological restoration that followed was stunning. The beavers returned, elk populations stabilised, songbirds rebounded, and cold-water fish, willows and aspen flourished once again. Doug Smith, senior wildlife biologist from the Yellowstone Wolf Project, compared these magnificent ecological changes to ‘kicking a pebble down a mountain slope where conditions were just right that a falling pebble could trigger an avalanche of change’.

As of 2020, which marks the 25th anniversary of the reintroduction of the grey wolf, there are at least 94 wolves and 8 separate packs living within the wilderness of Yellowstone National Park.

Although their populations are stable, grey wolves are still threatened by fear and misinformation. Despite ongoing narratives that they present dangers to humans and livestock, wolves almost never attack humans, and they kill only 0.2% – 0.3% of available livestock. Grey wolves are also threatened by laws in Montana and Wyoming, which allow them to be hunted outside of national park borders.

In the words of Jamie Clark, president and CEO of Defenders of Wildlife, “It’s not finished…We still have a lot of conflict, and concerns.” However, regardless of the challenges ahead, the grey wolf has undeniably become a glimmering icon of hope amidst a multitude of endangered species and ecosystems in need of saving.

The howl of the wolf is here to stay. It is now time to answer the calls of all other struggling species, so that they too can maintain their places within the symphony of the wild. Doing so will not only allow individual species to flourish, but will also help to preserve ecosystems all over the world.