Arctic sea ice cover has unexpectedly hit a new record low in July 2021 despite a relatively cool spring in the Arctic.  Studies have linked higher temperatures during the spring and summer combined with declining rates of regrowth in the fall and winter for the rapidly diminishing ice cover.

Sea ice cover in the Arctic Ocean hit a record low on July 5 for this time of year, surpassing even the year 2012 which went on to see the lowest annual minimum extent since satellite records began in 1979. Extent fell to 8.867 million sq k  of ice cover on July 5, 2021.

2021’s early July drop was unexpected by some observers due to a cool stormy spring in the Arctic which in the past might have put a brake on the melt season, though a Russian heatwave is now stoking Laptev Sea melt, while warmth over Hudson Bay has caused ice there to disappear earlier than typical.

Ice extent in 2020 (the second lowest extent record holder) tracked fairly closely to 2021, though above what we’re seeing right now. However, spring and early summer 2020 were hotter and sunnier than this year, meaning that the thinner first year ice seems to be melting at record rates despite cooler, stormier weather conditions.

The sea ice melt stalled sufficiently enough in late summer 2020 to avoid hitting a new record low, and anything could still happen this year. “July is the critical month — it’s the warmest month in the Arctic and that’s when melt will be the most extreme,” says Mark Serreze, director of the National Snow and Ice Data Center. “We’re setting up close to the record right now. But what happens over the next month will be very telling.”

Though ice conditions in the Beaufort Sea north of Alaska have been good, resisting melt, the situation in the Laptev Sea, one of the large marginal seas of the Arctic Ocean, has been bad. The Laptev has experienced record sea ice lows since last year, driving the region’s overall ice extent this year way down. “There are really big open water areas there along the Russian Coast, even around 80 degrees north latitude,” notes Serreze.

In 2020, the Laptev Sea was at its lowest ice extent on record from late June until early November, corresponding with a huge heatwave which pummelled Siberia. On June 17, air temperatures of around 38 degrees Celsius (100.4 degrees Fahrenheit) were recorded in Verkhoyansk, a city south of the Laptev Sea. Moreover, the record-breaking heatwave coincided with the summer solstice, the longest day of the year, when solar radiation is at its highest. All of this solar heat absorbed by the dark ocean water likely stalled the ice’s regrowth come autumn, contributing to this year’s record low.

The heat over Siberia hasn’t abated much — scientists say that western North America and northeast Asia are now the world’s two fastest-warming spots in summer. This year, the town of Oymyakon, Russia, considered the coldest inhabited place on Earth, reached 31.6 degrees Celsius (88.8 degrees Fahrenheit) on June 29, the hottest it’s ever been at this time of year. That heat is now flowing out over the Laptev Sea.

The escalating loss of Arctic sea ice is being driven by two major factors, occurring over all four seasons: melting during the spring and summer, and, now, declining regrowth in the fall and winter.

Sea ice forms when the upper 100 meters or so of the Arctic Ocean reaches below -1.8 degrees Celsius (28.7 degrees Fahrenheit). At this point, the water fills with small ice crystals that will slowly coalesce into larger floes. But as ocean surface temperatures warm, the ice is taking longer to grow — if it grows at all.

A recent Journal of Climate study by researchers at the Alfred Wegener Institute found that increasing air temperatures and the intrusion of warm water from the North Atlantic into the Barents and Kara Seas — a climate change-driven process known as Atlantification — are overpowering the ice’s ability to regrow in winter. “Because of less ice growth in the winter, sea ice will be more vulnerable to melting in the summer, especially with strong storms,” explains Robert Ricker, lead author of the study and a climate scientist at AWI’s Helmholtz Center for Polar and Marine Research in Germany.

In the recent past, scientists had thought that sea ice could recover in winter, even if following a strong summer melt, because thin, first-year ice grows faster than thick ice. But these new findings indicate this no longer holds true; heat from the ocean has overwhelmed this once-stabilising effect. Ricker and his colleagues found that between 2002 and 2019, the growth of sea ice volume in the Barents and Kara Seas declined by an average of two cubic k (0.5 sq m) in every month between November and March.

This has led to a northward retreating ice edge and thinner sea ice in the eastern Eurasian Basin. Moreover, four of the last five years have seen the lowest annual maximum Arctic-wide sea ice extents in March — the period when ice extent is at its greatest in winter.

It’s unlikely these changes will be limited to the Barents and Kara Seas, as the ice continues melting from above and below. “We’ve already seen some impact in the Laptev Sea,” explains Ricker. In the marginal seas around Alaska, an influx of warm Pacific water in the future is likely to yield similar changes.

Thinning Near the Shore

Predicting precisely where, when, and how Arctic Ocean ice will change is a tricky task for scientists. But in a modelling study published last month, researchers found that sea ice in coastal areas may be thinning at up to twice the pace as previously thought.

Polar scientists determine sea ice thickness — and, ultimately, volume — by measuring the height of the ice above the water, using satellite technology. But this rudimentary measurement has long been confused by the snow that collects atop the sea ice and weighs it down, pushing it below the surface. In the past, researchers attempted to correct for this by using old snow maps of snow depth, but these didn’t adjust for how much snow cover can vary year to year.

When researchers used a new computer model designed to estimate snow depth variations, they found that sea ice in coastal regions was being lost much faster than previously thought. This loss corresponds to where snow cover has been decreasing faster. “We can observe how quickly the ice is reducing in area, but the thinning of the ice is the thing we haven’t been able to observe well,” explains Julienne Stroeve, a senior research scientist at National Snow and Ice Data Center.

In three coastal seas — Laptev, Kara, and Chukchi — the rate of coastal ice decline increased by 70%, 98%, and 110% respectively compared to earlier models. With the white, heat-reflecting coastal ice gone, replaced by dark, heat-absorbing ocean, the albedo effect melts more ice even farther out at sea. As years pass, sea ice in these regions is not surviving the summer melt.

“If [coastal ice is] thinning faster, then that transition to a seasonal ice-free Arctic Ocean might happen faster than we think,” says Stroeve.

Until very recently, the Central Arctic Basin and the Canadian Archipelago have withstood the annual coastal summer heat assault, with the Arctic Ocean north of the archipelago evocatively named the Last Ice Area, where the thickest, oldest sea ice is expected to remain longer than anywhere else. That’s largely because the Beaufort Gyre, a circular ocean current north of Alaska, often keeps ice trapped north of Canada’s Arctic islands for years, even as climate change wreaks havoc on the lower latitudes and various Arctic seas

However, this bastion may now be at risk. Last August, scientists aboard the research ship Polarstern, passed through the Wandel Sea — just north of Greenland and part of the Last Ice Area — on their way to the North Pole with the Mosaic expedition. They found disconcertingly low sea ice concentrations.

It was the second noteworthy event in less than three years in the Last Ice Area. In 2018, a large polynya — open water surrounded by sea ice — formed there as unusual northward winds drove sea ice away from the Greenland coast.

By August 14, 2020, sea ice cover in the Wandel Sea reached a record low. Now, a paper in Nature, suggests that sea ice in the Last Ice Area may not be as stable as scientists previously believed. Increasingly, even the thickest multi-year sea is thinning out because of climate change. Arctic multi-year ice surviving from year to year has declined from a maximum total of 16% of all ice in 1985, to just 1% today. 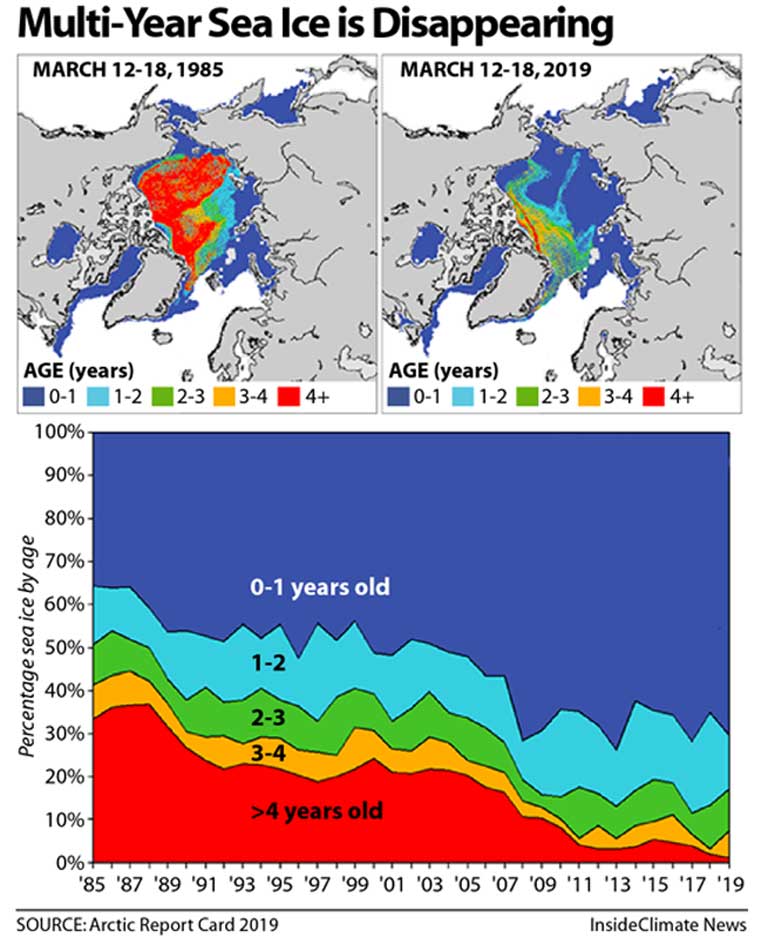 Such findings heighten concerns for Arctic marine mammals, like polar bears and walrus, who are dependent on coastal ice and will need to use the Last Ice Area as a refuge in coming decades as the rest of the Arctic’s sea ice disappears.

In light of these new findings the study’s authors wrote, “with continued thinning, more frequent low summer sea ice events are expected. We suggest that the Last Ice Area… is less resilient to warming than previously thought.”

Whether it’s warm water flowing from the North Atlantic into the Barents and Kara Seas, intense heatwaves over the Laptev, increased coastal sea ice thinning, or the Last Ice Area potentially melting away far sooner than expected, things aren’t looking good for the state of Arctic ice. Nor for the world, which relies on this icy region for its cooling moderation in a quickly warming world.