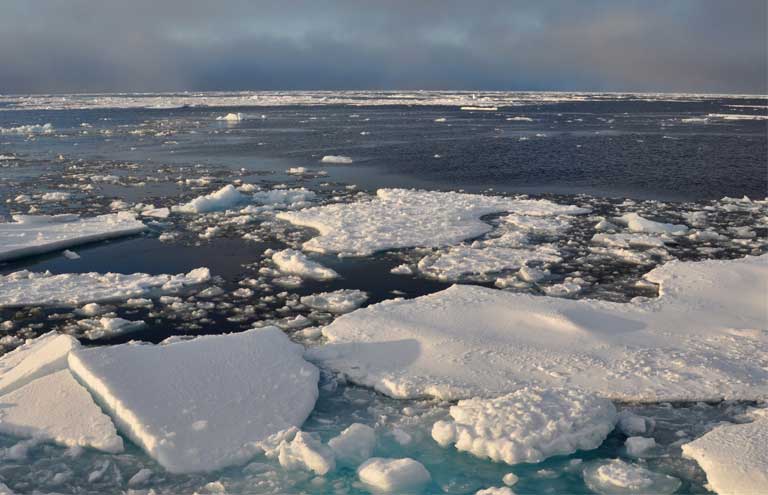 On March 12, sea ice floating atop the Arctic Ocean reached its greatest extent for the year, covering 14.750 million square kilometres (5.70 million square miles). With the exception of last winter, when sea ice reached just 15.047 million square kilometres (5.8 million square miles), sea ice extent in March 2021 was significantly above recent warm years which have put winter sea ice in jeopardy. This year ranks as the 7th lowest maximum extent since the satellite record began in 1978. Last year was the hottest on record, and, accordingly, sea ice saw its second lowest extent at the September minimum. This winter might indicate a modest recovery — but there’s a caveat: winter maximums seem to have little correlation to summer minimums. And, moreover, the ice in the Arctic is thin.

“Volume keeps going down,” says Mark Serreze, director of the National Snow and Ice Data Center. “We’re still below average [extent] in the Bering Sea and around Svalbard [on the Arctic’s Atlantic Ocean side]. It’s pretty thin ice along the Labrador coast, too.” According to NSIDC data, September Arctic sea ice extent is decreasing at an average rate of 13.1% per decade.

Perhaps the bigger story this winter is a sudden blackout of U.S. ice data reporting and processing at the end of February, with two days’ worth of data unrecoverable. Every day, the NSIDC uploads sea ice extent figures to the ChArctic graph. The blackout occurred just as ice extent was beginning to dip around February 19, dropping to below 14.3 million square kilometres (5.52 million square miles), before growing again. Sea ice enthusiasts were in a panic.

“We had a data outage and it exposed a deficiency in our software,” explains Serreze. “It was a unique situation that the code wasn’t prepared for. That’s the challenge of doing data processing in near real-time.… If there’s a glitch like that you can get caught with your pants down.”

Arctic scientists weren’t too concerned about this brief blip, though NSIDC has previously warned about a much bigger worry: a potential lapse in continuous sea ice monitoring due to aging satellite infrastructure. The center relies on data from Department of Defense satellites. After the failure of a newer satellite launched in 2014, and the scrapping of another, the center has been left to rely only on the DMSP-F18 satellite, already in orbit for more than a decade. Its failure would disrupt a continuous Arctic sea ice record going back to 1978.

“We’re kind of limping along,” the NSIDC scientist says. “We’re in a vulnerable situation.” The Biden administration is aware of the problem, Serreze told Mongabay, though he’s unsure if it’s a high priority on a long federal to-do list.

“Earth’s ice is extremely sensitive to changes in environment and once the delicate balance is upset a number of positive feedback mechanisms kick in that exacerbate the melting,” explains Isobel Lawrence, a research fellow at the Leeds’ Center for Polar Observation and Modelling. Under past circumstances, all that white sea ice would reflect solar radiation back into the atmosphere, maintaining cooler polar temperatures. With the sea ice gone, the dark ocean now absorbs that heat which exacerbates ocean and atmospheric warming.

Every December, ‘ice arches’ form in the northern or southern part of the Nares Strait. The arches are created when thick ice piles up in the narrow strait, essentially forming an icy traffic jam. These blockades cut off the export of sea ice from the Arctic Ocean out into Baffin Bay where it quickly melts. The annual Nares arches are also crucial for the formation of the North Water Polynya (at the northern mouth of Baffin Bay) which acts as a productive foraging ground for Arctic species like belugas, narwhals, and polar bears.

When researchers recently assessed the stability of these ice arches, they found a troubling trend.

In a Nature Communications study published in January, scientists determined that the average duration of these arches is decreasing about a week every year. Today, the Nares arches are in place about 100 fewer days than they were two decades ago.

As a result, the transport of old, thick multiyear ice out of the Nares Strait doubled from around 42,000 square kilometres (16,216 square miles) of ice annually in the late 1990s, to 86,000 square kilometres (33,204 square miles) today. During the winter of 2007, one of the worst ice extent years, neither the northern or southern arch formed. And in 2019, the northern ice arch broke up in late March — about four months ahead of past schedules. Arctic ice watchers are now closely watching to see what happens in 2021.

Even by 2050, when much of the Arctic Ocean is expected to be ice-free in summer, Arctic scientists believe that ice will persist in the area around the Canadian Arctic Archipelago.

People “make a big deal about this Last Ice Area because it will act as a refuge for ice-dependent species,” says Kent Moore, lead author of the study and an atmospheric physicist at the University of Toronto. “The arches and the fact they’re less stable is another indication that this Last Ice Area may not be stable as people think…. It may not last as long as we hope it will last. That’s a big concern because we’re banking on it to be a refuge.”