Microplastics in Water: Threats and Solutions

Every year, more than 8 million tonnes of plastic waste enter the oceans. Microplastics, just like any other type of plastic, can take hundreds or even thousands of years to decompose. Its ecological impacts on the environment represent a looming threat that needs to be critically examined. We discuss how microplastics undermine different water bodies and possible solutions to solve one of the worst environmental issues of our lifetime.

Microplastics have been lurking around in every little corner of the environment, including air, soil and water. Drinking water, oceans, freshwater and water in the polar region are some of have been all found to contain high amounts of these toxic particles.

Microplastics have been found in drinking water, both tap water and bottled water. According to a research conducted in 2017, of the 159 samples collected from 14 countries, 83% were found to contain plastic particles. The US scored the highest contamination rate at 94%, while European nations, including the UK, Germany, and France had the lowest rate, despite still scoring a staggering 72%. 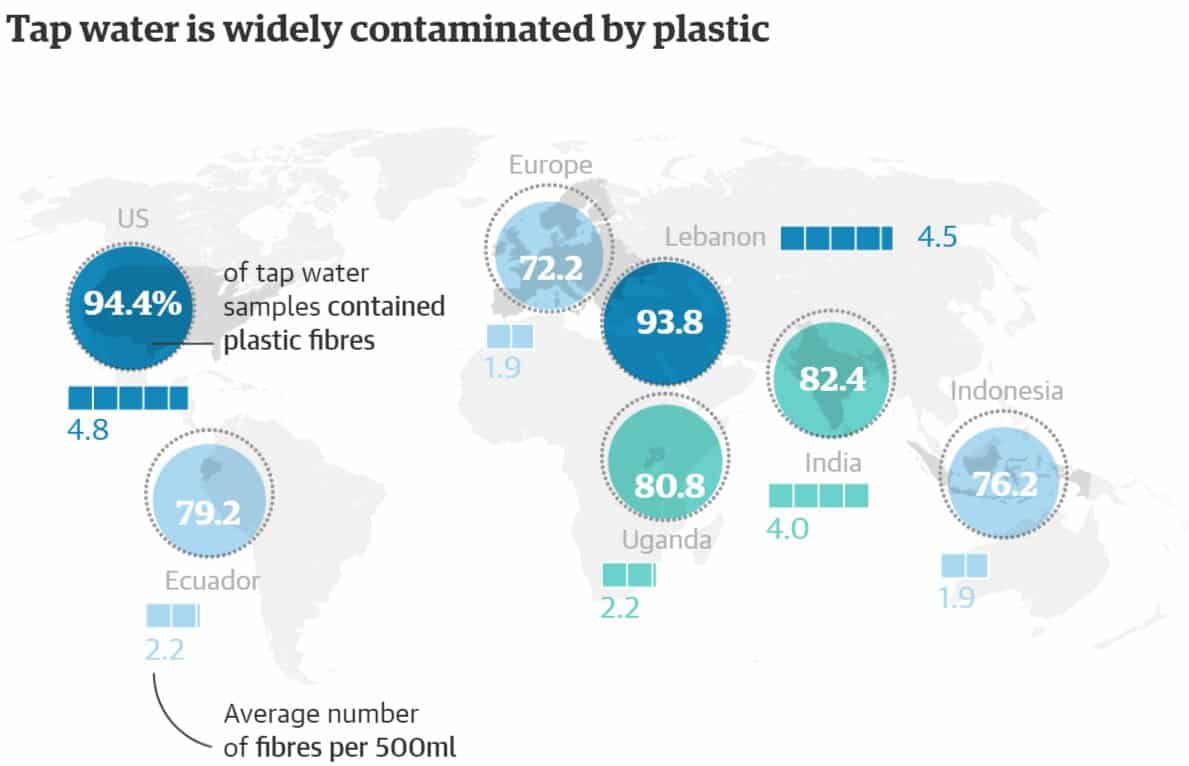 At first glance, this founding might seem to signal an alarming threat to human health. Yet – as stated by the World Health Organization (WTO) – no evidence so far has supported the claim that microplastics in drinking water pose big health hazards to humans.

According to the European Food Safety Authority, microplastics larger than 150 micrometer are unlikely to be absorbed in the human body, passing through the gut without being digested. The uptake of smaller particles is also expected to be limited. Chemical toxication from plastic is unlikely with its low exposure level in drinking water. The biofilms effect – which is the attaching and colonisation of microplastics from microorganisms, such as bacteria – is also reported to be negligible.

Given these findings, the World Health Organization (WTO) suggested we need not be too worried. With that being said, scientists admit that more research is needed for further accuracy.

“Based on the conclusions of our report, while we think that the risks to human health are low, this is based on a limited evidence base and we recognise that there is need for more research,” said Jennifer de France, technical expert on water, sanitation and hygiene at the Department of Public Health and Environment at World Health Organization (WHO).

The potential risk of microplastics in drinking water therefore remains a concern. The European Drinking Water Directive (DWD) has aimed to include microplastic on the watch list of emerging compounds by 2024, encouraging member states to take preventive measures to reduce microplastic in case too high numbers are reported.

It is also worth noting that, though microplastic in drinking water may not have major health impacts on humans, its detrimental effects can still be imposed through inhalation, dermal contact, and food consumption.

Microplastics in the Ocean

The ill-famed Great Pacific Garbage Patch – a collection of debris including microplastics in the North Pacific Ocean – has raised grave concerns toward the danger that microplastics pose to the marine ecosystem. Research conducted in 2021 estimated that there were 24.4 trillion pieces of microplastics in the world’s upper oceans, with a combined weight of 82,000 to 578,000 tons, equivalent to roughly 30 billion 500-ml plastic water bottles.

Though its impacts from drinking water may be limited on human health, microplastic is found to be harmful, if not fatal, to aquatic species. The entanglement effect is notorious for threatening the aquatic life by means of drowning, suffocating or strangulating. 55% of marine organisms incidences are associated with entanglement, with sea turtles, seabirds and crustaceans among the most threatened animal species. Other than the entanglement effect, ingestion of microplastic also jeopardises the health of marine life, contributing to 31% of all incidences.

Microplastic contamination has been found in natural freshwater systems, including wetlands, lakes and rivers around the globe. Lake Superior in North America, Swiss lakes in Europe, and Lake Taihu in China have been all found to contain large amounts of microplastics. Their concentration, however, differs: the surface water of lakes in China and Saudi Arabia have been found to be much more contaminated than waterbodies in other countries in Europe, North America and Africa, suggesting that developing nations are dealing with a much more severe microplastic problem.

A 2022 study found that microplastic accumulates within the freshwater systems, especially at the source of river or stream, the area where pollutants usually reside the longest because of the relatively low speed of flow of water there. The source may take up to seven years to move just one kilometre during the low-flow conditions, favouring the piling up of microplastics.

Organisms that live in this area, including some marine animals, are thus more prone to ingestion of microplastics. Plastic debris stored in animals eventually enters the food web and human diets, potentially degrading the whole food chain. In 2016 and 2017, Loyola University Chicago biologists sampled 74 fish from the Muskegon and St. Joseph rivers in Michigan and the Milwaukee River in Wisconsin. Their research concluded that 85% of the sampled fish had microplastics in their digestive tract, with an average of 13 particles per fish. Another study conducted in 2020 found microplastic fragments in human placentas, yet another evidence that microplastics have been passing through the food chain.

“The retention of microplastics we observed wasn’t a surprise because we already understood this happens with natural organic particles,” said Aaron Packman, professor of Civil and Environmental Engineering at Northwestern’s McCormick School of Engineering and director of the Northwestern Center for Water Research. “The difference is that natural particles biodegrade, whereas a lot of plastics just accumulate. Because plastics don’t degrade, they stay in the freshwater environment for a long time – until they are washed out by river flow.”

With this information provided, Packman suggested researchers to further assess and understand the long-term impacts of microplastic pollution on freshwater systems.

Further away from populated cities and commercial activities, the polar regions may be thought to be free from microplastic pollution. Yet, this plastic debris has been spotted in the ice cores and snow within both the Arctic and Antarctic regions, and is found to be transported to those areas through dusts, wind, ocean currents, as well as other meteorological conditions.

In the Arctic region, it is found that 2.04 trillion cubic metres of ice will melt in the coming time span due to climate change, releasing at least one trillion pieces of stored plastic. As for Antarctica, microplastics had been found in freshly fallen snow for the first time in 2022, estimated to have contained 29 microplastic particles per litre of melted snow, higher than the concentrations reported previously in Antarctic sea ice, which was an average of about 12 pieces of plastic per litre of water.

The microplastic pollution in the sea ice in Antarctica will impede, if not paralyse, the marine food chain.

“Sea ice is habitat for key foraging species,” said professor Delphine Lannuzel from the Institute for Marine and Antarctic Studies at the University of Tasmania. “Krill defines everything else in the food chain and it relies on sea ice algae to grow. When you think now that sea ice algae is associated to plastics, you can think about the bioaccumulation of the plastics in krill and in whales.”

Besides its catastrophic impacts brought to the polar region, microplastics also exacerbate and accelerate global warming. Snowfields, ice caps and glaciers around the polar are already melting more rapidly than ever before. Though clean snowpacks, icefields and glaciers can reflect much of the sunlight, scientists had found that dark-coloured microplastics deposited at these locations can worsen the situation by absorbing sunlight and thus enhancing local heating.

How Can We Solve Microplastics Pollution in Water Bodies?

Different programs have been carried out to raise awareness of the issue. The United Nations Environmental Programme (UNEP) has been promoting less plastic use, encouraging recycling, and evaluating disposal facilities. Educational measures were set up, engaging over 40 million people from 120 countries. Another program was also initiated in 2011 under the Joint Declaration of the Global Plastics Associations. It aims to reduce waste and outline commitment to support a number of assessments toward littering.

A groundbreaking invention – the so-called robo-fish – has provided us with another solution for tackling microplastics in water. This robot fish is designed to be self-propelled, swimming around and latching onto free-floating microplastics. These particles contain organic dyes, antibiotics, and heavy metals, which have strong chemical bonds and electrostatic interactions with the fish’s materials. The microplastics will then cling to the surface of the fish, allowing it to collect and remove microplastics from the water. Though the robo-fish can now only works on water surfaces, scientists are already working to develop a more functionally complex fish that can explore deeper waters.

Besides clean-up programs and technological innovation, individuals can also play a key role in reducing microplastic in water. Products that are made with bio-based and biodegradable plastics and wrapped in sustainable packaging can be favoured as an alternative to conventional plastics products. Recycling and reusing plastic products will be as effective remedies if every individual actively participates.

EO’s Position: We have all the instruments we need to drastically reduce the detrimental impact of the food packaging industry on the environment. While consumers can do their part by shopping more consciously at grocery stores and bringing reusable containers when getting takeaway food, the situation will not change unless food retailers and restaurants step up the game as well. If we want to cut packaging waste, we need big companies to take the lead and make the necessary switch to more sustainable food packaging alternatives.

Charlie is currently an undergraduate student at the University of Hong Kong. Majoring in Economics, she is interested in how public policies can be used to solve environmental problems, and how individuals can make a difference within the scope of microeconomics. She is currently working as a contributing writer at Earth.Org.