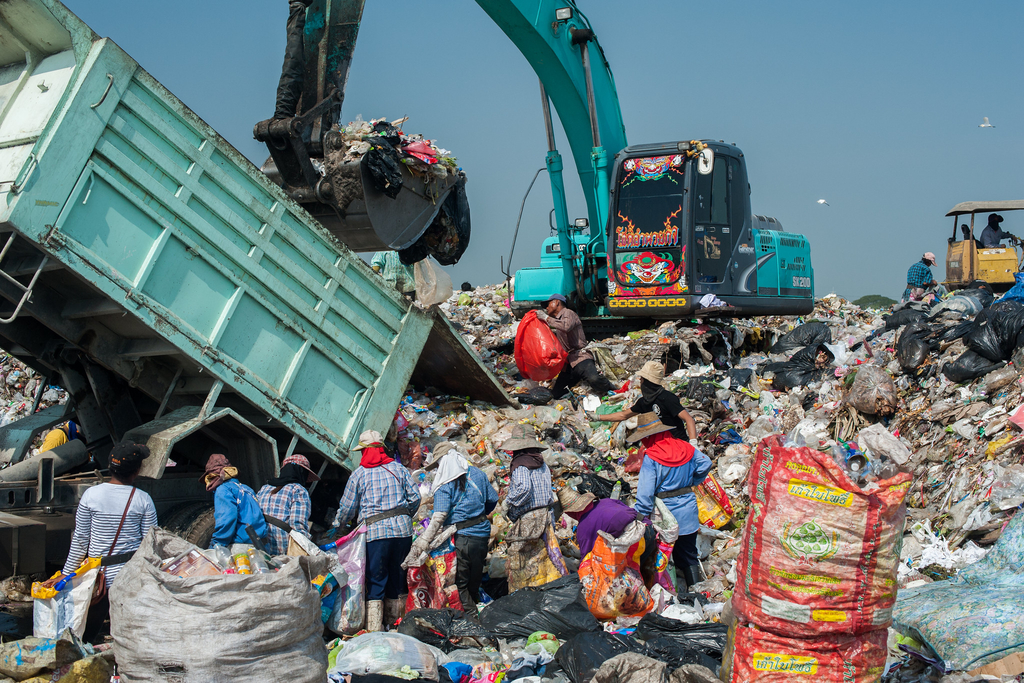 Efforts are being made in various places around Asia, including China, India, Singapore and Hong Kong, to combat the plastic waste crisis. What do they include and how effective are they?

China has announced plans to ban all single-use plastics by 2025, replacing them with bio-products and non-plastic products. In a country where the standard of living is continuously improving, demand for plastic goods will no doubt follow. Can China show the world that it is capable of a ‘green revolution’?

Straws, plastic bags, and cutlery are all being targeted under the new legislation. It doesn’t stop there: shampoo and conditioner miniatures will no longer be offered during hotel stays either. Landfills in China are overflowing faster than anyone imagined, and the problem can no longer be ignored. In 2017, China implemented a ban on foreign plastic waste. For a country that has imported a cumulative 45% of plastic waste since 1992, this is a drastic move, one signaling a changing attitude towards plastics and waste management.

Pek Hai Lin, executive director of Singapore-based environmental group Zero Waste SG, says that the ban may have resulted in an excess supply of recyclable materials across countries and a drop in the prices.

She says, “With buying prices of cardboard going as low as 4 cents per kg, it might not be worth the effort on collectors’ part to recycle much of it.” Prices used to be around 10 cents per kg prior to the ban.

The new ban will outlaw the distribution of single use straws and plastic bags in major cities by the end of 2020. This is certainly a lofty goal in a country of 1.4 billion, but the ban will occur in stages, with the final goal of banning all single use plastics in all cities and towns by 2025. This format of the ban, initially starting with certain restrictions and advancing to a complete ban over time, is meant to ease Chinese residents into the transition. If the recent ban on plastic bags in New York is any indication, it is a good idea to bolster public education campaigns and awareness-building to ensure that the policy is effective and well-received.

The ban was announced in January of this year, and outlines a commitment to utilising alternative materials instead of plastic, which could include compostable plastics.

Less Plastic= More Reliance on What?

China is the world’s largest plastic producer, and is responsible for 30% of global marine plastic pollution. Between 5 and 12 million metric tons of plastic are produced in China each month.

For a major oil-dependent country like China, the ban will create a heavier reliance on alternatives to petroleum-based products. The new policy states that the Chinese government will ‘promote the use of non-plastic products’, including cloth, paper, and degradable bags, and establish a system to reuse shopping bags in shopping centers. There is also a focus on ‘bio-based’ products made from plant materials that will compost or biodegrade.

Production of these bio-plastics is expected to climb by more than 15% per year up to at least 2022 in China. Despite the rising popularity of these products, production remains insignificant with just 2.27 million tonnes produced in 2017, compared to a global plastic production of 335 million tonnes.

Banning plastic is not as simple as it may seem. In addition to educating the public and enlisting support from the communities affected, cities and towns must be able to successfully dispose of the new kinds of replacement products. China plans to beef up and revamp domestic recycling capabilities in order to manage this new kind of waste. In 2017 China announced a goal of recycling 35 percent of waste by 2020. To do so, cities will be setting up recycling facilities, building waste transport systems, creating online information resources and discouraging waste by charging for disposal. Steps towards this goal include setting targets and launching pilot programs. One such program to manage waste in Shanghai focuses on improving the sorting of waste, while also creating 10 new recycling centers in the one city alone. A modern recycling system in China may also require imported technology and expertise, according to Plastic Recycling Update. By the end of 2020, cities including Beijing, Shanghai, Tianjin, Chongqing and all capitals of provincial regions will be required to have their plans and regulations in place.

According to a news release, Weng Yunxuan, secretary-general of the China Plastic Processing Industry Association’s degradable plastic committee is optimistic about the plans; “The ban will not be imposed all of a sudden, but phase by phase. The current production capacity (for substitute products) in China will not fail to meet the market gap caused by the ban.”

Producing these substitutes may not be an issue, but for a country that either burns- nearly half of the country’s waste is burned in incinerators- or sends to landfills nearly all of it’s trash, effective recycling systems are a necessity and enforcement of the ban has to be reliable to show the rest of Asia, and the world, that banning plastic waste is a feasible solution.

China is not the only country in Asia imposing bans on plastic waste. According to the Central Pollution Control Board, India generates 26 000 tonnes of plastic waste every day. Beginning in 2018, India’s government imposed a ban on plastics in the state of Maharashtra, however pushback from the plastic lobby and poor implementation of fines failed to curb the plastic tide. Eventually the government lifted the ban on several items including plastic bottles. The lack of programs in place to address waste management and the high cost of producing alternatives left people with few other options and illegal plastic trade boomed.

The government says that it will instead ask states to enforce existing rules against storing, manufacturing and using some single-use plastic products such as polythene bags and styrofoam, as well as educate the public on the ill-effects of plastic.

Regulations don’t exist in a vacuum, and therefore it is imperative for governments to work within cultural and social norms and existing economic structures if they hope to see success with plastic bans in the future.

These cities in Asia both have massive plastic waste problems, which will no doubt become all the worse as it can no longer send waste to China.

The government introduced the Plastic Shopping Bag Charging Scheme in 2009 and enhanced it in 2015 to reduce the use of plastic bags in the city. However, recent statistics from the Environmental Protection Department have indicated that the average daily disposal quantity of plastic bags in 2017 rose to 793 metric tons, just short of the 867 ton level recorded in 2008, a year before the levy scheme was introduced.

Furthermore, a recent survey showed that in supermarket chains, around 90% of vegetables and fruit are packaged in plastic, sometimes using multiple materials. This packaging problem has been made all the worse by the rise in popularity of online shopping.

There are continuous calls from environmentalists and consumers alike that the government should adopt tougher and more pro-active measures to regulate the use of plastic packaging. Additionally, recycling facilities in the city need to be bolstered.

In 2017, it was estimated that Hong Kong threw away 5.2 million bottles every day. According to Patrick Yeung Chung-wing, a project manager for ocean conservation at WWF Hong Kong, about 80% of the city’s marine litter is plastic, especially disposable products such as plastic bottles, plastic bags and packaging material.

Similarly, Singapore is battling to combat waste that is sent to landfills, however, it is making positive steps through public education.

Last year, the Republic sent almost three million tonnes of trash to its only landfill on Semakau Island- almost 30% of that was plastic waste, followed by food waste at 20%, and paper and cardboard waste at 19%.

While there was a 6% reduction in the total amount of waste generated last year compared with 2018, overall recycling rates to 59% from 61% in 2018, which could have been influenced by China’s ban on foreign plastic waste ; the Republic’s National Environment Agency (NEA) says that 34% of Singapore’s recyclables are exported, so ‘the status of the external market and policy of other countries towards recyclables would have a significant impact on our recycling rate’.

Last year, the government outlined its first Zero Waste Masterplan to reduce the amount of waste sent to its landfill by 30% by 2030, put in place to extend the landfill’s lifespan beyond the projected 2035.

While these cities in Asia are no doubt making efforts to tackle and reduce the plastic waste crisis plaguing them, it is essential that these policies and efforts are correctly regulated to avoid them making no significant gains or even collapsing. Without effective intervention by both states and citizens, the planet will continue to be inundated with plastic waste, which will have disastrous consequences for the health of the planet and those who inhabit it.

This piece was written with Ariella Simke.