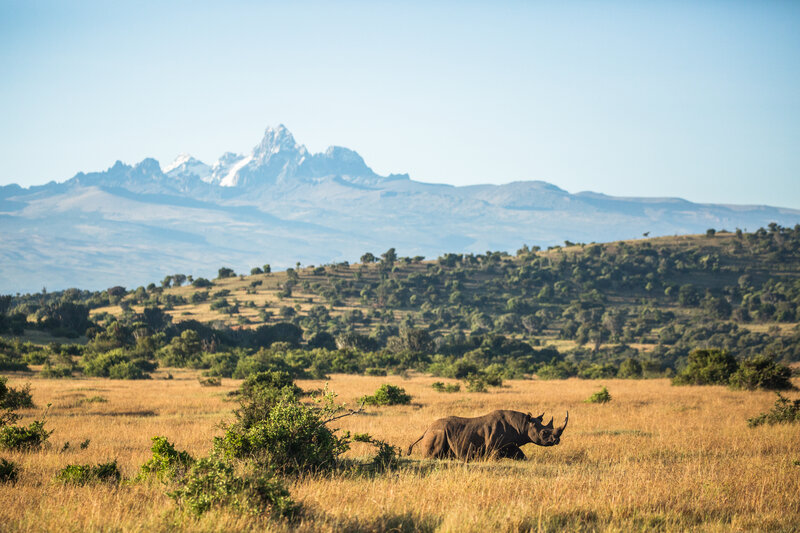 Borana Conservancy is a wildlife sanctuary situated at the foothills of Mount Kenya. Spreading over 13 000 hectares, it aims to provide a sustainable ecosystem for critically endangered species, including black rhinos, elephants, lions, reticulated giraffes and Grevy’s zebras. It has also shown commitment to the surrounding communities, ensuring a harmonious relationship between the animals and humans in their network.

In 2013, a founding population of 21 black rhinos was introduced to Borana Conservancy. Once they were settled and had established territories, the fence between Borana and the neighbouring Lewa Wildlife Conservancy was dropped, forming one landscape. This created over 92 000 acres of wilderness which now supports over 200 black and white rhinos, making it one of East Africa’s largest continuous rhino habitats.

In 2019, there were a total of 32 rhino births (17 black and 15 white) across the Lewa/ Borana Landscape. Populations for all other species are stable or increasing; since 2016, buffalo populations have risen by over 100% to a current population of over 2 000. The joint landscapes are home to 46% of Kenya’s black rhino population, 90% of the global population of the endangered Grevy’s zebra, over 7 000 elephants and many others.

Borana Conservancy is working to achieve carbon neutrality over the next three years. All of its houses and lodges are powered by solar farms with a combined total output of over 300 KVA. To achieve this carbon neutrality goal, it has set time bound targets with its carbon footprint measured on a monthly basis.

It also has a recycling eco centre at its headquarters. All properties sort waste on site and then the eco centre receives it and stores it. It also has a glass crusher that makes “eco-concrete” for buildings and has completely eliminated single-use plastics.

Moving forward, Borana Conservancy has launched the work on attaining UNESCO World Heritage Site status, which it hopes will lead onto II Ngwesi and the Mukogodo Forest.

Besides its wildlife conservation work, Borana has also shown its commitment to uplifting the community around it. Through the Borana Education Support Programme, it invests in primary, secondary and tertiary education through contributions to bursaries, faculty and facilities. The Conservancy also has a mobile clinic that administers thousands of services, including health education, family planning, HIV/AIDS counselling, immunisations and basic healthcare services. Altogether, Borana provides employment, pensions and health insurance to over 400 members of its immediate community.

Borana also works with women’s groups in the neighbouring area who make beaded products. These items are sold across the Conservancy’s properties, with all profits going back to the women’s groups.