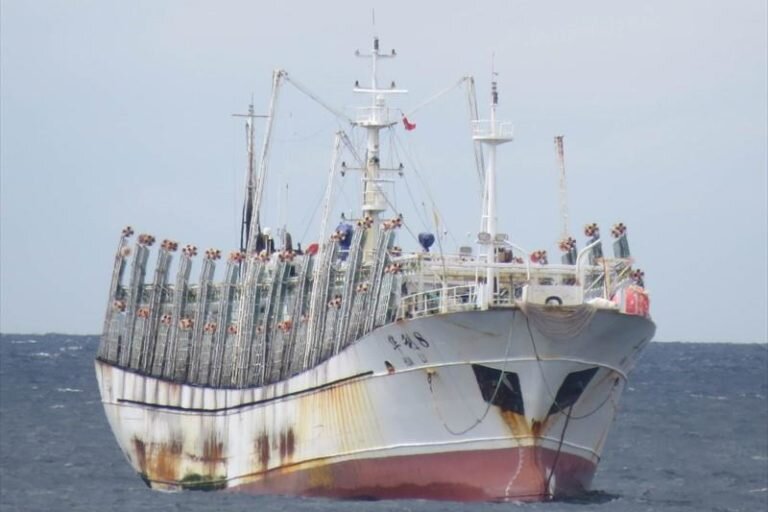 In early June, a fleet of around 260 Chinese vessels reached the limits of Ecuador’s exclusive economic zone around the Galápagos Islands to fish for Humboldt squid (Dosidicus gigas), engaging in illegal fishing. For months, the fleet skirted this area, drawing outrage among Ecuadorans as well as scientists and conservationists around the world.

The fleet remained in international waters and no ship crossed the country’s maritime limits, according to the Ecuadoran authorities, who detected no illegal actions. However, scientists and fishery analysts say the volume of fishing is so high as to potentially overexploit the squid. Moreover, the boats could be capturing species threatened with extinction. Beyond that, vessels within this Chinese fleet have a history of illegal fishing, according to Milko Schvartzman, a marine conservation specialist with the Argentine organization Circle of Environmental Policies, who has studied the fleet for years.

Experts say the presence of these ships is not only a problem for Ecuador but for other countries in the region, too. Every year they travel a route that goes from the South Atlantic off Argentina to the South Pacific near the Galápagos, passing through Chile and Peru. According to Schvartzman, at least two boats that have been caught illegally fishing in Argentine waters and were pursued by that country’s navy were fishing south of the Galápagos in August.

The Route of the Chinese Ships

Between December and May, in the western South Atlantic off Argentina, the controversial Chinese fleet fishes another species of squid, Illex argentinus. Then, between May and July, it moves to the Pacific, passing through the Strait of Magellan, and operates just outside the northern stretches of Chile’s exclusive economic zone. Next it continues toward Peru in the direction of the Galápagos. Then it makes a return trip.

“There are years that they start a little further north,” Schvartzman said. “This year the fleet started the season closer to Peru than to Chile but there have been years in which the fleet has been operating on the edge of Chile’s exclusive economic zone.”

These variations depend on the movement of the squid, said Max Bello, an ocean policy adviser with Mission Blue, a California-based NGO created by renowned oceanographer Sylvia Earle.

In Bello’s opinion, the difference is that this year the ships “have come much closer to the exclusive economic zone and two or three years ago we did not have the level of satellite information that we have today.”

Indeed, ship-tracking platforms, including Global Fishing Watch, show that “we are talking about a gigantic fleet,” said Luis Suárez, director of Conservation International-Ecuador. 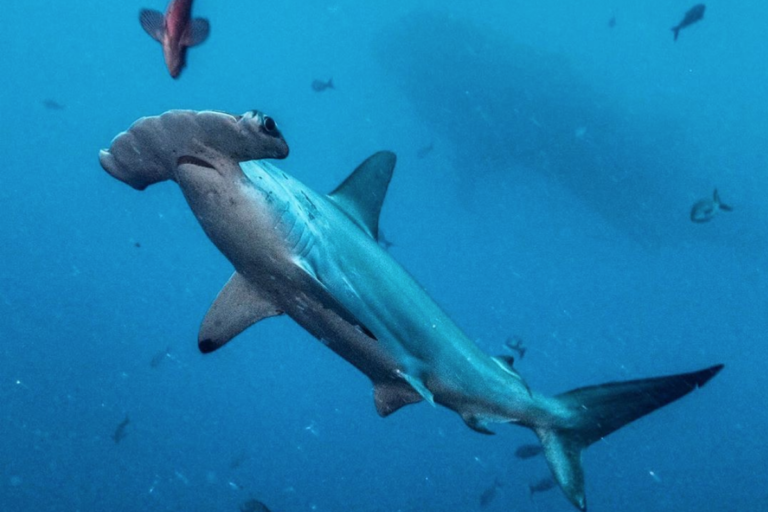 However, Bello said it is impossible to know exactly how many boats made up the fleet. “All the numbers we have are not real or official,” he said. “We don’t know how much they are really fishing either.” This is because these ships constantly change their registration, turn off their satellite transmitters and have no observers on board, he said.

A report released this month by the international NGO Oceana based on an analysis of the fleet’s behavior between July 13 and Aug. 13 on Global Fishing Watch tried to clarify the scope of the fleet and its activities. It put the number of Chinese vessels at 294, compared with 10 vessels from other nations, and claimed they logged a total of 73,000 hours fishing near the Galápagos. The report found 43 instances where the Chinese vessels in the fleet appeared to turn off their tracking devices, each for an average of two days, a common ploy to obscure illegal fishing activity, although there are innocuous explanations for such breaks, too, such as gaps in satellite coverage.

The large volumes of marine life these boats could be catching is the main concern for scientists. The overfishing of squid could cause ecological problems because various species, some of them emblematic of the Galápagos such as the scalloped hammerhead shark (Sphyrna lewini), feed mainly on them, according to Alex Hearn, a marine biologist and vice president of the California and Mexico-based NGO Migramar. Also, scientists fear that the ships are catching species threatened with extinction.

Industrial and artisanal fishermen in South America who fish for squid are also concerned, as are the companies that process the squid. Pascual Aguilera, a spokesperson for the National Coordinator of Jibieros a Chilean association of artisanal squid fishers, said the fleet “is like a city, a chain, a wall [of boats],” which settle in to fish at the 200-nautical-mile (370-kilometer) limit of the exclusive economic zone, where the territorial waters of each country end. That is why “we find that the resource is increasingly scarce. We have to go looking for it further and further,” the fisherman said.

Alfonso Miranda, president of the Committee for the Sustainable Management of the Giant Squid (CALAMASUR), added that the concern is greater because this fleet “has illegal and transgressive behaviour within our maritime domains.”

In fact, Schvartzman has identified at least two vessels within the Chinese fleet that recently fished outside the Galápagos territory that have a history of illegal fishing and were pursued by the Argentine Navy, captured and sanctioned.

One of those boats is the Hua Li 8. On Feb. 29, 2016, the vessel was detected illegally fishing 800 meters, about half a mile, within Argentine waters. The coast guard attempted to detain the vessel but it fled into international waters without even responding to the warning shots the navy fired.

A few days later, on March 3, the ship reentered Argentine waters. This time it was heading for the port of Montevideo, Uruguay. Argentina sent two coast guard ships and a helicopter to the area and began a five-hour chase. The ship managed to escape, but two months later it was captured by the Indonesian Navy.

This July and August, the Hua Li 8 was fishing outside the Galápagos exclusive economic zone, as Schvartzman confirmed via Global Fishing Watch. He said this is not an isolated event since the Lu Rong Yuan Yu 668, which the Argentine Navy also chased in April this year for illegally fishing, was there too.

“This is a regional problem and all countries have a responsibility. None of them are 100% victim,” Schvartzman said, pointing out that the countries provide logistical support to the vessels.

“Argentina has a responsibility because it should not release the captured ships,” he said. The offending vessels are taken to port, where they stay for a while and operators hit with a fine. “Purely economic sanctions are not enough to prevent, discourage and combat predation and illegal fishing,” Schvartzman’s organization, Circle of Environmental Policies, wrote in a document it presented to the Argentine Congress, which is currently working on a bill to toughen the sanctions against vessels caught fishing illegally.

Ecuador, for its part, has at least one oil tanker that supplies Asian vessels. Last year, the country’s navy detected the Ecuadoran vessel María del Carmen IV supplying fuel to the Chinese fleet while it was, like this year, fishing outside the Galápagos exclusive economic zone. The company that owns the ship, Oceanbat S.A, said in a statement addressed to the newspaper El Telégrafo, that it had all the proper permits to carry out its activities.

In addition, Schvartzman’s analysis shows that Panama has mother ships, known as reefers, that receive fish from Asian vessels on the high seas and take it to ports in Peru and Uruguay. The Oceana report documented six apparent transshipment encounters between different Chinese fishing vessels and a Panama-flagged reefer between mid-July and mid-August.

“It does not necessarily mean that the Chinese ship that passed the fish to the Panamanian reefer had been fishing illegally,” Schvartzman pointed out. However, he said, one of the reasons why such transfers, called transshipments, are carried out is to launder fish. “Reefers receive loads from many fishing boats made up of different species that were caught in different places. This [legally and illegally caught fish] is mixed in the hold and no one can later know which ship the cargo that arrives in the reefer belongs to,” he said. In fact, according to the FAO, transshipment is the biggest cause of illegal, unreported or unregulated fishing.

Flor Torrijos, director of the Panama Aquatic Resources Authority, told Mongabay that all Panamanian-flagged cargo ships must have an observer on board. “It is a mandate from the IATTC and Panama that all vessels that provide support to purse-seine vessels must have an observer onboard,” she said, referring to the Inter-American Tropical Tuna Commission, which manages tuna and other fisheries in the eastern Pacific Ocean. She added that there is “considerable control and surveillance over Panamanian vessels everywhere in the world and now especially in this area [around the Galápagos exclusive economic zone].”

“It is important that Latin American countries form an alliance to fight illegal fishing, and part of that is to prevent collaboration with this fleet,” Schvartzman said, referring to port services, transshipments and fuel supply.

President Lenín Moreno of Ecuador announced the formation of a team of experts to design a protection strategy for the Galápagos Islands. Private sector actors in the region — both artisanal and industrial, as well as squid-processing companies — also signed an agreement to demand the regulation and inspection of distant-water fleets, such as China’s.

Faced with pressure, in early August China announced a fishing ban on its boats in the vicinity of the Galápagos exclusive economic zone. Global Fishing Watch indicates that the fleet moved away from the Galápagos around the end of August. However, observers remain skeptical.

“It would be necessary to study whether this closure is going to have an effect or not,” Bello said. “It could be that it coincides with the time when the resource is no longer in that place and they are simply going to move the fleet from place to place, which is part of the normal action of the fishery.”

This article was originally published on Mongabay, written by Michelle Carrere, and is republished here as part of an editorial partnership with Earth.Org.