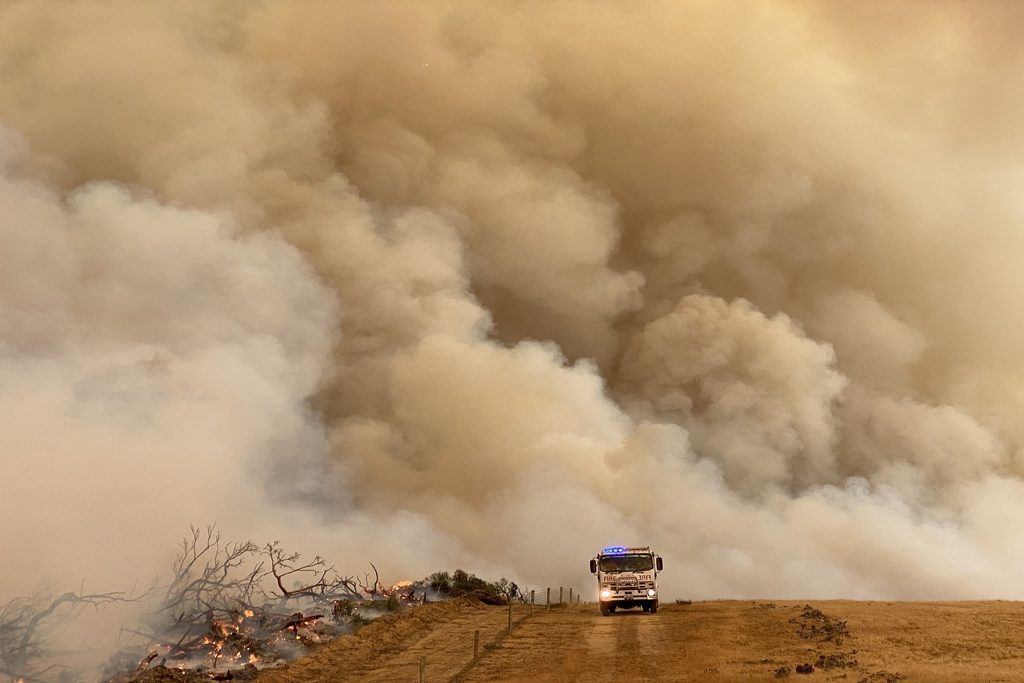 The humanitarian and ecological devastation caused by bushfire spreading across Australia is the new reality of the climate crisis. Fuelled by an extremely dry summer and soaring temperatures, these fires should be a wake up call for the rest of the world.

Over the past few weeks, international news outlets and social media have picked up on the Australian bushfire crisis, projecting images of immense devastation and destruction, despite the fires starting in September 2019. Bushfires are common phenomena in Australia, occurring every year during the hotter months, which are triggered either naturally or from human activities. These bushfires are normally well controlled by fire fighting and management services across the country.

However, as a result of temperatures as high as 48.9°C and widespread lack of rainfall, the normally controllable fires have spread at an unprecedented rate covering a huge area. Since late 2019, the fires have burned over 60,000 sq km, about the same size as Lithuania’s entire land area. Some reports have described flames reaching as high as 70 metres, which is higher than the Sydney Opera House.

An issue arising from fires of this size is that they can create their own weather systems. ‘Pyrocumulus clouds’ are produced when smoke rises and cools, mixing with water vapour to create dense clouds. In unstable conditions, these pyrocumulus clouds have the ability to induce thunderstorms, causing downbursts of winds reaching up to 170 mph (270 km/h),  ‘rain bombs’ (sudden localised torrential rain), and lightning that can start new fires in other areas, which have been reported by the Bureau of Meteorology in Victoria state.

The damage from the Australia bushfire is colossal. Collectively, these fires are reported to have emitted over half of Australia’s annual CO2 emissions, which will have knock-on effects for air quality, water pollution, public and ecological health for the country in the months to come, and for countries close by. New Zealand has already been affected, with large clouds of smoke descending nearly 2 000 km away to cities such as Auckland. Professor Chris Dickman of The University of Sydney estimates that at the time of writing, around 480 million animals have been killed by fires in New South Wales alone, one of the worst affected states, since the start of local bushfires in September 2019. This is a loss that is difficult to comprehend: taken as the quantity of loss, this is comparable to more than two times the entire human population of Brazil, or approximately one third of China’s population, dying in four months from fire, smoke inhalation, dehydration or starvation. Current reports indicate that 25 people have died in the fires, and many are still missing or unaccounted for. Thousands of homes have been destroyed across the country, and tens of thousands of people have been forced to evacuate their homes and communities under blood-red and black skies.

Despite announcing aid efforts, Prime Minister, Scott Morrison is seen as a climate change denier lacking in leadership. This has knock-on effects for Australia’s climate and environmental policies. A lack of accountability for climate change, increasing CO2 emissions in the country, and investment into fossil fuel, mean that future political actions to prevent fires like this happening again could miss the essential link about the cause of the fires.

The relationship between climate change and Australia’s rising temperatures is unmistakable. Currently, average global temperatures are at 1°C above pre-industrial levels as a result of global CO2 emissions. Globally, the past decade (2010-2019) has been the hottest decade on record, pushing local and regional temperatures to new record highs. The past few years have seen widespread fires in California (USA), Siberia (Russia), Indonesia, Brazil, and sub-Saharan Africa, yet the Australia bushfire catastrophe far exceeds the damages seen in other countries by many orders of magnitude.

By the end of the century, if all countries meet their Paris Agreement targets, average global temperatures are predicted to rise by 3°C; under a business-as-usual scenario, this rises to 5°C. These bushfires should be seen as an omen for the future- not just for Australia and those countries affected, but for the entire world.

For someone who is not directly affected by the fires, it can be difficult to comprehend the scale of destruction. Donations can be made to: