This Conservation Programme Works to Mitigate Elephant-Human Conflicts in Malaysia 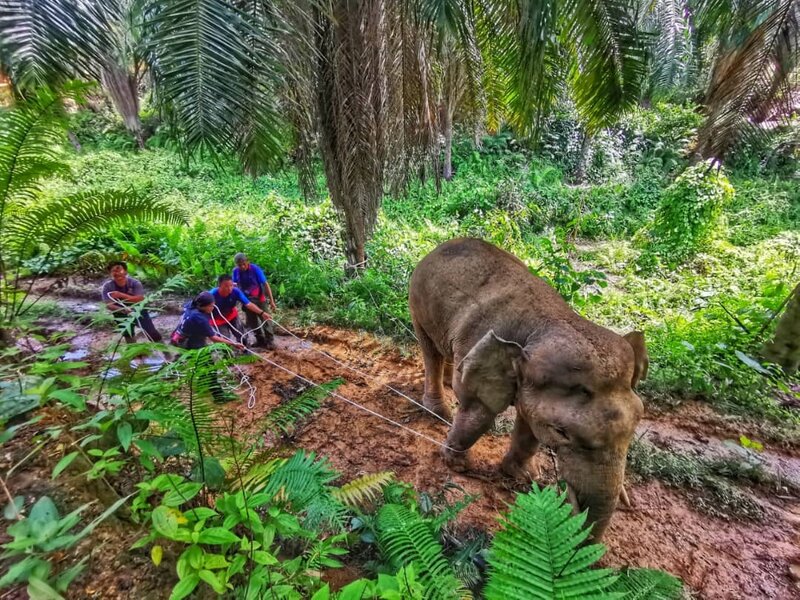 This article comes from the frontline activities of the Seratu Aatai, HUTAN and Sabah Wildlife Department, whose mission it is to conserve threatened habitats and wildlife species in Sabah, Malaysia, and to promote the sustainable management of natural ecosystems by empowering local communities and developing mutually beneficial stakeholder partnerships. Combined efforts from Seratu Aatai, HUTAN and Sabah Wildlife Department resulted in the successful satellite collaring of a young adult male elephant, called Vina, in a mission to mitigate elephant-human conflicts in Malaysia.

The satellite collar will allow the team to follow the elephant’s movements through the forests and plantations of Kinabatangan in Sabah, Malaysian Borneo. Using satellite collars is useful to know the location of the animal and try to understand the underlying reasons for their movements.

This knowledge allows conservationists to better mitigate the conflicts between people and elephants in the region. Following recent drastic land-use changes in the region, elephants spend a lot of time in mixed forest-agricultural landscapes (dominated by oil palm plantations). This situation results sometimes in conflicts, when elephants destroy people’s crops. Knowing where the animals venture is assisting our efforts to mitigate peacefully these conflicts.

Locating, tracking and tranquilizing the elephant took 1.5 days of intense field work. The procedure to attach the collar took less than 20 minutes. In a picture, Vina is seen with her new collar on top of her head. These collars do not hurt the elephant as they have tough skins. The sticks are to help the elephant steady themselves after being tranquilised, so the elephant can remain upright while the team fits the collar safely without harming the elephants. After the collar was fit, the elephant received a reversal agent and was released before he resumed his activities. The collar will emit a signal for about 1.5 year. Then the collar will automatically drop from the animal. 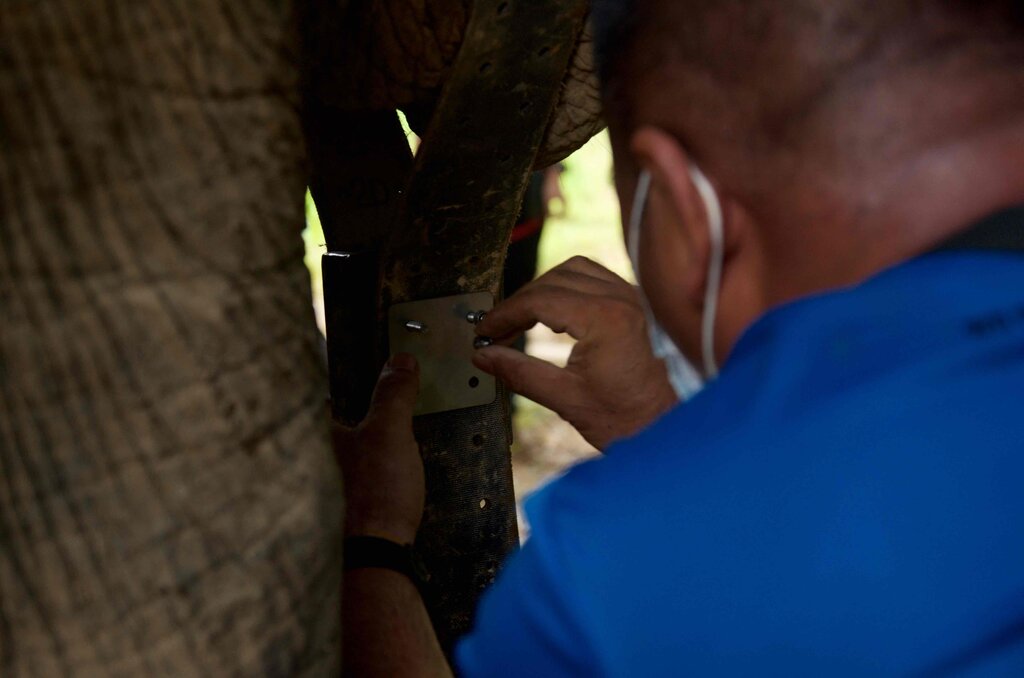 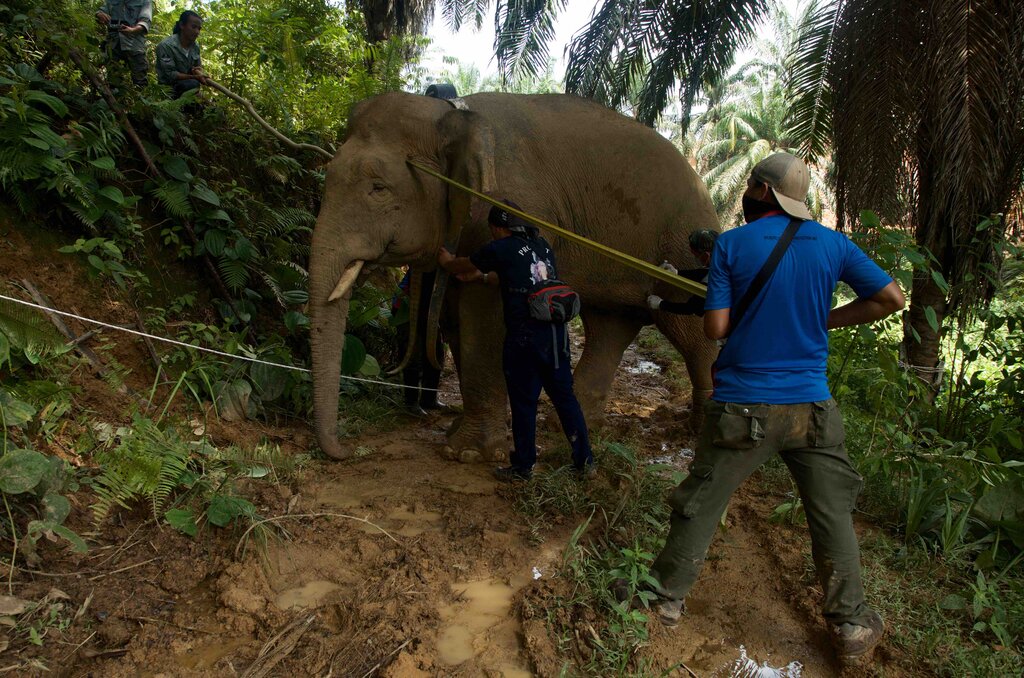 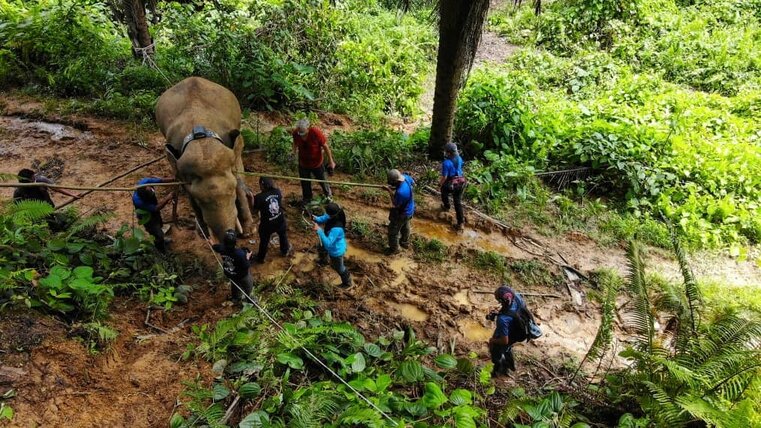 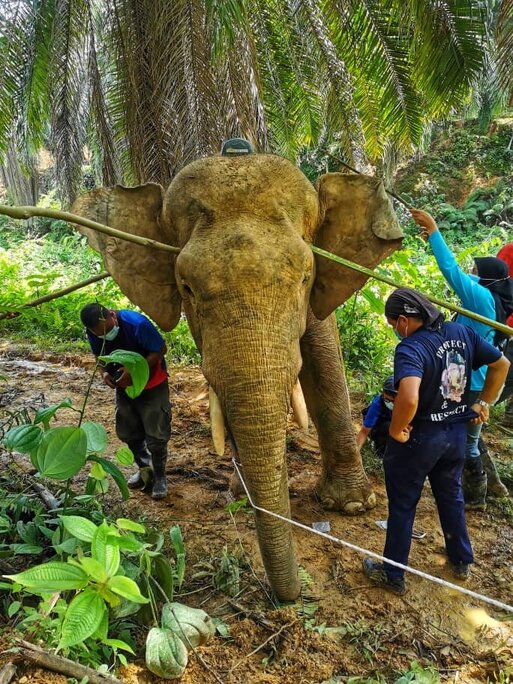 HUTAN is a community-based NGO that has been working in Kinabatangan since 1998. Seratu Aatai is an NGO working in Sabah: both NGOs try to find ways for people and wildlife in Malaysia to co-exist peacefully, avoiding elephant human conflicts, inside and outside of protected areas. The Sabah Wildlife Department is the State agency in charge of managing wildlife: they are a close partner of both Seratu Aatai and HUTAN.

HUTAN is a community-based NGO that has been working in Kinabatangan since 1998. Seratu Aatai is an NGO working in Sabah: both NGOs try to find ways for people and wildlife in Malaysia to co-exist peacefully, avoiding elephant human conflicts, inside and outside of protected areas.