What is The Coral Triangle?

What is the Coral Triangle and Why is it Important?

Whales, dolphins, porpoises, dugongs and whale sharks feed, breed and migrate in these waters. The area also supports large populations of commercially important tuna; over 120 million people live in the Triangle and rely on it for food, income and protection from storms. Tuna spawning and nursery grounds support a multi-billion dollar industry, while the tourism industry associated with the Triangle is valued at over USD$12 billion annually.

Healthy reefs act as natural barriers that soften the blow from typhoons, storm-generated waves and tsunamis. A 2018 study found that damage to coastal communities in the Triangle caused by flooding events would nearly double without and  the coral reefs. Additionally, without the reefs, Malaysia, Indonesia and the Philippines would see the costs of flooding events tripled; the reefs that encircle these countries could save, on average, more than USD$400 million each year.

To delineate the Coral Triangle, scientists and conservationists looked at high species biodiversity of coral and reef fish, and habitat diversity, as well as currents.

The Coral Triangle is generally more resilient against the climate crisis because of the complexity in the region. Research shows that the persistence of these stable conditions over the last 30 million years may have given rise to the region’s biodiversity.

Because it is less exposed than places like the Great Barrier Reef, there’s a chance the Coral Triangle could withstand some of the more dire impacts of the climate crisis.

There are many theories as to why reefs in this region are so successful, such as the fact that the Coral Triangle consists of a wide range of habitats, from volcanic islands to mangrove forests, which forced the species to adapt to the geographically complex reef system. Other reasons include the fact that the Coral Triangle sits between the Indian and Pacific oceans; marine species from both bodies of water colonise parts of the reef system where the ocean basins overlap, increasing the number of species found in the region, and another reason is that as geographic area increases, the risk of extinction decreases. If a species inhabits a large area, there’s less of a chance an organism will go extinct if something happens to a part of the reef where that organism lives. Finally, many species originate in isolated archipelagos in the Indian and Pacific oceans, such as Hawaii or the Maldives, and then are swept into the Coral Triangle by these currents. Once in the Coral Triangle, these species mix with native species, and eventually form new species. 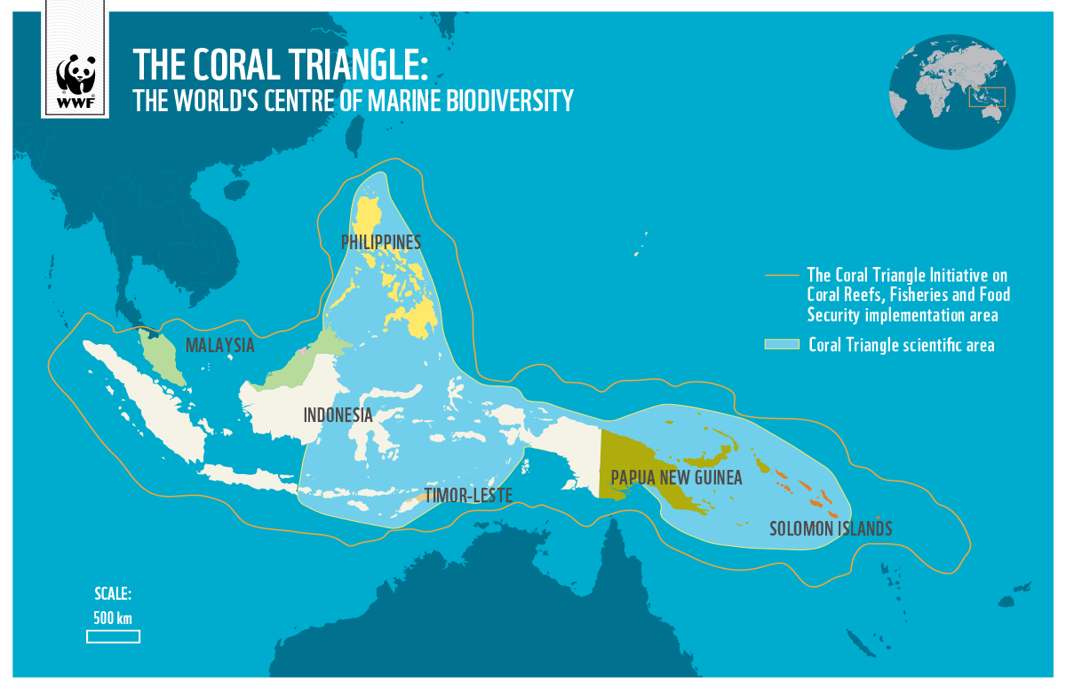 An illustration showing the countries that make up the Coral Triangle (Source: WWF).

Threats to the Coral Triangle

Overfishing and methods of harvesting fish and other resources, such as cyanide poisoning and dynamite fishing, are unsustainable at current levels and place this vitally important region at risk of breakdown, in addition to rising ocean temperatures that are threatening its coral reefs and the distribution of fish. Blasting destroys over 200 sq feet of coral reef at a time, while cyanide stuns fish without killing them, leaving them unable to move and easy to catch. Bycatching is also an issue, where non-target fish species are caught.

When large, predatory fish are sustainably caught, the reef can rebound. Often though, the area’s largest predators are pulled from the reef in high numbers, shrinking their populations and allowing destructive fish populations to weaken the coral reef ecosystem.

Coral reefs cannot survive if the water keeps warming; corals rely on algae living inside them to supply them with food. These algae, which give the corals its colours, die if the water gets too hot. The loss of this algae leaves the coral bleached.

Warming oceans also absorb more carbon dioxide. CO2 alters the ocean’s pH balance, which makes it more acidic and toxic. Shellfish and corals are particularly vulnerable to ocean acidification because it interferes with their ability to form hard skeletons.

Additionally, plastic pollution is threatening the reefs. Animals consume small pieces of plastic, and these plastics sometimes act as vectors for disease, spreading contagions like ‘white syndrome’ from sick to healthy corals.

What Can Be Done to Preserve the Coral Triangle?

In Papua New Guinea, mangrove nurseries have been started, which help to protect coastlines from impacts such as sea-level rise.

In 2009, leaders from the six nations making up the Coral Triangle launched “The Coral Triangle Initiative on Coral Reefs, Fisheries and Food Security” to sustain the region’s marine and coastal resources by addressing issues such as food security, climate change and marine biodiversity. The group recognises the detrimental impacts of the climate crisis on the Coral Triangle and they have developed an action plan specific to the area. The plan requires, among other things, putting in place effective adaptation strategies for coastal, investing in climate change vulnerability assessments and improving the resilience of coastal communities.