How COVID-19 Will Reshape the Airline Industry 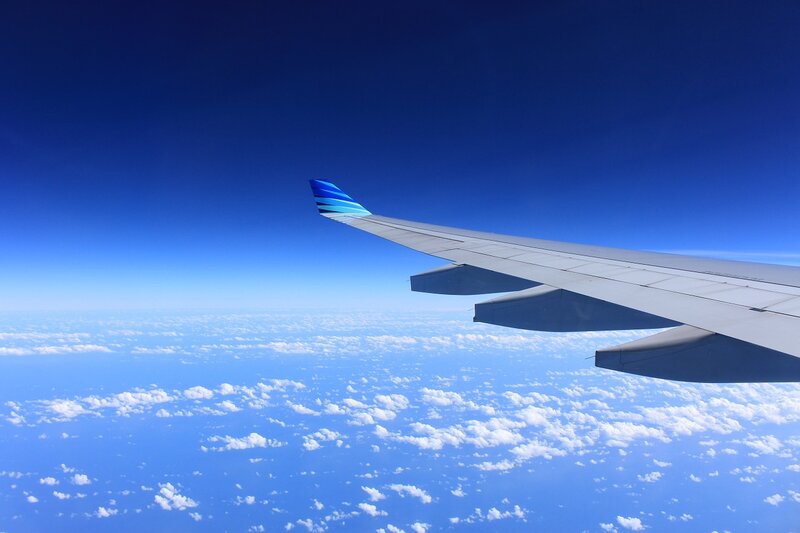 The vastness of the airline industry can easily be underestimated. According to Mckinsey & Company, aviation represents 3.4% of global GDP, contributing either directly, through the sale of airline tickets, or indirectly, through the growth of the tourism industry. Last year, 4.5bn passengers took a flight, while there were 100 000 commercial flights a day, according to the Economist. Aviation has progressed to allow coverage of greater distances, spurred by the steadily increasing market size. When COVID-19 started, unprecedented declines in consumer demand impacted the profitability of the airline industry, changing the face of aircraft travel for the foreseeable future. What will the airline industry look like post-COVID-19? 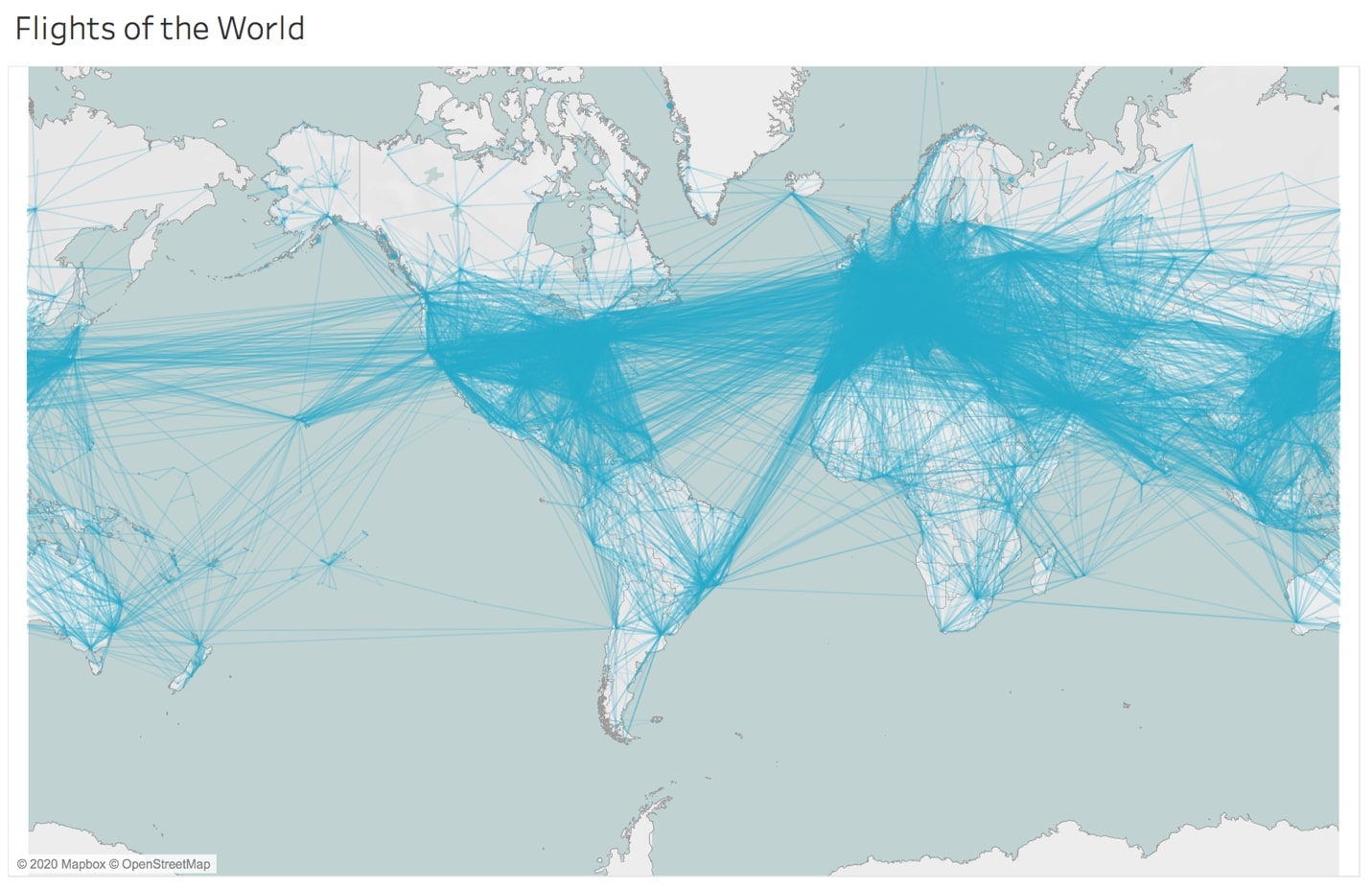 Aviation has enabled globalisation, described by author Oliver Picton as a ‘world-shrinking process’ with endless implications on tourism and shadow economies, allowing cultures to mix and businesses strategies set up to thrive purely on the certainty that foreigners will visit. As long as these conditions are held, profits are made, as seen below. 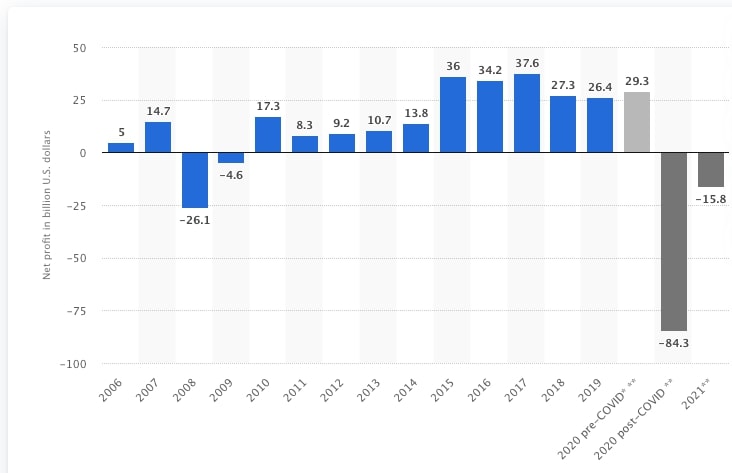 COVID-19 means that people are flying much less than usual, if at all. A once-profitable industry is now struggling to combat fears of uncertainty, border restrictions and close vicinity of passengers; it is predicted that the industry will face a USD$84 billion loss in 2020. Costs per flight varies by aircraft, but one of the most used aircraft currently, the Boeing 737-700, usually costs over $4000 per hour of the flight. This includes crew wages, airport fees, maintenance costs, fuel etc.

Lower demand has created turbulent conditions for airlines who are unwilling to fly planes with such little passengers on them, hence the flight cancellations. Travel restrictions have essentially limited the movements of 91% of the global population, according to a study by the Pew Research Center.

A Closer Look at the Industry Structure

Naturally, the airline industry is popular due to the vast amount of people employing its services, which is arguably the fastest form of transportation. However, a large part of the industry is the airport ‘experience’, such as the inflight catering, the free, and online travel shopping companies that support roughly 10 million jobs.

An understanding of the structure of the supply chain in an airport is crucial to predicting the reach of an effect like a global pandemic. Airports will contract out services (usually to the lowest bidder) such as cleaning, catering and aircraft docking facilities. Unfortunately, due to COVID-19, in order to ensure safety and sanitary standards are met, supplementary services have to be included, such as fogging disinfection teams to sweep planes before and after flights. This has increased airlines’ total costs, offsetting the decreasing costs airlines saw due to falling fuel costs. An analysis report by the International American Transport Association details the price of jet fuel, a distilled combination of naphtha, kerosene and gasoline, dropped to USD$44 per barrel as of August 21, down 42.1% from a year ago when it averaged $77 per barrel. While the fixed costs for airlines should drop due to access to cheaper fuel, contracts with airline manufacturers – the largest of which are Airbus and Boeing – continue to create turbulent conditions for many airlines.

According to Cirium Consulting, ‘approximately 64% out of the 26 000 strong’ global fleet of aircraft are now inactive. While some of these figures will be offset by easing travel restrictions, when new waves of the virus sweeps into other countries, these planes will remain grounded, requiring maintenance over time of inactivity. In order for a plane to take off at any time, the aircraft engines have to be sealed and interior reviewed, a state called ‘active parking’. Every ten days after this, covers will be taken off again to run the engine and exercise the hydraulics. The Financial Times estimates that costs can reach $30 000 per plane. However, pre-determined airline contracts with manufacturers are exacerbating the existing problem of airline profitability.

Pre-COVID-19, the economic climate of the industry was buoyed by growing consumer demand, increasing with ‘metronomic regularity since 1988’. Airlines were certain they would require more planes to satisfy consumers. Thus, contracts for orders of batches of planes were drawn up, and the future date for the planes to be paid for were set. 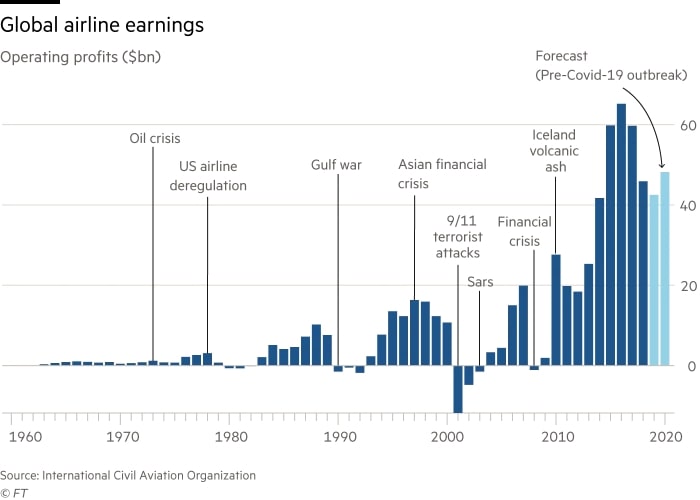 While COVID-19 has unsettled the global economy, the airline industry has taken one of the biggest blows. Speculators report that coronavirus has pushed the industry into a climate similar to that of 9/11 and the 2008 financial crash, (see Figure 4) with air transport revenue falling by 50%. Plane manufacturer contracts became realised, and airlines struggled to pay for pre-ordered planes with crumbling balance sheets. Croatia Airlines tried to cancel its order of A320s, negotiating with Airbus their contract which would deliver the planes in 2022. Having already deposited 8.5 million euros, the attempted cancellation is just one example of airlines trying to cut their losses early.

Analysts from Citigroup have already predicted excess capacity of 4 000 aircraft globally, even if traffic recovers 80% of the aircraft from last year, lending to a decline in profits for the industry. According to Oliver Wyman Consultants, the result upon the industry will be a change in organisational strategy, restructuring which aircraft to fly, and deferring future contracts if possible. Unfortunately, in many of the clauses of these contracts, it is not possible to defer payment.

In many ways, it seems that the consistent growth of the airline industry is its own worst enemy, as shown by the impact of COVID-19 on it. The certainty of growing consumer demand and then the sudden removal of it has left many airlines struggling with balance sheets, selling off planes and restructuring journeys to short-haul instead of long-haul flights. Further, companies such as Turkish Airlines have made 90% more revenue from cargo, utilising the increasing demand for international commodities. For the time being, this restructuring seems to be the way forward, with data science expected to play a huge factor in coordinating multiple flights around the world to complete a longer trip.