Can We Coexist With Elephants?

Elephants have been captured and tamed for over 4,000 years, a practice seemingly developed in Asia. The planet’s largest land animal has served as a war machine, a beast of burden and a religious symbol. Today, a third of its Asian population is enslaved to serve as a tourist attraction.

Over the course of millenia, elephants have been tamed for four main reasons: warfare, industry, religion and entertainment. Their use in combat ended with the advent of gunpowder, after which their strength forced them to play a heavy role in the urban development of roads, railways and other infrastructure. Revered by Hindus and Buddhists, elephants are still featured in ceremonies and were flaunted as a symbol of wealth. As for those in the wild, the African elephant was hunted for its ivory while all species remain threatened by human expansion as their habitats dwindle. Now, they are mostly trained to perform shows (although this is becoming less frequent), and to interact and be ridden by tourists.

They have a highly evolved neocortex similar to that of humans, great apes and dolphins. Behaviours such as grief, learning mimicry, advanced play, use of tools, compassion, cooperation, self- awareness, memory and communication have demonstrated their superior intelligence. For instance, they are able to point at things, a form of non-verbal communication. They can self-medicate to induce labour, copy other animal’s sounds, cover water holes with gum to avoid evaporation, and create art, such as paintings. Most moving is their practice of death rituals. Witnesses report herds rumbling loudly and emitting cries around deceased kin, covering the body with dirt and leaves, and even returning to visit the remains.

This makes human taming methods all the more horrifying. Captured elephants are often referred to as domesticated, but this is an incorrect use of the term. Domestication, like that of dogs, requires hundreds if not thousands of generations of selective breeding, resulting in genetic adaptation to living with humans. Just look at the difference between dogs and wolves, and you’ll understand. Elephants, however, are virtually immune to domestication due to their long gestation periods, and low birth rates. Thus, they are tamed, often through a breaking of their mind, body and spirit. The process involves heavy beatings, jabs with sticks and poles, intentional wounding and starving until the animal obeys. Nevertheless, some breeders treat the elephants with respect and unsurprisingly develop strong emotional bonds with them

Elephants populations have dropped by 50% due to poaching and shrinking habitats; the Asian species is now confined to only 15% of its original range. With around 40 to 50,000 individuals left, they are classified as endangered by the International Union for Conservation of Nature. Estimates agree that nearly one in three Asian elephants live in captivity, for a total of ~15,000. 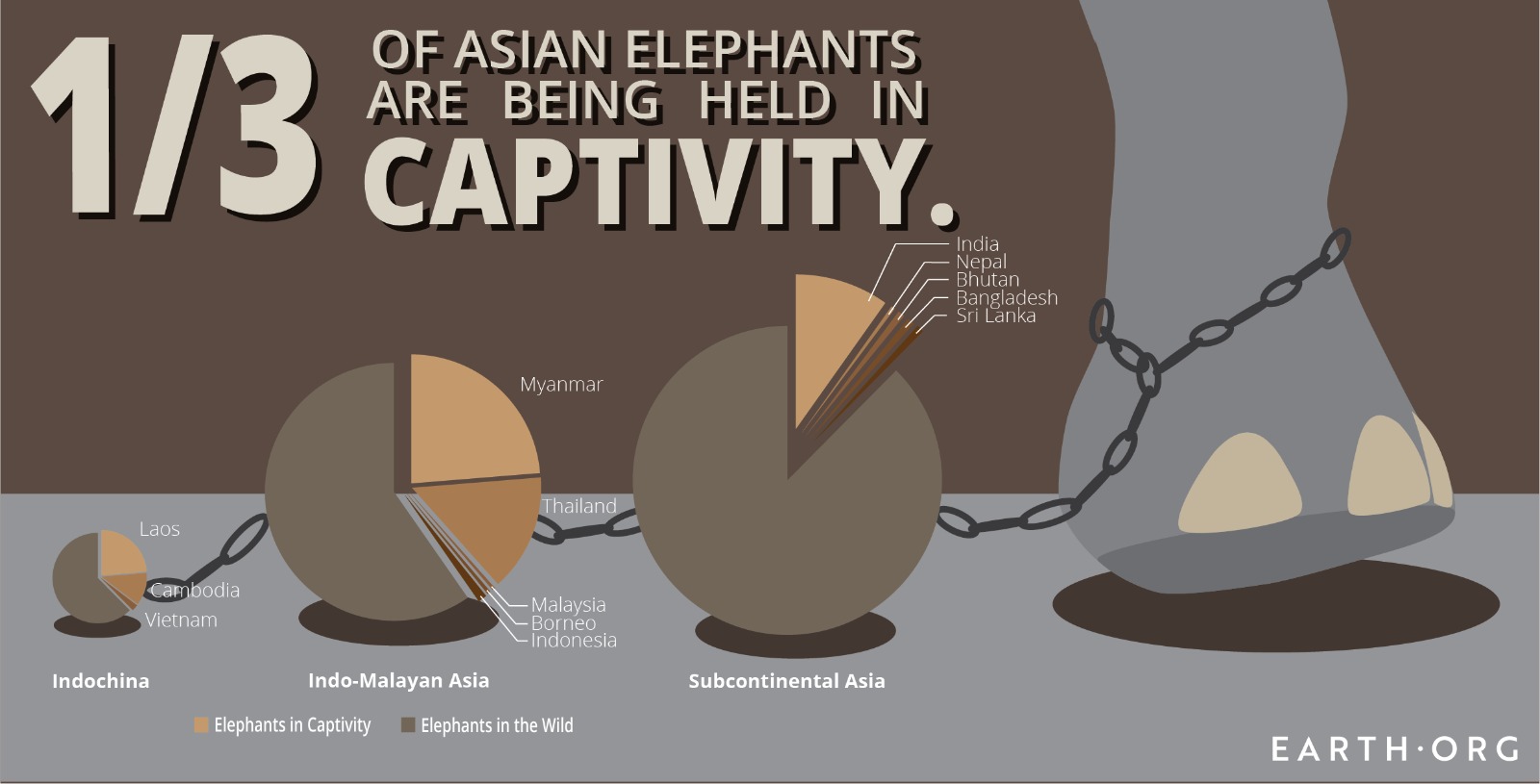 While the welfare of those in sanctuaries and zoos is a priority, this does not have anything to do with conservation of their wild counterparts. However, they do provide a stock for rewilding, which consists in reintroducing elephants into wild areas of Indonesia, South-East Asia and even Australia. In order to help elephants coexist with the ever-growing human sprawl, tech-based solutions like bulk-SMS systems warning people of elephant presence in their area have been deployed. Within two years, the system reduced incidences of property damage and human death. Combined with the afore-mentioned conservation strategies and legislation against elephant capture, we may create an environment where humans and elephants can coexist.