To date, pollution in its many forms is the largest cause of disease and the main contributor to premature deaths (~ 9 million/year). The global health burden of pollution is believed to be highly underestimated because chemical pollutants are particularly neglected in this matter, despite being one of the main contributors to environmental pollution. This is due to the lack of data in most low-income countries where chemical poisoning rates are highest. Industrial chemicals can not only trigger diseases in the exposed individual, but also pass on defects to newborns and cause developmental disruption in children.

Approximately 140,000 new chemicals and pesticides have been introduced since the 1950s. Approximately 5,000 of these have seen widespread use, while less than half were categorized as toxic, thus causing unsafe use and exposure. Only after many fell ill was their use regulated, and this reactive rather than preemptive approach still occurs today, where toxic compounds are only recognized as harmful after excessive use.

The production of toxic chemicals is on the rise, particularly in non-OECD countries. Low and middle income countries are the heaviest users of pesticides, herbicides, and fungicides which are known to contribute to brain injury in children and are responsible for various types of cancer. The burden is further amplified as companies move their chemical production into these countries for financial and regulatory advantages.

The Mechanisms Behind Chemical Poisoning

Hazardous chemicals can enter our body through ingestion with food or water, inhalation from the air or via direct skin contact and can be passed to the unborn child via the umbilical cord. The aforementioned toxic chemicals contaminate the water systems and the soil which only worsens as a consequence of industrial and urban development. Certain chemicals, such as volatile pesticides also pollute the air as components of particulate matter. Chemicals released into the environment frequently lead to unintentional poisoning and are responsible for nearly 200 thousand deaths/year worldwide mostly in rapidly industrializing countries. Thousands of tonnes of pharmaceutical waste are also released into the environment every year. Many of these products, such as antiinflammatory agents, antibiotics and cancer chemotherapy agents can be detected in urban wastewater. The high concentration of these chemicals is proved to interfere with the endocrine function of marine and freshwater species.

Despite recent advances in the characterization of chemical contaminants, as of now, only few of the chemical pollution sources are actually quantified. Lead is a well characterized pollutant which has gained wide attention during the last decades. Lead exposure, among others, can cause renal failure, stroke, hypertension and cardiovascular diseases, but most notably incites neurodevelopmental toxicity. Regardless of the strict regulations which resulted in the decrease of lead related poisoning, it still accounts for 500 thousand premature deaths and nearly 10 million lost life years worldwide with 82 % of cases being documented from developing countries. In 2017, lead exposure accounted for 1.06 million deaths and 24.4 million years of healthy life lost worldwide.

The most common form of lead exposure occurs at non-regulated lead-acid battery recycling sites where  6 – 16 million people work worldwide. Similar to lead, mercury is another well characterized neurotoxic compound. According to the WHO’s estimate, over 200 thousand people in the E.U. alone are exposed to dangerous levels of mercury. Once again, however, the worst exposure occurs in a low-income country: the small-scale, artisanal gold mines of Africa, where 14 to 19 million people poison themselves to make a living. These numbers are on the rise, with 1.3 million premature deaths per year attributed to occupational exposure. Some of these toxins include asbestos, arsenic, benzene, formaldehyde and simple diesel exhaust. 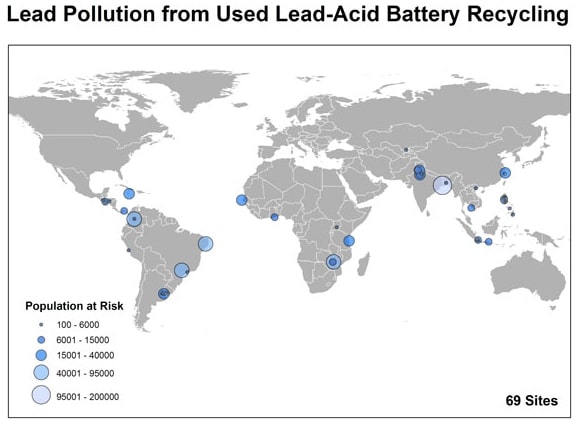 The distribution of populations exposed to non regulated lead-acid battery recycling sites. Almost all the sites are located in low and middle income countries in South America, Africa and Southeast Asia. Source: https://www.worstpolluted.org

Many developed countries have made solid progress in mapping industrial contamination, remediating hazardous waste sites (like the US toxic Superfund sites) and introducing stricter safety measures. New technologies such as satellite imaging allow us to map pollution levels and identify the main pollution sources. These new regulations and technologies can be transferred to lower income countries where action can be taken locally to improve environmental and human health.

Photo by Marcin Jozwiak on Unsplash