Freshwater is an essential resource – not just for drinking, but also for agriculture, the production of biofuels, and domestic use. Many lack access to clean freshwater sources and climate change is expected to exacerbate this problem.

Why is freshwater important?

Freshwater makes up a tiny portion of all water on earth. While nearly 70% of the planet is covered by water, only 2.5% of it is fresh. The rest is saline and ocean-based. Even then, just 1% of our freshwater is easily accessible, with much of it trapped in snowfields and glaciers. In essence, only 0.007% of the planet’s water is available to fuel and feed its 7.8 billion people.

According to the United Nations, water use has grown at more than twice the rate of population increase in the last century. As a result of use, growth, and climate change, WWF estimates that by 2025, two-thirds of the world’s population will face water shortages. The major challenge ahead is how to effectively conserve, manage, and distribute these water resources.

Runoff is the flow of excess rain, storm, or meltwater over the ground surface when it cannot be absorbed by the ground. This happens when the ground is saturated or frozen, or if the precipitation is too heavy. Runoff can become contaminated with man-made pollutants including petroleum, and pesticides, carrying them into larger water bodies like lakes, rivers, reservoirs that provide us with drinking water. Cities create impermeable ground stopping for water from seeping in and depleting aquifers, while lack of precipitation has the same overall effect. This means we are experiencing a net loss in groundwater, which is our bulwark against dried out soil. 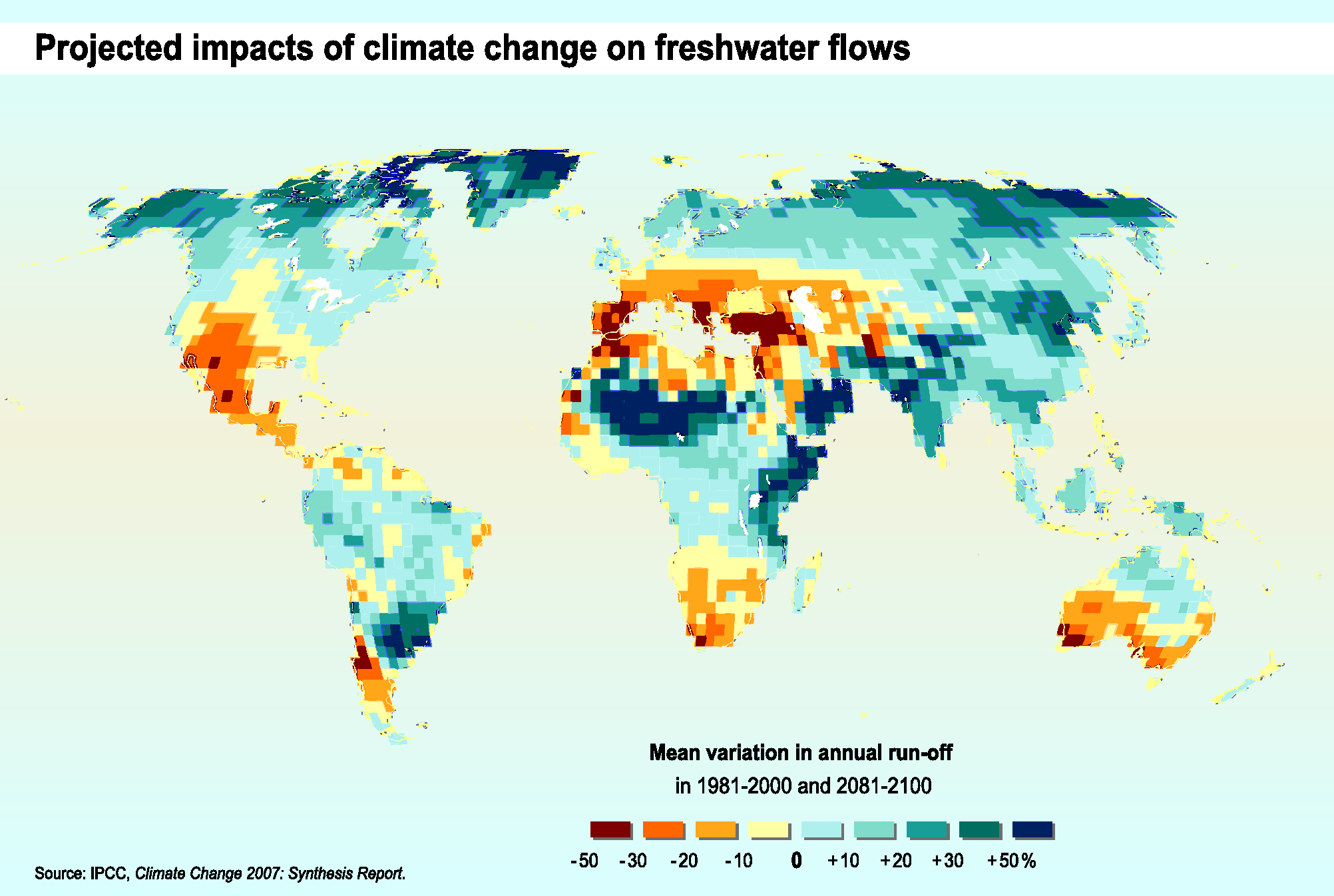 The figure above shows the predicted shift of water supplies from the tropics to the poles. The far-reaching effects of this phenomenon are poorly understood, but freshwater access will be reduced in arid places, while water quality will be reduced in populated areas with heavy runoff.

In much of the developing world, citizens are deprived of drinking water or adequate sanitation due to poverty.  For example, in Imphal, India, over half the residents spend more than a fifth of their already low income for water. Also, in Africa, 25% of the population faces chronic water stress, about 80% of illnesses are linked to poor water and sanitation conditions. Rapid and poorly legislated development has made clean water even more difficult to obtain.

Case Study – The Impact of Drought on Freshwater in Australia

Records show that a severe drought occurs in Australia, on average, once every 18 years. However, between 2002 and 2009, the south-east of Australia experienced its worst drought in 125 years. According to Andrew King, a climate scientist at the University of Melbourne, climate change is already making droughts because high temperatures create more evaporation and less water seepage into aquifers.

“In general climate change is exacerbating drought, mainly because in a warmer world we experience more evaporation from the surface, and we project for that to continue in the future,” he says.

“So when it does rain, more of that water is likely to be lost to the atmosphere through evaporation than before human-caused climate change”. 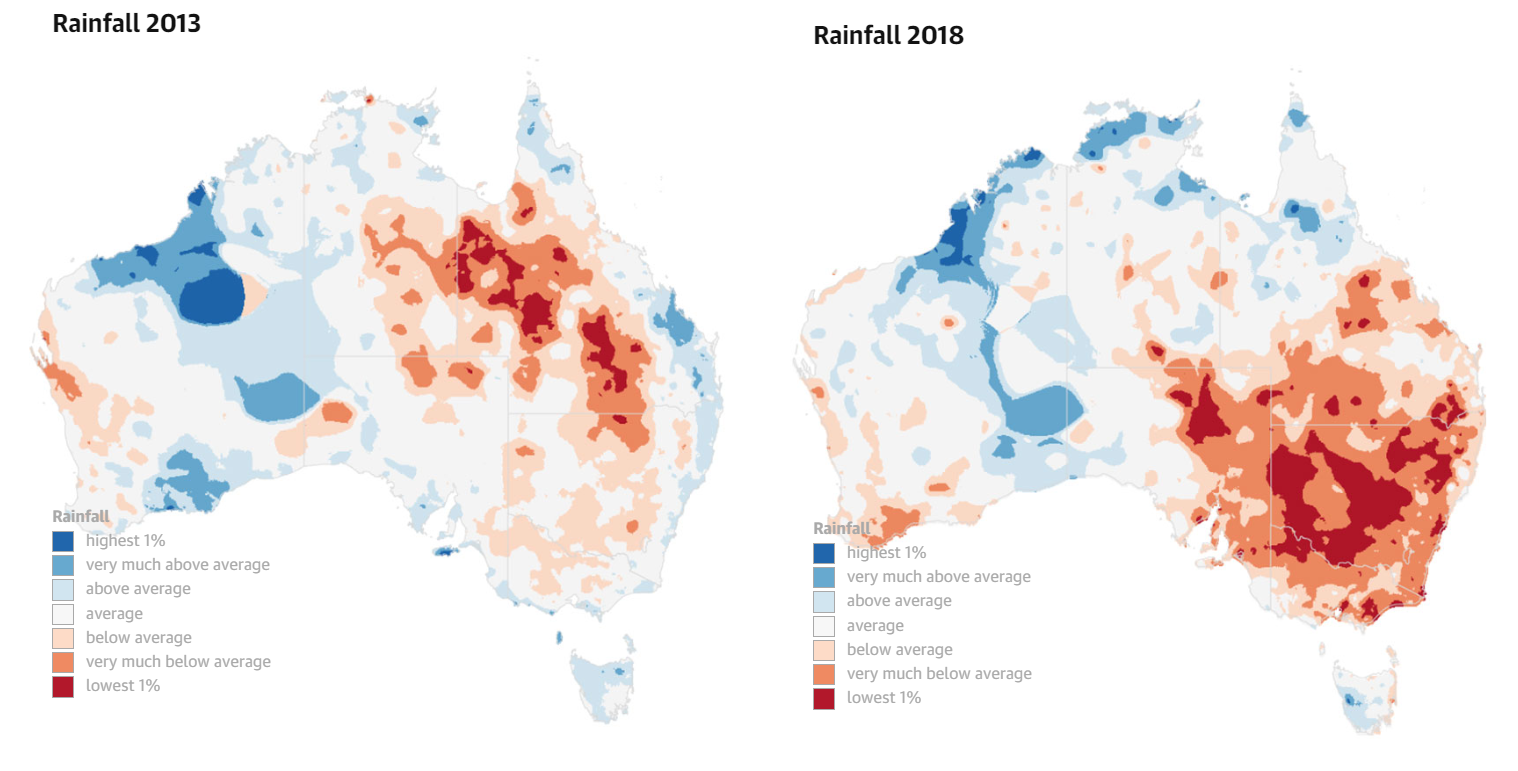 A tremendous drop in rainfall over the past decade in Australia. Source: The Guardian.

This map shows the average root zone soil moisture for 2018 compared with the long-term average for the past 105 years. The south-eastern part of the country found its soil as dry as it has ever been, putting agriculture under increasing pressure. When it finally rains again, organic material and ashes from drought-induced wildfires are washed into rivers, causing mass fish deaths and affecting water quality.

The take-away message is that the small proportion of water that is clean and accessible is more sensitive than the overall reserves of our planet. We must be careful in how we manage it, by reducing man-made runoff and limiting emissions to mitigate shifts in rainfall patterns.

This article was written by Emily Victoria Lu and Owen Mulhern.