How is Climate Change Affecting Hurricanes?

As hurricanes Laura leaves destruction in its wake in the US, scientists warn that 2020 could be the worst Atlantic hurricane season in the last 170 years, a record currently held by 2005. Currently standing at 15 named storms, this year could surpass the 31 that occurred 15 years ago. How much of this is attributable to climate change?

Hurricanes are the costliest natural disaster type, although largely because of their frequency. They originate from relatively small atmospheric disturbances over warm tropical waters, creating strong winds that create a self-reinforcing system. They gain power and speed over distance, evolving into full-blown hurricanes, cyclones, or typhoons depending on which part of the world you are in. 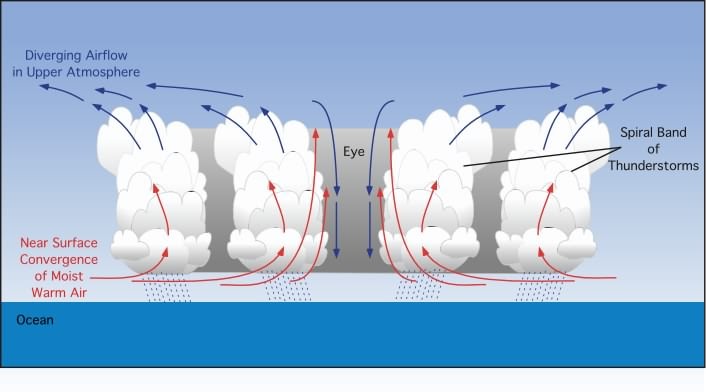 Graphical model showing a vertical cross-section of the air circulation, clouds, and precipitation associated with a hurricane. Source: PhysicalGeography.net.

This season is shaping out to be exceptionally violent, with 13 named storms, one intense hurricane and four “normal” ones two weeks before the halfway point of the season. Hurricane Laura, which hit Louisiana this week, was tied for fifth-strongest hurricane to make landfall on the continental US (according to wind speed). The Atlantic coast of Africa could also experience extreme weather, as an unexpected tropical wave has begun to build momentum as it moves toward the Lesser Antilles Islands.

Is Climate Change to Blame?

The typical scientific approach for analysing climatic trends involves looking over long time periods. Unfortunately, reliable hurricane records are only as old as the first robust satellite technologies, so around 35 years. That is far from enough to tell us whether climate change is increasing the frequency of superstorms, and the current consensus is that there is no discernible human-driven change.

Intensity, however, is a different topic. We know that higher temperatures mean more heat energy required to trigger hurricane formation. Since we are undoubtedly increasing global temperatures, it is natural to assume that we might amplify hurricane activity somehow. A 2013 study found that the share of high-intensity hurricanes is increasing at a rate of 25 to 30% per °C above pre-industrial levels. If this turns out to be a consistent trend rather than a blip (due to the short recorded time period), this could be catastrophic.

We also know that higher temperatures allow for more water accumulation in the atmosphere. Simply put, hurricanes could also be wetter, and likelier to cause floods especially when combined with sea level rise. The 152 cm of rainfall dumped by hurricane Harvey was classified as a one in 9000 year event, meaning it has a 1 in 9000 chance of occurring in any given year. Unfortunately, recent studies found that such an extreme event’s likelihood was tightly linked to climate change and could increase from 15 to 38%. Another factor that can amplify rainfall is that stagnant weather seems to be slowing hurricane movement, giving them more time to drop water on a particular location.

To summarise, the share of high-category hurricanes, with higher wind speeds and more rainfall is set to increase. 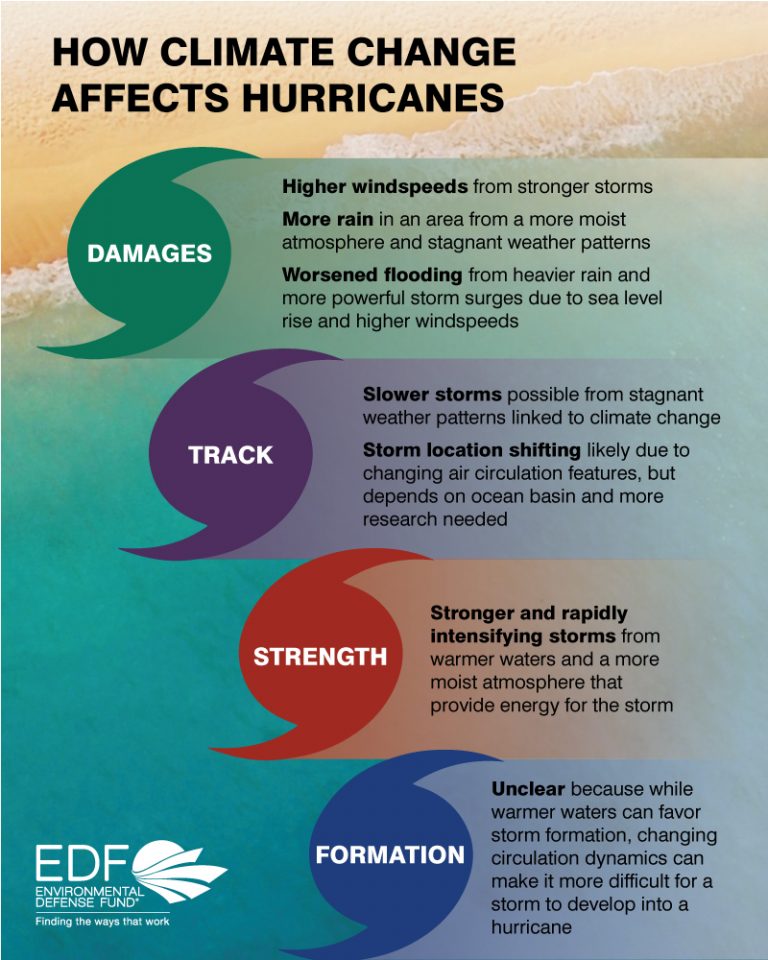 The frequency of overall tropical storms is a more controversial topic, as some studies show a future increase while others find a decrease. What is clear, is that infamously devastating hurricanes like Sandy, Harvey and Katrina will become more common, and temperature rise is at fault. The only solution is a rapid socio-economic decarbonisation, along with effective storm monitoring.