Red Tides in the UAE

A red tide usually occurs along the coast of the United Arab Emirates (UAE) twice a year due to seasonal change in water temperature. Usually a harmless natural phenomena, they are growing out of control and could cause serious damage to both humans and the environment.

The first serious red tide event happened in the UAE regional water back in early September 2008, spreading along most of the country’s coasts. Then, it appeared again in February 2009 flushing the sea with red and killing fish indirectly because of oxygen depletion. 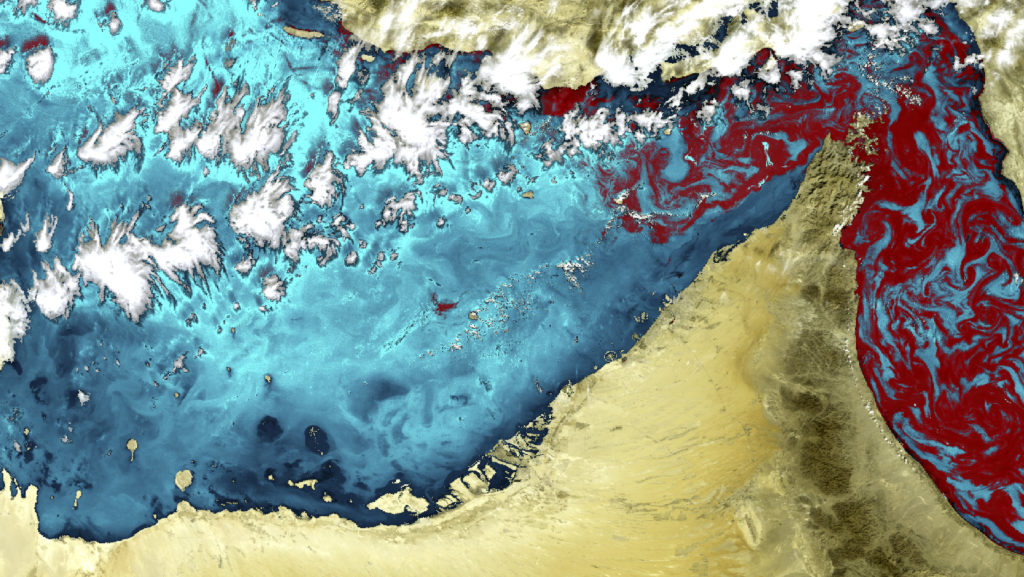 A dinoflagellate bloom, known as a “red tide” off the coast of the United Arab emirates in 2008. Acquired with Envisat’s MERIS instrument.

Red tides, a type of algae bloom, happen when a species of algae called dinoflagellates proliferate rapidly and saturate an area. These outbreaks are fuelled by increased water temperatures and excessive nutrient runoff, usually from chemical fertilizers or industrial activity. In small quantities, dinoflagellates are harmless. However, large algae blooms lead to higher concentrations of biotoxins that can kill fish, and poison humans. Shellfish are natural water filters, meaning they will stock up the poisonous compounds in their environment – if a human eats a contaminated shellfish, he/she can experience mild to severe disease.

Aside from local ecosystems, algae blooms also cause damage to the country’s economy. The coast of the United Arab Emirates hosts some of the largest desalination plants in the world. As the algae clogs filters in the plants, some of these report a 30 – 40% decrease in production. Local fishery and tourism are also affected as habitats may become unfavourable for the local marine life; water becomes unpleasant or even dangerous to swim in.

A few examples of the damage caused.

This problem doesn’t seem to be going away. In 2017, algal bloom the size of Mexico was spotted in the Arabian Sea and was spreading close to the country’s coast. But with the help of satellite technology, experts can better monitor the events and set up an early warning system. However, effort should also be put in tackling the root problems: climate change on one hand, increasing water temperatures, but more importantly chemical fertilizer use.