Staring Boston right in the eye, sea level rise taunts the city to devise countermeasures against the continuously lapping water that have increased almost a foot since 1921 and will continue to rise to 1.5 feet by 2050. Considering many factors, cost-efficient but effective measures are taken as Boston braced themselves for more war against the sea.

Earth.Org has mapped the potential look of the floods Boston might have to fend off more often by 2100 with current sea level rise projections.

Situated right by the shore, Boston is ranked as the 8th most vulnerable coastal city to flooding according to the Organization for Economic Cooperation and Development (OECD). Even without the occurrence of a storm, high tide on a usual day is enough to drench parts of the city. Thermal expansion of seawater and ice sheet melt are the driving factors behind sea level rise.  It has increased tidal flood frequency by nine events per year (compared to the 1970s), and could go up to 70 more per year by 2045. Aware of the danger this represents, the city has declared a city-wide redesigning of its shorefronts to minimize flood impact on day to day life.

Large areas of the city will still be flood-prone, especially when considering the possibility of a 1-in-100 year storm surge (whose intensity has a 1% chance of occurring in any given year) on top of sea level rise. The question is then whether it is worth investing in costly adaptation or simply relocating communities. “You either protect people or you get them out of the way,” Michael Oppenheimer from Princeton University’s geosciences and international affairs said. “There just isn’t a choice”. The socio-economic disparity between some of the vulnerable areas will have to be carefully considered by officials when making this decision.

Adaptation is already underway: the main street in Charleston is raised by about two feet, watertight steel doors were erected at the rail tunnel entrance near Fenway Park and a 10 feet high flood protection berm is installed to serve as a reservoir beneath Joe Moakley Park, also boasting its height.

The cumulative damage and adaptation cost between the period of 2000 to 2100 for coastal flooding range from approximately US$6 billion to US$94 billion. Countries still hesitant to invest in mitigation measures would do well to follow Boston’s example.

As a call for awareness, Earth.Org has mapped what extreme flooding would look like in Boston by 2100 if no action were taken. 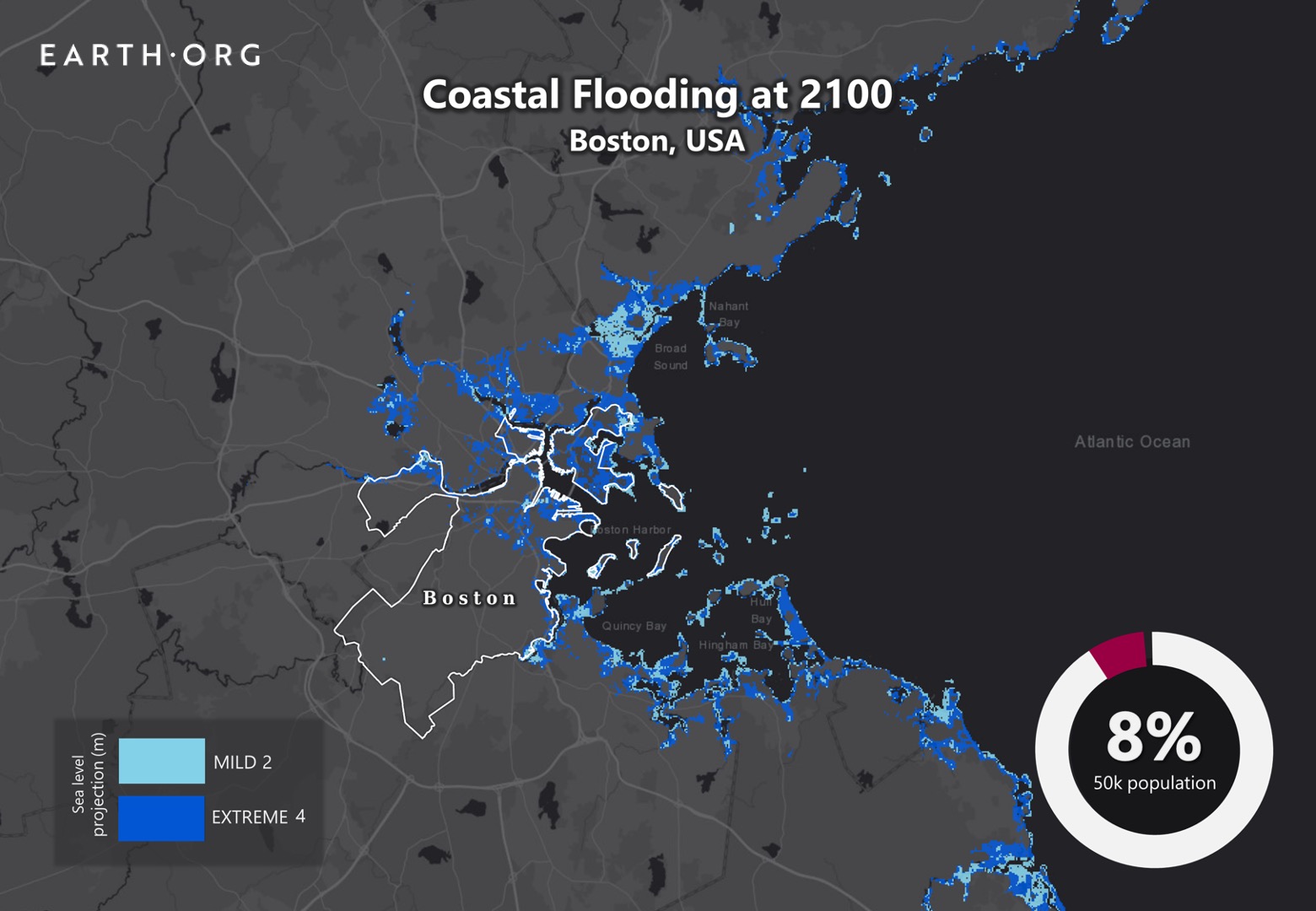