Shifting Baselines and the Elusiveness of Climate Change

The global climate has been warming for several decades, yet we have been slow to react. This is largely due to the fact that individuals rarely witness changes in weather patterns, or the broader consequences of our actions as a species for themselves. This phenomenon was dubbed the shifting baselines syndrome, and is an important factor in our inability to deal with climate change.

One of the main issues with raising awareness about climate change is that few notice its effect year by year. This is to be expected, as climatological changes occur over time periods that are meant to dwarf the human lifespan, on top of which, we’ve been in an unusually stable and benign climate for the past 12,000 years. Nonetheless, scientific evidence puts climate change certainty above 95% (according to the last IPCC report), so why can’t we put a finger on it?

It is likely due to a phenomenon called the “shifting baselines syndrome”. The term was coined by Daniel Pauly in 1995, when describing the declining size of fish and total catch that had somehow gone unnoticed for generations. Fishermen, when asked, would claim that fish yields had “always been so”, despite records pointing to the contrary, demonstrating a sort of “environmental generational amnesia”. The very gradual changes in our environment combined with each person accepting the world they are born into as the norm results in a lack of shock at historical changes beyond their lifetimes.

In order to demonstrate this effect, we gathered data from the German weather service to look at the evolution of a few simple types of climate-driven patterns since 1946, i.e. hot days per year. We defined hot days as those with a maximum temperature of 30.0 °C or more, which on average used to occur around 4 times a year in Germany back in the 1950s. 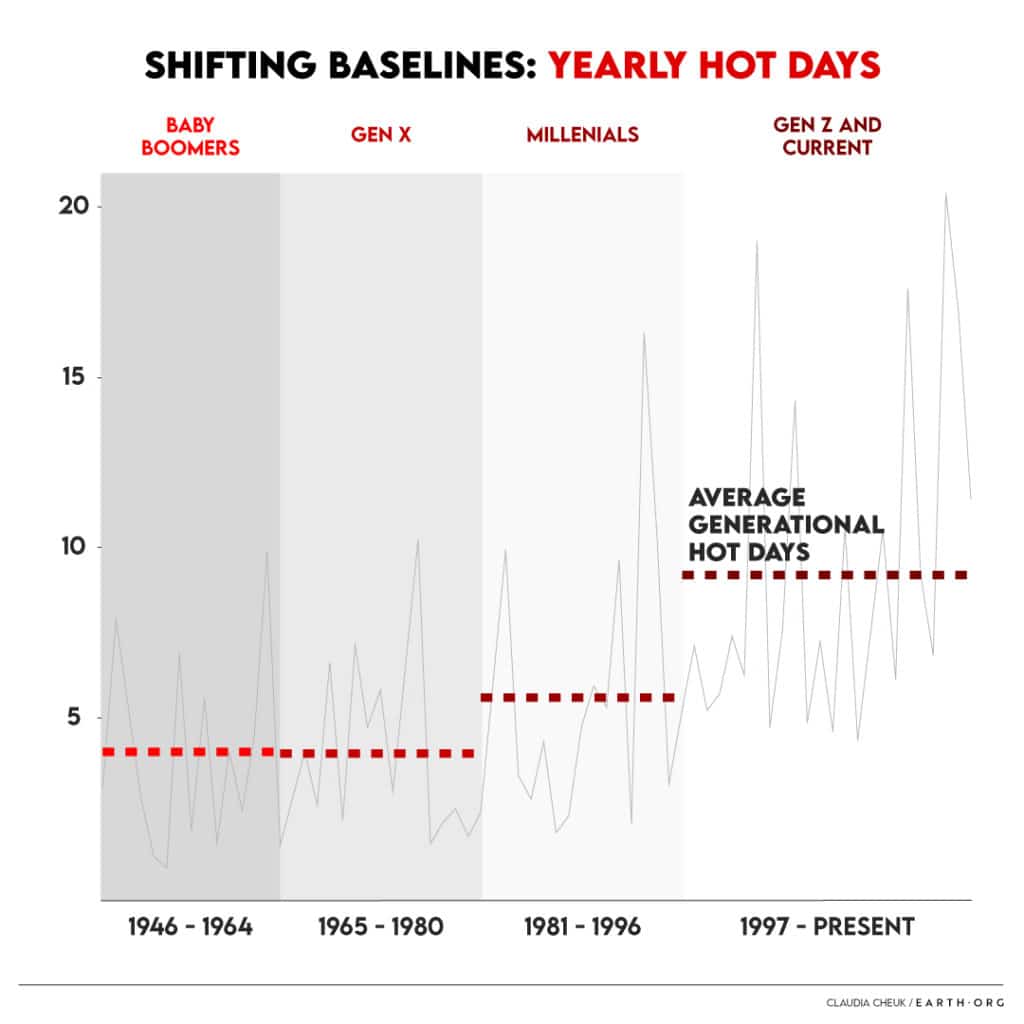 Using broadly recognized generational labels, we can see how the average perceived number of hot days per year changes for each consecutive group. Baby boomers, born between 1946 and 1964 start with 4 days a year, and this actually stays put for the Gen X time period. Millennials, however, experience a new norm in the form of 6 a year, while Gen Z has only ever known a world in which the yearly average is 9.

Before going any further we must warn that these results paint a stark picture, but that such a short period in time looking at a single metric could simply be an exceptional anomaly. We do not claim to be demonstrating the effect of climate change through our analysis, but rather illustrating a subset of what has been robustly demonstrated by the world’s leading researchers.

Now, let’s take a look at “frost days” in Germany over the same time period. These are defined as days (or nights) where the minimum air temperature drops below 0.0°C. 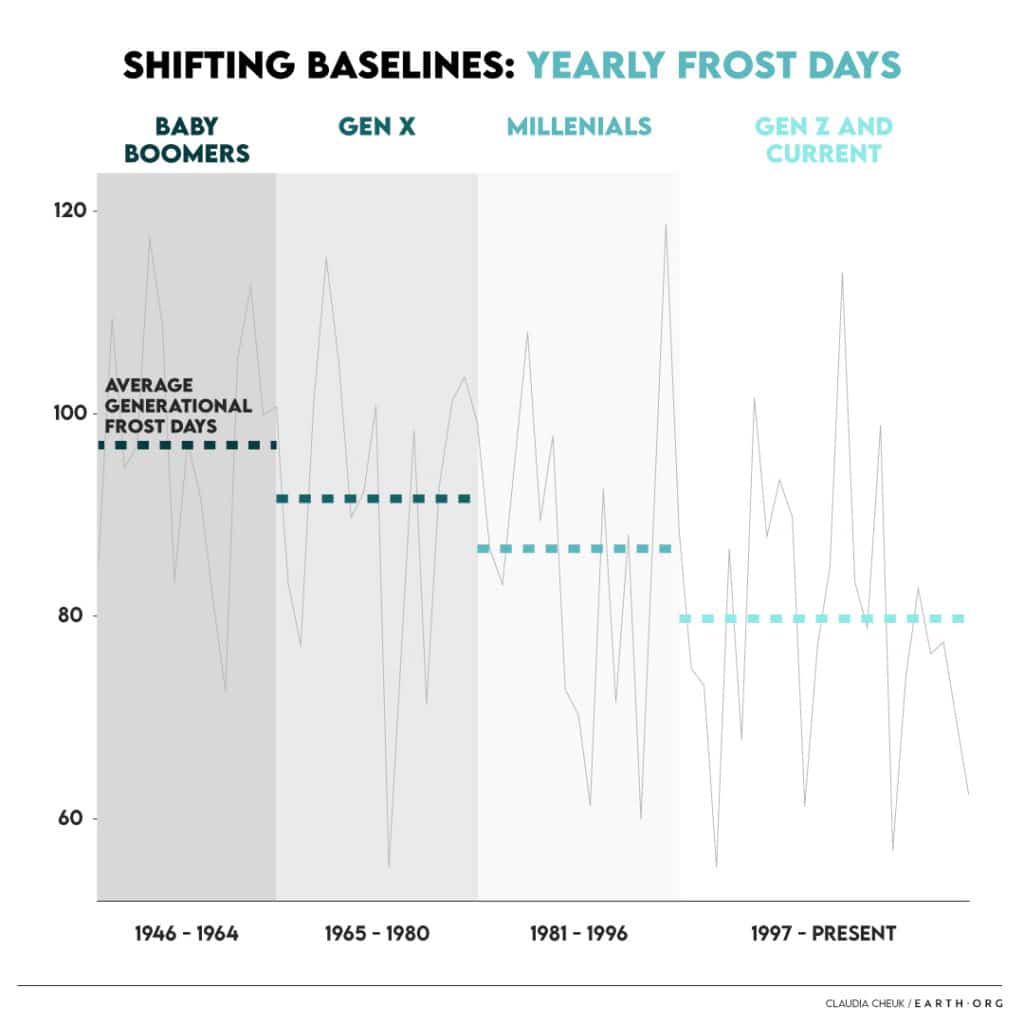 An even sharper generational contrast appears, with a fairly regular stepwise drop of about 4 frost days between each group’s average early-life experience. Over the course of nearly 60 years, both long in human terms and incredibly short in climatological terms, a 16 day change occurred, significant from both perspectives.

Of course, our lack of pattern-recognition is in large part due to the high year on year variability, which you can see in the graphs that underlie the averages.

Key to the fight against climate change is the level of global awareness. Let’s assume that once awareness (and an equally assumed level of care for the issue) needs to reach a certain level before we effectively decide to solve the problem. If an individual notices a degree of change for the worse throughout their lifetime, they will become more aware, thus increasing global awareness level, both through their own opinion and that of the people they influence around them. Then comes along the next generation, which automatically assumes its birth conditions are the norm, thus erasing some of the progress made, generation on generation.

The Gridlock is Breaking

Unfortunately for us, climate change has significantly worsened and accelerated over the past two decades. As a result, the scientific community went from quite certain to very sure that it is real, quelling most (if not all) climate denialist discourse. Authorities have since begun recognizing and planning for it, while media coverage has increased, helping sway public opinion. We are therefore breaking through the shifting baseline syndrome’s paralysis effect as a result of climate change’s growing momentum.

One could argue that the damage is already done. It is part of what got us here, along with financial incentives conflicting with the greater good and, if we go far back enough in time, a simple lack of knowledge. Now the power of the internet, data, visualization and engaged reporting helps overcome temporal and spatial barriers to knowledge. The battle remains far from won however, and if you have read this far, please do your part in spreading the knowledge to your close ones. It all adds up, even if the result unfolds beyond our range of perception.

This article was written by Owen Mulhern. Data Analysis by Daniel Müller-Komorowska.