Agricultural expansion has exploded in the past two centuries to accommodate a rapidly growing population. We have turned to unsustainable methods to increase production, while transforming the natural world into poorly maintained mono-crop fields. If we are to ensure food security for future generations, we must change our current practices, and fast.

Our civilization’s backbone is agriculture. It has shaped the development, persistence and decline of many kingdoms and empires through history. Essential to our existence, the practice itself relies on water and soil to produce the crops and rear the animals that feed 8 billion people today. Unfortunately, with population levels unlike anything our planet has ever seen, the amount of land we requisition from nature is pushing the planet’s resources to the brink.

We cannot continue expanding our farmland to the expense of natural habitats, as they are home to the rich, yet finite ecosystems that make our planet fertile to begin with. Preserving the little wilderness we have left is crucial, for if it collapses, we will soon follow.

As we can see below, while our population keeps soaring, agricultural expansion is slowing down. 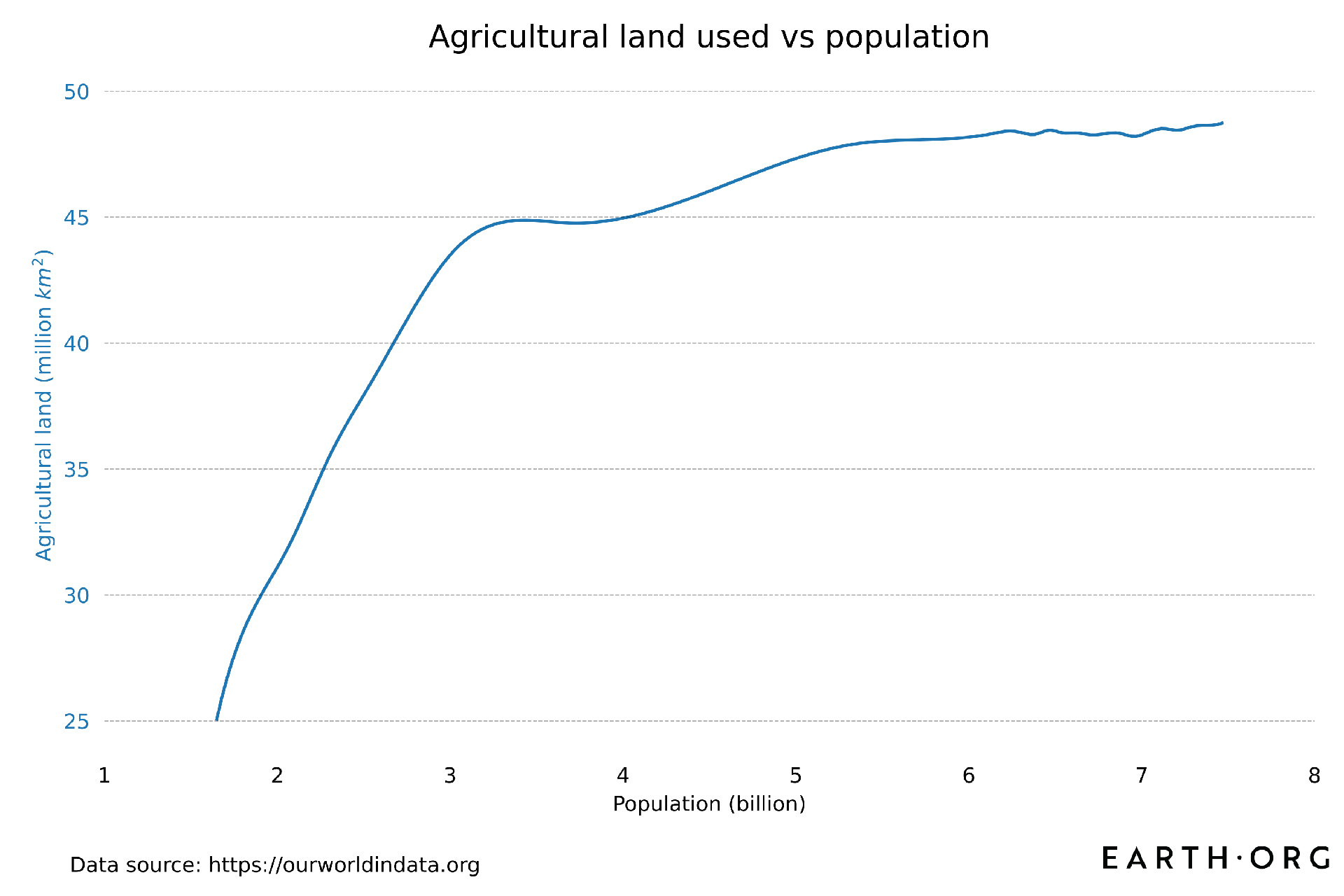 Unfortunately, this does not reflect a newfound awareness of the importance of conservation. It is rather the manifestation of our ability to pump more out of the land we are using thanks to fertilizers and pesticides. 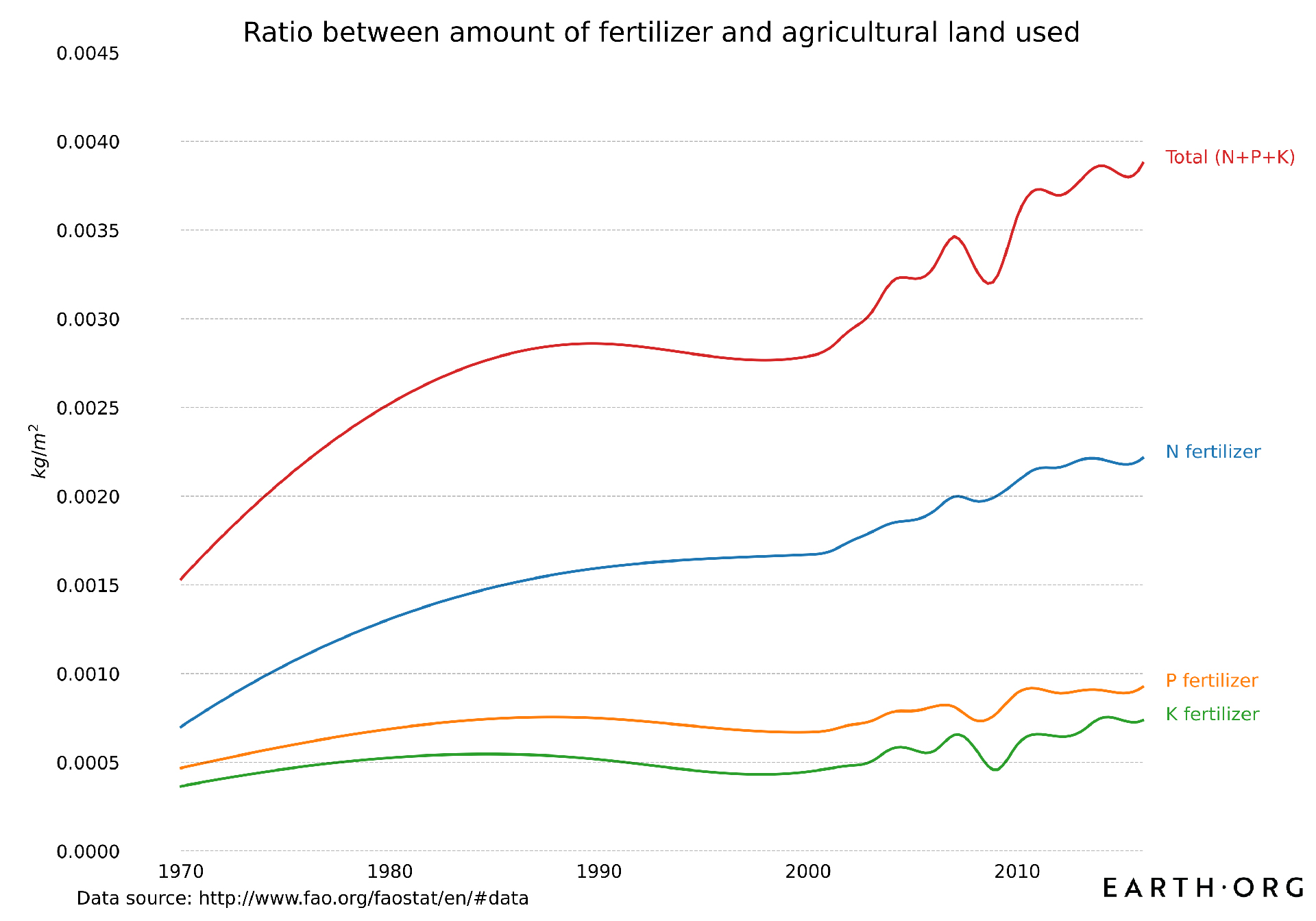 Amount of fertilizer used per unit of area over time. We are using more fertilizer as time goes bye, especially combinations of potassium, nitrogen and phosphate. Plot by Luca Brianza.

These have driven up yields by a huge amount over the last 50 years, but it is taking more and more input to obtain the same output as shown below. 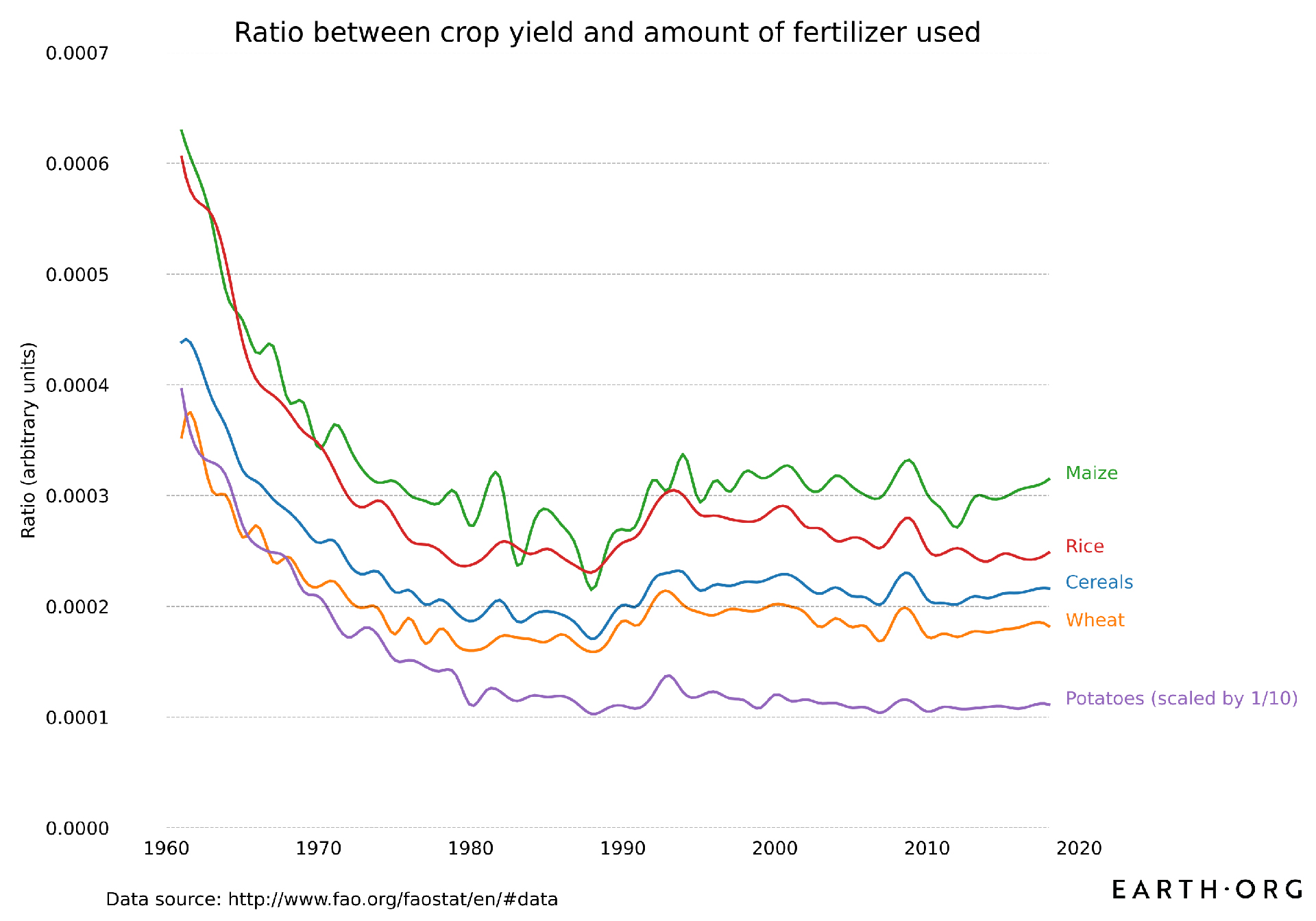 Ratio of yield to fertilizer use. We need to use more fertilizer every year to maintain the same production levels. Plot by Luca Brianza.

Could we simply stop using fertilizers and pesticides and go back to more traditional and sustainable methods? That isn’t obvious. Typically, rich topsoil derives from bacteria and fungi-dependent processes, ensuring a nutrient-packed composition. These fertile soil layers take a very long time to form, estimated between 0.025 to 0.125 mm per year (Montgomery, 2007).

Once a plot of land is harvested for a single type of crop, we need to let cover crops grow and animals graze, allowing natural replenishment of its resources through biomass decomposition. Instead, we often leave soil bare, leading to excessive water- or wind-driven dispersion of the nutrients. These eventually reach the ocean where surplus nutrients create algal blooms, depleting the surroundings of oxygen and creating so-called “dead zones”. On top of all this, fertilizers have been shown to increase soil acidity and disrupt microbial processes, leading to more CO2 emission than sequestration.

The situation is unsustainable, even illogical. In an interview with Yale’s E360, researcher Rick Haney explains that the onus on higher yields is leading to such price drops that many farmers report losses despite high production. We are flooding the markets and killing our soils in the name of growth for the sake of growth. In other words, overproduction is threatening our future food security.

There are many solutions that astonishingly aren’t being implemented, possibly due to the dominance of biased research by corporations who profit from current practices. Since the advent of fertilizers, many traditional techniques stemming from thousands of years of practice have been thrown out the window.

It may be beyond our means as individuals to change agricultural practices effectively, but we can still make a difference. How can we optimize our use of farmland to both feed 8 billion mouths and allow our planet to recover? You may be tired of hearing this one, but let me demonstrate why you should be eating less meat. 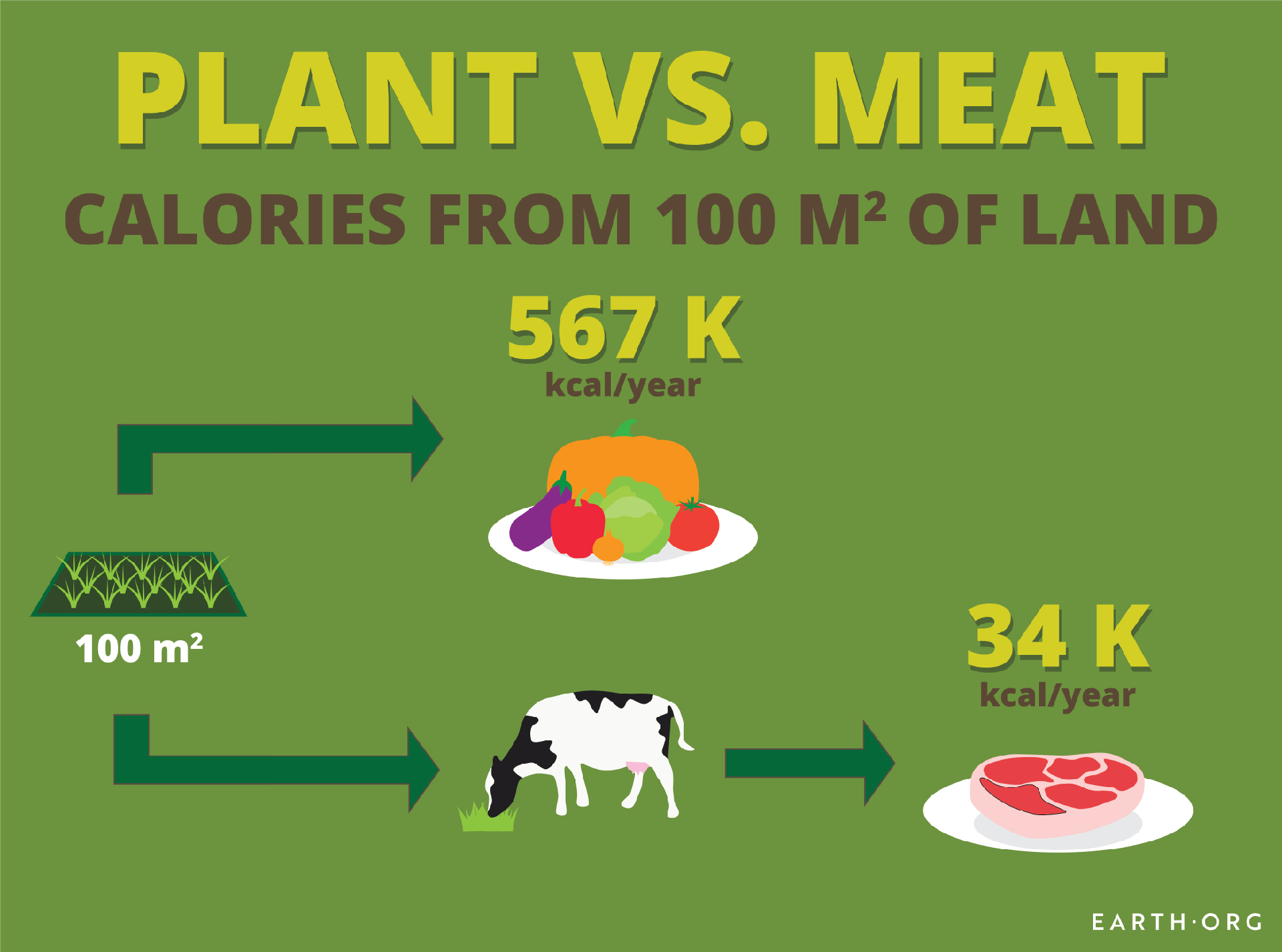 Calories obtained via vegetables, or through meat from a 100m2 plot of land. Graphic by Sean Baerfuss.

Plants outdo meat by an incredible margin when it comes to the amount of calories you can produce with a plot of land. We could essentially let nature reclaim vast territories and rebound from the dwindling state we put it in, while maintaining food security for all.

This article was written by Owen Mulhern. Data analysis and plots by Luca Brianza. Graphic by Sean Baerfuss.