Too Hot to Live In: Climate Change in Pakistan

Nineteen of the twenty hottest years on record have occurred since 2001, not including 2020 which is on track to top the list. Now, research has found that climate change could make parts of Pakistan too hot to live in by 2070.

Pakistan has an arid climate with hot summers and little rainfall, and a wide amplitude of temperatures depending on your location. The coastal area in the south is usually warmer whereas its northern reaches stretch to the snow-covered peaks of the Karakoram range.

The country has been going through wave after wave of extreme heat in the past few years, beginning with a series of spikes above 50°C in 2010. Another severe heatwave struck in 2015, peaking at 49°C in Larkana, Sindh province, topped by 50.2°C  in Nawabshah, Sindh again, in 2018.

While these temperatures aren’t exactly surprising the Pakistani population, they are nonetheless crippling. The city of Jacobabad in Sindh is said to be the hottest in the country, in Asia, and maybe in the world. Its citizens describe a discernible increase in maximum temperatures that is largely attributed to climate change. Temperatures above 50°C  are taken in stride, but the reality is that babies have been known to die when air conditioning malfunctions.

Unfortunately, a study published earlier this year (Xu et al. 2020) predicts that Pakistan’s average yearly temperature could become as hot as that of the Sahara by 2070 if we do not rapidly decarbonize. 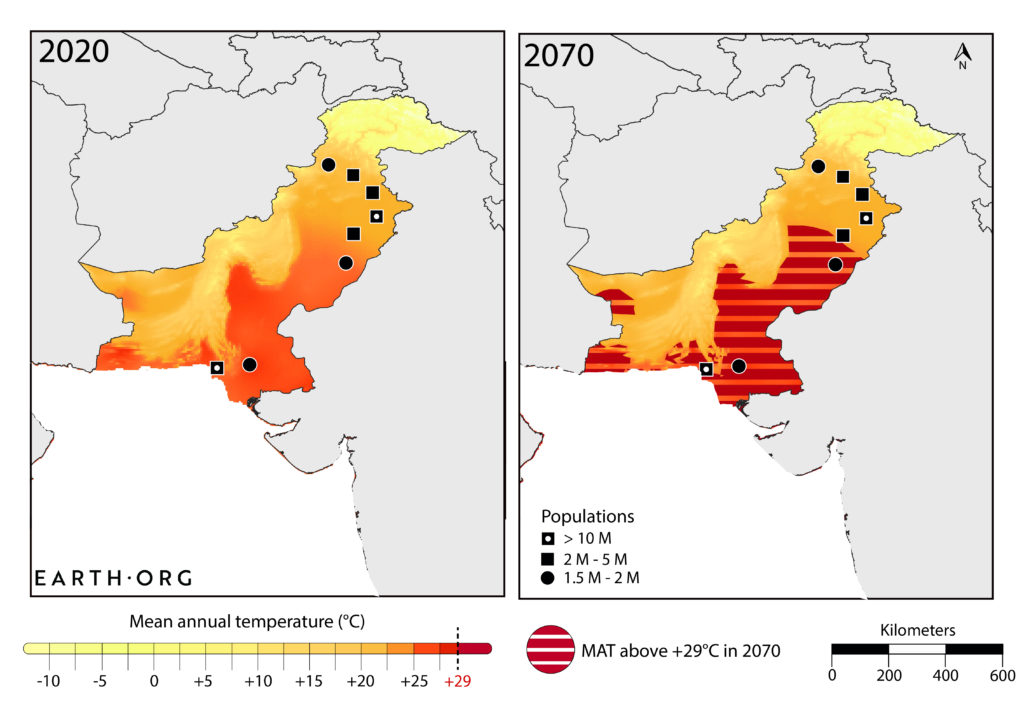 Despite the number of agglomerations that remain outside the “danger zone”, a concerning proportion of the population finds itself inside it. Even more worrying is the amount of people living in rural areas or underdeveloped urban zones with little access to heat mitigation.

By 2070, it is likely that a larger percentage of the population will live in cities, but it will still be a tall task to accommodate 262 million people in a country that is too hot to live in.