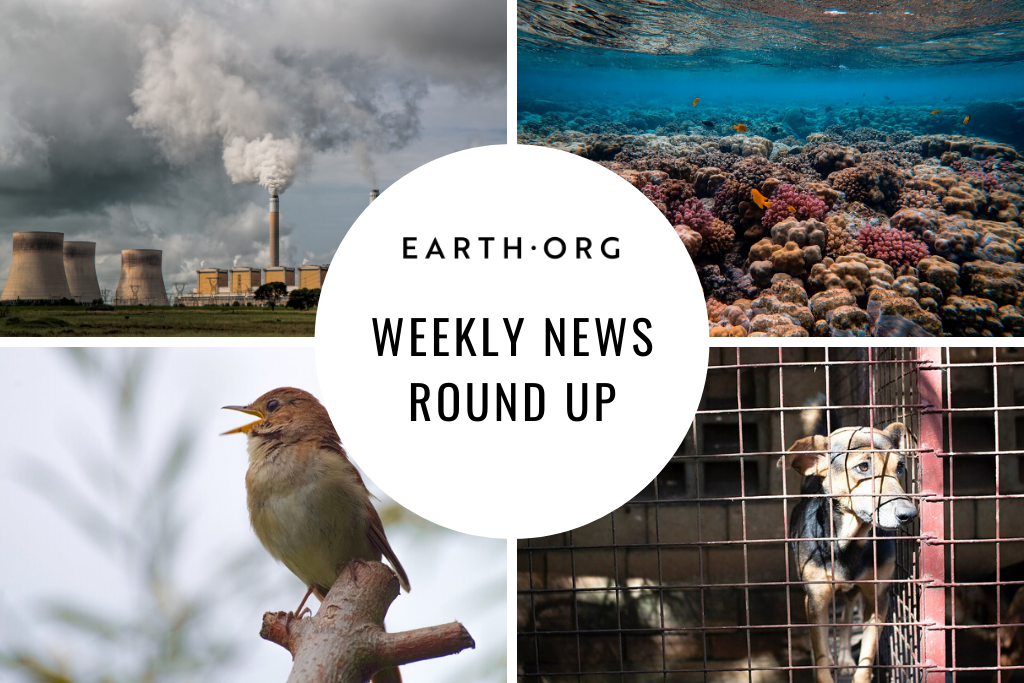 Read the latest environmental news that made the headlines around the world this week on Earth.Org’s Weekly News Roundup.

Combined, they emitted about 790 000 tonnes of carbon dioxide more than they would have had they stayed within their limit set before the start of the year. Companies in breach of these limits without good reason must either buy carbon credits or pay a penalty to offset those emissions, but they went unpenalised.

Warnings similar to those found on cigarette packets should appear on high-carbon products, from airline tickets and energy bills to petrol pumps, a group of public health experts writing for the British Medical Journal believe.

The experts say that the labels would be a cheap but highly effective intervention that would make consumers aware of the impact of their purchases on climate breakdown. High- carbon health labels could show pictures of damaged lungs from air pollution, or highlight severe weather such as flooding and heatwaves. Warnings in other countries could include the increased spread of dengue fever and malaria driven by global heating.

The Great Barrier Reef Marine Park Authority has confirmed the natural landmark has suffered a third mass coral bleaching episode in five years, attributing it to the accumulation of heat, particularly through February. The severity of the damage varied, but some areas that had been spared during mass bleaching events in 2016 and 2017 had now experienced moderate or severe bleaching. About half of the reef’s shallow water corals bleached and died in 2016 and 2017.

It noted that reefs in the northern and central parts, including near Cairns and Port Douglas, experienced moderate bleaching, and most corals there should recover. Some pockets of the reef remain unaffected by bleaching.

Nightingales at Risk Due to Shorter Wings Caused by Climate Crisis

Spanish researchers examining wing sizes of two nightingale populations in central Spain have found that the average wing length relative to their body size has fallen over the past two decades. The study says that natural selection driven by climate change is causing the birds to evolve shorter wings.

In recent decades, the timing of spring has shifted in central Spain and summer droughts have become longer and more intense, leaving the nightingales a shorter window in which to raise their young.

The UN biodiversity chief has called for a global ban on wildlife markets- such as the one in Wuhan, believed to be ground zero of the COVID-19 outbreak- to prevent future pandemics.

Mrema said there were clear links between the destruction of nature and the emergence of human diseases, but cautioned against unintended consequences by depriving low-income communities who depend on wildlife of their livelihoods and said that alternatives are needed for these communities.

For more analysis on the loopholes of the ban that can be exploited, see Earth.Org’s article.