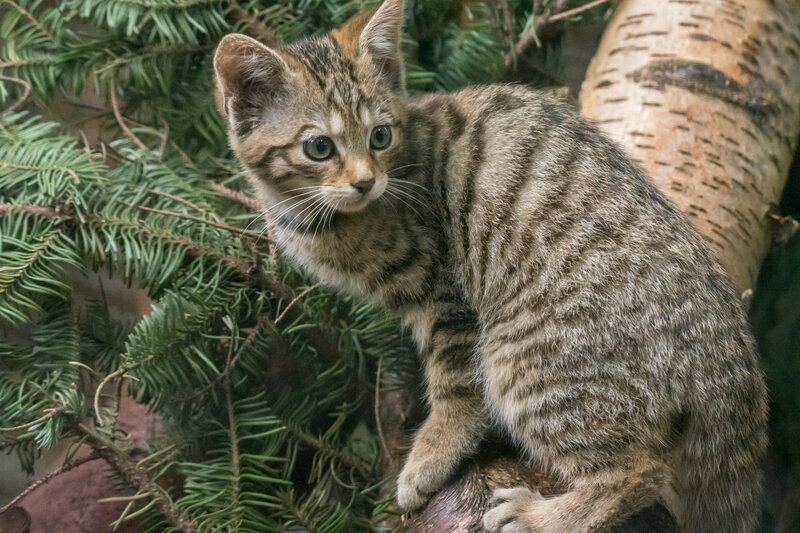 The Royal Zoological Society of Scotland (RZSS) has announced that four critically endangered wildcat kittens have been born at the Highland Wildlife Park in Scotland.

Guests will now be able to see the kittens, named Strom, Eilein, Druim and Vaara, after the wildlife conservation charity recently reopened wildcat viewing areas at the park.

Wildcats are one of Scotland’s most threatened mammals and the RZSS is leading a new partnership project, Saving Wildcats, which aims to secure the animals’ future by breeding and releasing wildcats into the wild.

David Barclay, ex-situ conservation manager of Saving Wildcats, says, “Following a sad history of habitat loss, persecution and, more recently, breeding with domestic cats, wildcats are on the brink of extinction in Scotland but it’s not too late. By bringing together the expertise and skills of national and international organisations, the Saving Wildcats project can secure a future for the Highland tiger by breeding and releasing wildcats into the wild, so every birth is a potential lifeline for the species.”

Saving Wildcats is being led by RZSS in collaboration with NatureScot, Forestry and Land Scotland, the Cairngorms National Park Authority, Norden’s Ark and Junta de Andalucía. Learn more about the Saving Wildcats (SWAforLIFE) project at savingwildcats.org.uk/.

The park has asked visitors to wear face coverings at the outdoor enclosure to help protect the cats and others. Cats can catch flu from humans and some have caught the COVID-19 virus. In April, a female Malayan tiger at the Bronx Zoo in New York City tested positive for the infection, potentially after coming into contact with an asymptomatic zookeeper.

This article comes from the frontline activities of the Royal Zoological Society of Scotland, whose mission is to connect people with nature and safeguard species from extinction.

About the Royal Zoological Society of Scotland

Founded in 1909, the Royal Zoological Society of Scotland (RZSS) is a wildlife conservation charity and owns Edinburgh Zoo and Highland Wildlife Park. For further information about RZSS conservation projects in Scotland and around the world, please visit rzss.org.uk .