The Environmental Impact of Battery Production for Electrical Vehicles

75% of the world’s total CO2 emissions propelled in recent years by Asian economies come from road transportation. India contributes about 291 million tonnes of CO2 out of the 795 million tonnes emitted in Asian economies. CO2 emissions from the transportation industry alone experienced a threefold increase in the last decade. In response to this, the electric vehicle (EV) market has expanded. Given the rise in fuel prices and the promise to deliver a green alternative to traditional combustion engines, EVs have gained incredible traction in recent years. While the principle of lower emissions is certainly commendable, the environmental impact of battery production is still up for debate.

In India, the EV market has exploded in recent years and the government has now set new targets to achieve a 30%-growth in private electric cars and an 80% growth in two- and three-wheelers by 2030. Projections say India’s EV industry will hit $100 billion by the end of the decade.

The principle of lower emissions in EVs is certainly commendable, the notion of sustainability on account of battery use, however, is still up for debate. There are two primary environmental costs relating to an electric car – the manufacturing of batteries and the energy source to power these batteries. To understand the advantage an EV has over the Internal combustion engine (ICE) vehicle, we must analyse each step of production and not just look at the final product. The manufacturing process begins with building the chassis using a combination of aluminium and steel; emissions from smelting these remain the same in both ICE and EV. However, the environmental impact of battery production begins to change when we consider the manufacturing process of the battery in the latter type.

The Environmental Impact of Battery Production

In India, batteries contain some combination of lithium, cobalt, and nickel. Currently, India does not have enough lithium reserves to produce batteries and it thereby relies on importing lithium-ion batteries from China.

Mining these materials, however, has a high environmental cost, a factor that inevitably makes the EV manufacturing process more energy intensive than that of an ICE vehicle. The environmental impact of battery production comes from the toxic fumes released during the mining process and the water-intensive nature of the activity. In 2016, hundreds of protestors threw dead fish plucked from the waters of the Liqui river onto the streets of Tagong, Tibet, publicly denouncing the Ganzizhou Ronga Lithium mine’s unethical practice of polluting the local ecosystem through toxic chemical leaks. Similarly, the production of lithium was halted in China’s Yichun city after an investigation into the water quality of the Jin river, the main source of residential water, revealed the presence of toxic pollutants.

The additional environmental cost of transporting these batteries results in a higher carbon footprint than ICE vehicles. A 2021 study comparing EV and ICE emissions found that 46% of EV carbon emissions come from the production process while for an ICE vehicle, they ‘only’ account for 26%. Almost 4 tonnes of CO2 are released during the production process of a single electric car and, in order to break even, the vehicle must be used for at least 8 years to offset the initial emissions by 0.5 tonnes of prevented emissions annually. 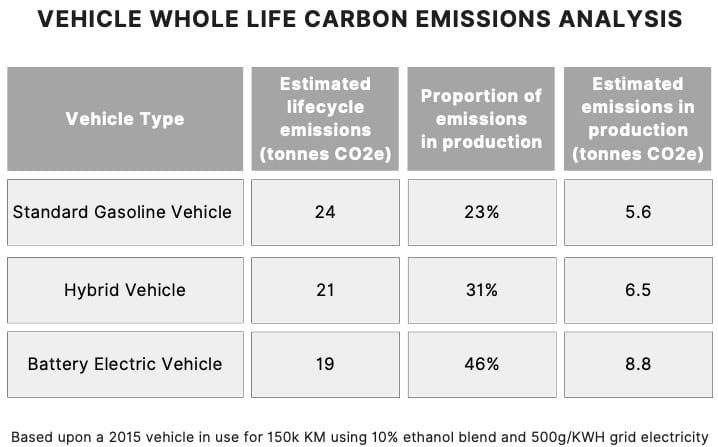 Furthermore, producing one tonne of lithium (enough for ~100 car batteries) requires approximately 2 million tonnes of water, which makes battery production an extremely water-intensive practice. In light of this, the South American Lithium triangle consisting of Chile, Argentina, and Bolivia, experienced heavy water depletion due to intensive lithium extraction in the area. In Chile alone, 65% of the region’s water was used for lithium extraction. The US state of Nevada recently saw protests on account of the Lithium Americas Project due to the prophesied use of enormous quantities of groundwater.

Nickel and cobalt have similar reputations. Satellite analysis in Cuba has shown a devoid of life in over 570 hectares of land and contamination of over 10 kilometres of coastline where nickel and cobalt mines are present. The Philippines had to shut down 23 mines, many producing nickel and cobalt, because of the environmental degradation that it caused.

Stories like these are a testament to the hazards of metal extraction, but they are not exclusive to EV manufacturing – all portable electronic devices contribute to this. Recycling and reusing batteries can provide some relief to the mining process but the technology surrounding it is still inefficient. Currently, Japanese car manufacturer, Nissan reuses the batteries from its EVs to power the automated guided vehicles in factories. Similarly, Volkswagen and Renault have set up recycling plants for batteries. Despite this, only 5% of the world’s total batteries are currently recycled. This is mainly because of the cost and the rather long process required to recycle batteries. Batteries ending up in landfills add to the environmental footprint.

While manufacturing has the biggest footprint, powering batteries also contributes to environmental degradation, especially in developing economies like India. This is because the source of electricity used to power them determines how eco-friendly an EV really is. According to the Ministry of Power, as of 2021, India sourced 61% of its power from thermal sources including fossil fuels like coal, which accounts for 60% of the country’s total emissions. Added to this, is the environmental cost of transporting coal to India. India is currently the world’s second largest exporter of coal to meet the demand and enhance the quality of coal.  The use of coal leads to health hazards due to noxious fumes, higher CO2 emissions, loss of forests, water pollution through mining wastes and kills aquatic life forms. This is further exacerbated by the underutilisation of power capacity (wherein the ability to produce power is higher than what is produced due to archaic power plants and obsolete technology), resulting in wastage that adds to the environmental impact. To ensure emission-free mobility, renewable sources of power are required to power batteries. At present, however, only 21% of installed capacity is accounted for by renewable sources in India.

The push for EVs by the Indian government happened in two phases – the mobilisation of consumer-led demand and a push to increase production capacity. In light of this, in 2020, India launched the National Electric Mobility Mission Plan with the aim of bolstering the adoption of EVs through reduced prices, tax exemptions, and scaling up charging facilities. Incentives for research and development to enable local manufacturing and reduced taxes for domestic producers are also currently being undertaken. However, the main issue is that an increase in demand for EVs can lead to a push in EV prices, especially for batteries. In fact, the price per tonne of lithium in India rose about 70% since January 2022. It is projected that EV prices will rise by 8% in the coming year owing to expensive raw materials. This is further exacerbated by the Ukraine-Russia war, given that Russia supplies 20% of the world’s nickel which is used by battery manufacturers in combination with lithium. Further demand from consumers and quick adoption of EVs by the government could lead to indiscriminate mining of nickel, cobalt, and lithium, which are finite resources, leading to even more environmental harm.

The bottom line is that while EVs have the benefits of no emissions and lowered noise levels during functioning, it is hard to consider them to be truly eco-friendly owing to the issues listed in this article. A push for sustainable mining and responsible sourcing of raw materials can prevent the socio-environmental issues that come with lithium batteries.

Decarbonising the supply chain is still possible and requires shifting to low-carbon hydrogen and biofuels to process lithium as well as having manufacturers provide transparent data of the carbon footprint at each process of manufacturing. Indeed, this would enable car manufacturers to choose suppliers with a lower carbon footprint. Furthermore, a plan of action should first be made towards increasing the composition of renewable energy to power batteries, enhancing technology to meet recycling and reuse needs, and creating a mechanism for the safe disposal of batteries.

Lakshmi R B is a sustainability enthusiast based out of India. She graduated from Christ University, India with a master's degree in applied economics and currently works in credit risk management at a private international bank. She additionally runs an Instagram account (tales.and.tails) to promote environmental awareness using the art medium.