The UK government has announced the ban of new petrol and diesel cars from sale after 2030. The ban had initially been planned for 2040 but has been brought forward under Prime Minister Boris Johnson’s 10-point plan to tackle climate change.

Currently, fewer than 1% of cars on UK roads are powered entirely by electricity, so the new announcement to ban the sale of petrol and diesel cars after 2030 will require a massive investment in the infrastructure needed for electric vehicles.

Industry insiders, including president of the Automobile Association, Edmund King, says that this includes adding more charging stations and a better supply of cars that are also affordable.

According to Sky News, the only country with a more ambitious electric vehicles target is Norway, which will ban the sale of new petrol and diesel cars in 2025. The UK is planning to bring all greenhouse gas emissions to net zero by 2050.

Johnson says, “Our green industrial revolution will be powered by the wind turbines of Scotland and the North East, propelled by the electric vehicles made in the Midlands and advanced by the latest technologies developed in Wales, so we can look ahead to a more prosperous, greener future.”

The 10 points in UK’s green plan are:

While many have welcomed the plan, Chris Stark, chief executive of the Committee on Climate Change, said the prime minister’s plan was “a bold statement of ambition” but added, “What’s missing is the road map to achieving it.”

The Clean Air Network, an NGO focusing on air pollution in Hong Kong, has welcomed the government’s efforts to bring environmental protection into its post-COVID-19 recovery plans, but calls the proposed scheme a ‘short-term and piecemeal measure’.

As part of the Hong Kong government’s plan to revive the economy post-COVID-19, the secretary for the environment announced a Green Employment Scheme that will provide more than 500 time-limited jobs in electric vehicle popularisation, waste reduction and recycling. Positions under the scheme include environmental project coordinators, education officers, eco-tour guides and environmental investigators and will mostly last for about six months to a year, according to the bureau.

In a letter to the South China Morning Post, Patrick Fung, the CEO of CAN, says that the government’s electric vehicles road map represents a good opportunity for the government, private sector, experts and civil society to plan a ‘future of zero-emission mobility that serves not only economic but also environmental health goals’ and urges the government to invest more in electric or zero-emission vehicle development.

The Environment Bureau (ENB) has earmarked HKD$2 billion to launch a pilot scheme to be rolled out this year that will subsidise the installation of electric vehicle charging stations in private residential buildings.

Hong Kong appears to be dragging its feet in addressing the causes of air pollution. Since 1998, there has been no plan to further extend the roadside monitoring network and consequently, there are only three stations in the city that measure air pollution at the street level. Further, the government’s Clean Air Plan for Hong Kong, published in 2013 as the core strategy to improve the city’s air quality, will expire this year and it is unknown what will replace it.

Fung says, “If Hong Kong aspires to become a ‘beacon city’ for zero-emission mobility, the economic momentum of the electric vehicle initiative should not be underestimated. To maximise the environmental health gain, the road map should cover not only private passenger vehicles, but also public transport and goods vehicles.”

Following its plans to shift forward the internal combustion-engine vehicles ban to 2035, the British government’s allocation of an additional £1.3bn to stimulate the uptake of electric vehicles (EVs) has been lauded as a concrete step forward for sustainability efforts. Singapore is also powering forward with plans to make electric vehicles cheaper and more accessible. While necessary in moving towards a low-carbon future, this has also attracted criticism over its protracted timeline, while sparking debate on the purported benefits of electrifying transport. Moreover, EV adoption continues to be inhibited by concerns over affordability and practicalities of charging, which are especially pronounced in many developing countries.

Being the world’s first major economy to legislate a net-zero emissions target by 2050, the UK has adopted recommendations by the Committee on Climate Change to hasten the electrification of its vehicle fleet. Despite sales volumes of battery EVs having tripled from January 2019 to January 2020- from 1 334 to 4 054 vehicles, amidst an overall 7% decline in the domestic automotive industry– battery electric vehicles still have an overall UK market share of less than 3%. Since plenty of work remains, increased funding for EV purchase subsidies and development of charging infrastructure will go a long way in improving EV affordability while alleviating concerns of the battery going flat while driving- commonly referred to as ‘range anxiety’.

Meanwhile, hybrid sales climbed in the same period, with close to one in five cars sold in the UK either fully electric or using technology that includes both an engine and a battery.

The industry is facing conflict over the future of hybrid cars, as the government is planning a consultation with a view to banning them by 2035 alongside petrol and diesel vehicles; previous plans for a ban on petrol and diesel sales in 2040 allowed the sale of hybrid vehicles that can drive for a reasonable distance using only battery power.

Singapore plans to phase out petrol vehicles by 2040, paving the way for greater adoption of EVs. Incentives for drivers to switch to EVs have been announced, including extension of the Vehicular Emissions Scheme to light commercial vehicles, rebates for early adoption and the revision of road taxes for qualifying vehicles.

The global EV market will reach a tipping point by 2022 when the cost of owning an EV will be on par with internal combustion engine vehicles, but there will be a supply gap of almost 14 million EVs in 2030, marring Singapore’s efforts.

The Republic has set the goal of creating 28 000 charging points, a significant addition to the current 1 600. 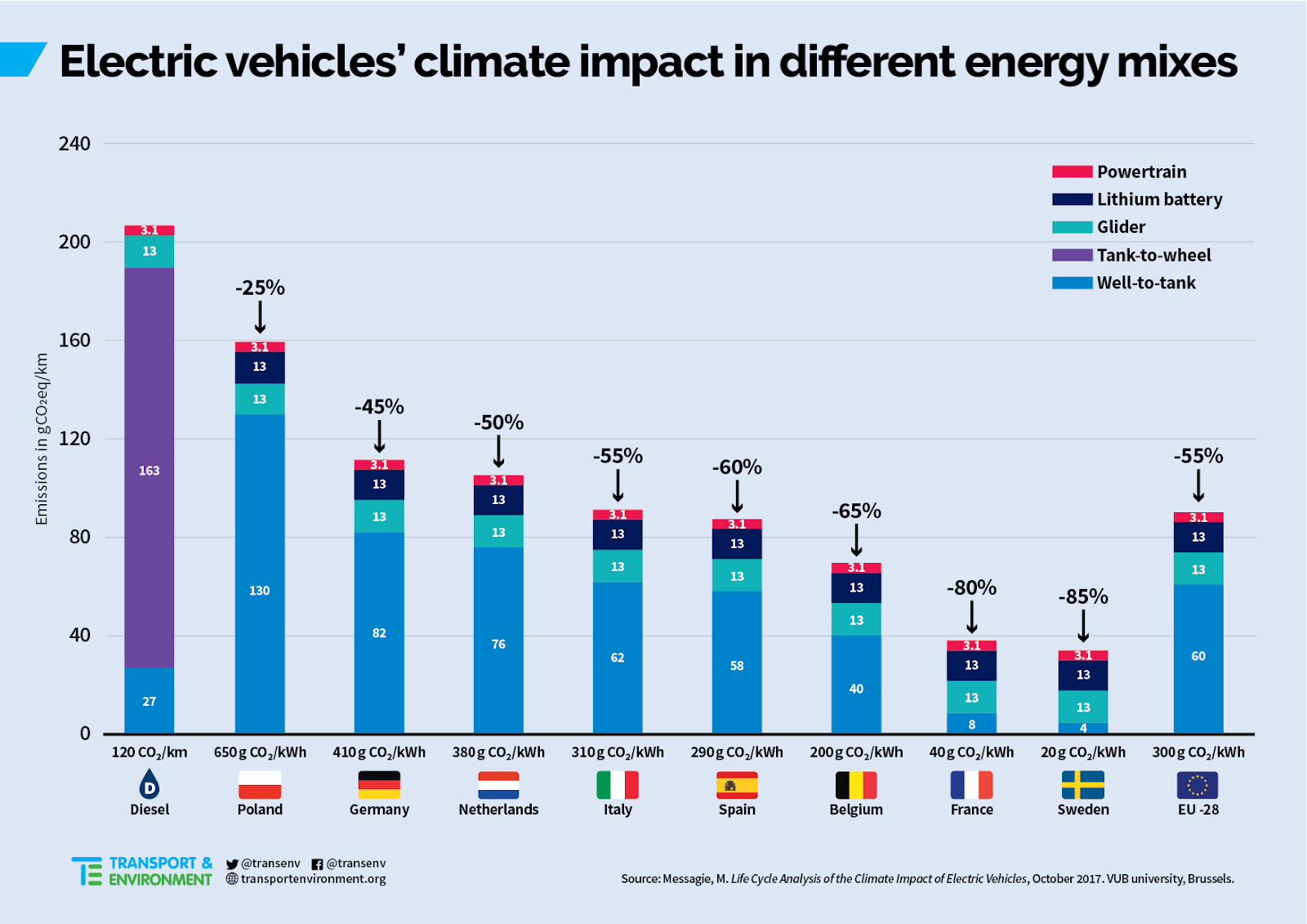 Amidst the optimism surrounding cleaner transport, it is worth noting that environmental benefits from vehicle electrification are not reaped equally by all countries. While averting air pollution in urban centres, EVs are ultimately powered by electricity, which renders them only as clean as their energy source. Logically, countries which are heavily dependent on fossil fuels have comparatively little incentive to prioritise EV uptake, since investing in alternative energy generation yields more immediate returns in reducing environmental footprint.

This notion renders EV uptake in the UK feasible; the proportion of its power generation mix made up by fossil fuels fell to a record low in December 2019, after renewable energy became the UK’s largest source of electricity, with wind and solar energy accounting for nearly 39% of its electricity in the quarter of 2019. Coal-fired power stations contributed 1% of the UK’s electricity in the same period. After two coal plants- Aberthaw B and Fiddler’s Ferry- close in March, the UK will have four coal-fired power stations.

In regions (for example, much of ASEAN) where the automotive industry features prominently as an economic sector, it is challenging even for established EV manufacturers like Tesla to successfully enter the market, due to lack of brand recognition and reliable procurement chains. 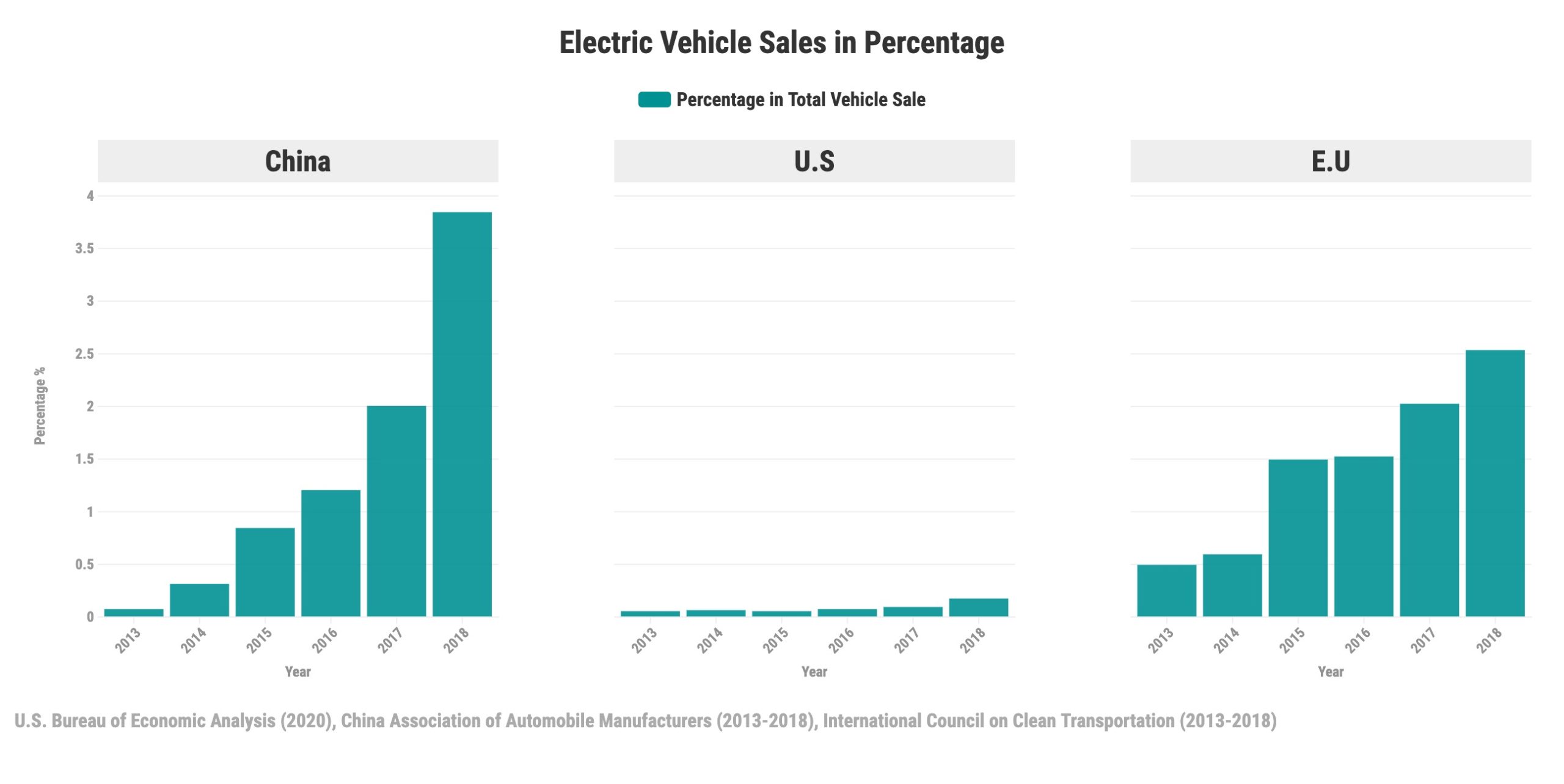 Without aggressive policy action by these countries to increase accessibility of electric vehicles to the general populace, it is inconceivable that smaller companies can attain the scale of production necessary to stimulate domestic original equipment manufacturers (OEMs) into rethinking their product lines. Specialising in electrification of two-wheeled vehicles could be a more effective way of catalysing regional-scale disruption. By focusing on transition towards public transport, these governments which currently appear as laggards in the EV race could end up as global leaders in sustainable transport in the decades to come.