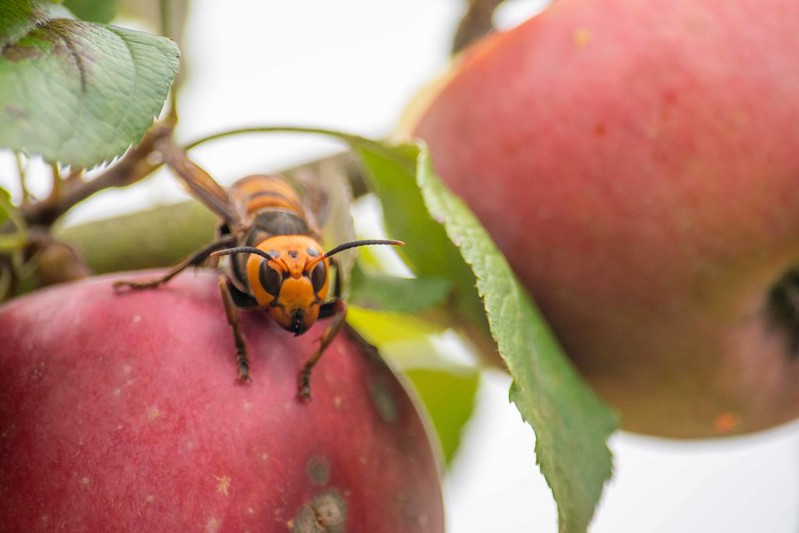 The first nest of Asian giant hornets found in the US has been successfully destroyed by scientists. Found in the state of Washington, the nest was found by putting tracker devices on the hornets and was sucked out of a tree using a vacuum hose. These hornets target honeybees, which are needed to pollinate crops, and pose a threat to both them and humans.

In May, Earth.Org reported that the invasive species of insects, also called “murder hornets” had been found in the US for the first time, prompting concern that they would pose a threat to the already-endangered European honeybee as well as humans. These hornets are able to destroy honeybee colonies in a matter of hours and they have a powerful sting and can spit venom.

The nest in Whatcom County, Washington state, was found when entomologists used dental floss to tie tracking devices to three hornets. There were around 100 insects in the nest. A crew of scientists wearing protective suits vacuumed the insects from the tree, which will now be cut down to dig the queen out of hiding and remove any further nests. To kill any remaining hornets still in the nest, the team pumped carbon dioxide into the tree. They then sealed the tree with spray foam, wrapped it again with cellophane and then placed traps nearby to catch any hornets who may have been away during the operation and returned to the tree.

Two queens were captured; they were possibly either both “virgin queens” preparing to leave the nest and found their own colonies, or one was a virgin and the other an old queen who may have spawned the nest. 85 hornets died in the operation, while 13 were captured alive.

These hornets are among the world’s largest wasps, with the queens reaching over 5cm long. Their sting can penetrate humans’ protective clothing but they rarely target humans- about 40 people die annually in Asia from their stings.

Their natural habitat is in areas of Asia from China to Japan, but last year, there were several sightings of single hornets in North America.

While conservationists are concerned about falling insect populations, it is sometimes necessary for invasive species, in this case the nest of Asian giant hornets, to be destroyed to protect native insect species.