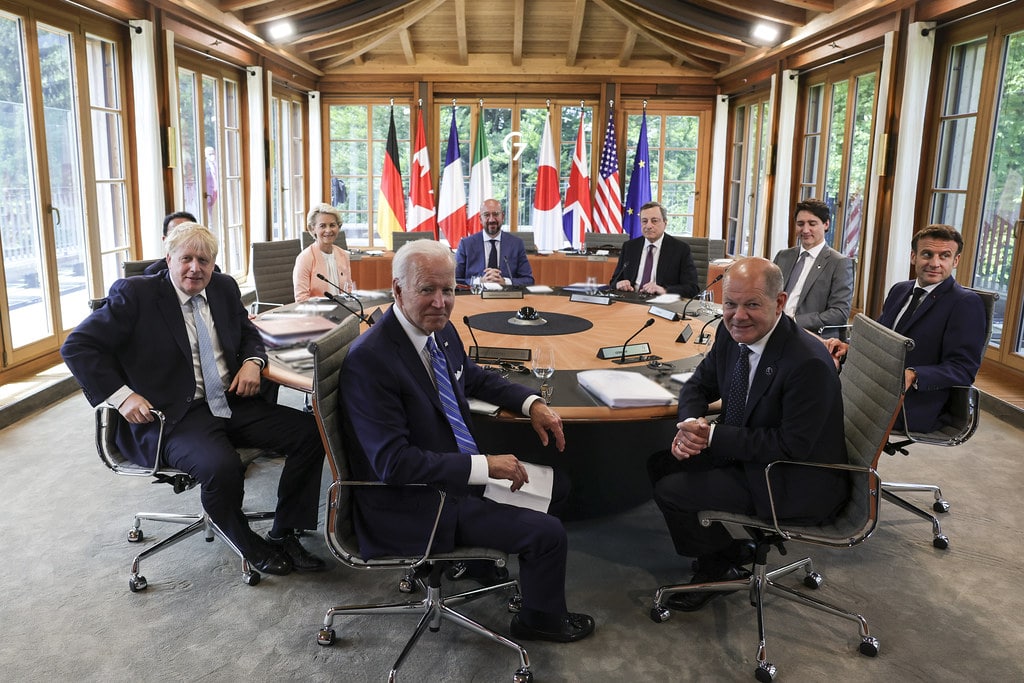 G7 leaders gathered near Munich to discuss Russia’s war on Ukraine, the energy transition, and the incumbent food crisis. While committing to ‘predominantly’ decarbonising the power sector by 2035, the group of leading economic powers left wiggle room for fossil fuels investments, backing the financing of overseas projects provided that they are consistent with prior climate-change agreements.

The 48th G7 summit that came to an end on Tuesday took place at a time of significant geopolitical and economic turbulence. Leaders of the world’s seven largest advanced economies gathered in Schloss Elmau near Munich, Germany, to discuss the globe’s most pressing issues. On the agenda were Russia’s invasion of Ukraine, the global economic crises exacerbated by the war, vaccine equity, and the climate emergency.

Published on the last day of the summit, the Communiqué said leaders agreed to “a highly decarbonised road sector by 2030” as well as “a fully or predominantly decarbonised power sector by 2035”, reaffirming their commitment to the Paris Agreement.  In addition, they pledged to prioritise what they called “concrete and timely steps towards the goal of accelerating phase-out of domestic unabated coal power generation.”

Going forward, the leaders raised the possibility to implement price caps on Russian oil prices in a bid to deplete Moscow’s war chest and “secure energy supply and stop the increases in energy prices driven by extraordinary market conditions” – the statement said.

However, the decision on decarbonisation leaves countries open to continue using fossil fuels if their greenhouse gases are captured. Current technology cannot capture 100% of greenhouse gases emitted by the burning of fossil fuels. Moreover, in their final statement following the three-day summit, the G7 leaders said that because of the exceptional circumstances arising from the war in Ukraine, “publicly supported fossil fuel investments can be appropriate as a temporary response.”

While having no intention of compromising on their climate and environmental goals, the agreement reached by the leaders of Canada, France, Germany, Italy, Japan, the United Kingdom, and the United States is seen as a compromise, as some G7 countries race to replace Russian energy, with Europe in particular struggling to diversify supplies.

“Gas will be needed temporarily and that is why there may be investments that make sense, in this transition phase, and that therefore may need to be supported,” Scholz told reporters after the summit. His country has responded to Russia’s cuts by reviving coal plants and providing financing to secure gas supplies from other exporters. Similarly, Draghi said publicly on Sunday that there are short-term needs for investment in gas infrastructure “in developing countries and elsewhere.” At a news conference on a G7 investment drive in developing nations – as reported by Reuters – Draghi said it should be possible to convert such infrastructure to use hydrogen in the future.

Luca Bergamaschi, executive director of the climate change think tank ECCO told Bloomberg that, while there is “no backtracking from the COP26 commitment”, the ultimate proof lies in the investment choices that the G7 countries will make over the next months.

EO’s Position: The current energy crisis may be hindering the current pace of global green transition, forcing countries to step up their fossil fuel production. But there is no doubt that the only way the world will ever truly achieve energy independence is to phase out fossil fuels altogether. Thus, countries must stop fossil fuel investments as soon as possible.