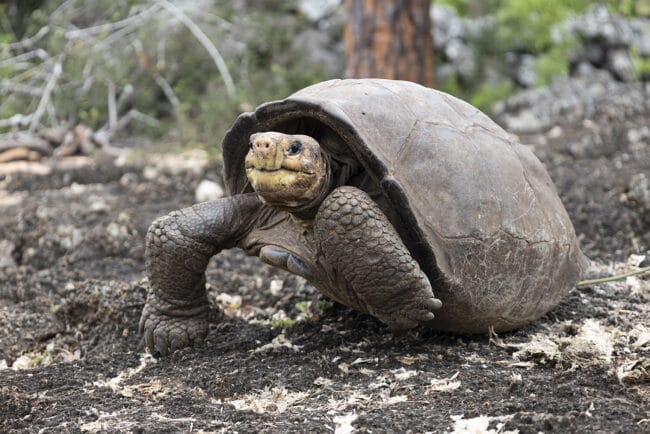 Scientists have confirmed that a giant Galapagos tortoise found on Fernandina Island comes from the lineage of a species that has not been seen in 113 years.

A lone female giant tortoise that was found on an active volcano in the Galapagos belongs to a species thought to have been extinct more than 100 years ago, scientists have confirmed.

In 1906, the Chelonoidis phantasticus, also known as the fantastic giant tortoise, was discovered and collected by explorer Rollo Beck. It is named ‘fantastic’ for its drastically different physical characteristics from other Galápagos tortoises. The shape of its shell features extreme flaring around the edge with unusually prominent “saddlebacking” at the front section of the shell. Since then, no other fantastic tortoises were ever observed again.

Then in 2019, researchers spotted a female giant tortoise on the Galapagos’ Fernandina Island, which consists of a largely unexplored volcano. They believed her to be a different species that may have been carried to the island by a hurricane, instead being native to the islands. They nicknamed her Fernanda, and decided to study her DNA at the Galápagos National Park Tortoise Center.

Researchers at Princeton and Yale sequenced Fernanda’s genome against the genome from the tortoise collected in 1906, as well as other living Galapagos giant tortoise species. The data revealed that Feranada is in fact the only known member of the fantastic giant tortoise.

“The finding of one alive specimen gives hope and also opens up new questions, as many mysteries still remain,” Adalgisa Caccone, research scientist at Yale and co-author of the study, said in a statement. “Are there more tortoises on Fernandina that can be brought back into captivity to start a breeding programme? How did tortoises colonise Fernandina, and what is their evolutionary relationship to the other giant Galápagos tortoises?”

According to the paper published in journal Communications Biology, Fernanda is at least 50 years old but attributed her stunted growth as to why her physical traits aren’t quite as pronounced as the giant Galapagos tortoise found in 1906.

There are believed to be 15 species of Galápagos tortoises, according to the conservation organisation Galápagos Conservancy, all of which are listed in the International Union for Conservation of Nature’s Red List of threatened species as either vulnerable, endangered, critically endangered or extinct.

The Galápagos Archipelago is home to an array of exotic animals and species including marine iguanas, penguins, sea lions and the frigatebird. The incredible wildlife on the volcanic islands were also the inspiration behind Charles Darwin’s theory of evolution and his landmark work, On the Origin of Species.

Last year, the President of Ecuador Guillermo Lassohe announced he will expand the marine reserve around the Galapagos Islands to provide greater protection against illegal fishing and climate change for endangered migratory species in the area.