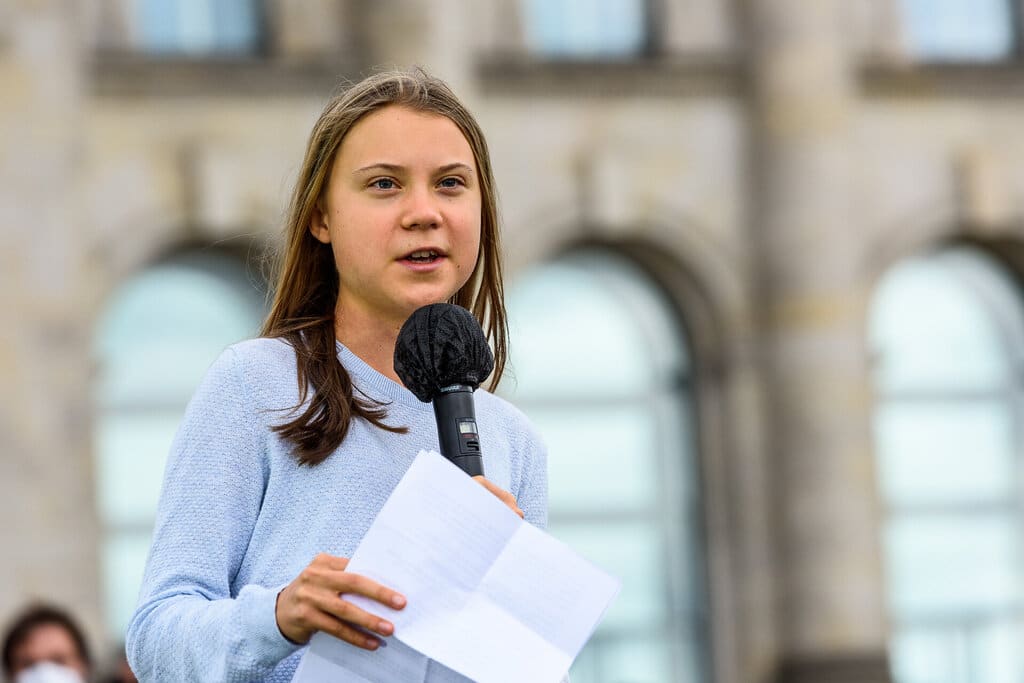 Undoubtedly the world’s most notable climate activist today, Greta Thunberg first gaining worldwide attention in 2018 when she started organising various protests outside the Swedish Parliament calling for stronger climate action. Her efforts quickly transformed into a global movement named Fridays for Future, and  inspired numerous other youths to join the cause and raise their voices. The young Swedish activist has since made a number of blunt yet memorable speeches at various international conferences criticising world leaders for their failure to address the climate crisis. Read on for some of the most iconic Greta Thunberg quotes and speeches.

On World Leaders Over Their Promises to Address Climate Change

“Build back better. Blah, blah, blah. Green economy. Blah blah blah. Net zero by 2050. Blah, blah, blah. This is all we hear from our so-called leaders. Words that sound great but so far have not led to action. Our hopes and ambitions drown in their empty promises.”

“But they’ve now had 30 years of blah, blah, blah and where has that led us? We can still turn this around – it is entirely possible. It will take immediate, drastic annual emission reductions. But not if things go on like today. Our leaders’ intentional lack of action is a betrayal toward all present and future generations.”

Failing the Young and Future Generations

“My message is that we’ll be watching you. This is all wrong. I shouldn’t be up here. I should be back in school on the other side of the ocean. Yet you all come to us young people for hope. How dare you!”

“You have stolen my dreams and my childhood with your empty words. And yet I’m one of the lucky ones. People are suffering. People are dying. Entire ecosystems are collapsing. We are in the beginning of a mass extinction, and all you can talk about is money and fairy tales of eternal economic growth. How dare you!”

“You are failing us. But the young people are starting to understand your betrayal. The eyes of all future generations are upon you. And if you choose to fail us, I say: We will never forgive you. We will not let you get away with this. Right here, right now is where we draw the line. The world is waking up. And change is coming, whether you like it or not.” – At the UN Climate Action Summit on September 23, 2019.

We Need to Act As If the World is on Fire

On Being Given False Hope

“ You lied to us. You gave us false hope. You told us that the future was something to look forward to. And the saddest thing is that most children are not even aware of the fate that awaits us. We will not understand it until it’s too late. And yet we are the lucky ones. Those who will be affected the hardest are already suffering the consequences. But their voices are not heard.”

“The climate crisis is both the easiest and the hardest issue we have ever faced. The easiest because we know what we must do. We must stop the emissions of greenhouse gases. The hardest because our current economics are still totally dependent on burning fossil fuels, and thereby destroying ecosystems in order to create everlasting economic growth.” – In an address to the British Parliament on April 23, 2019.

COP26 Was a Failure

“It is not a secret that COP26 is a failure. It should be obvious that we cannot solve a crisis with the same methods that got us into it in the first place.”

“The COP has turned into a PR event, where leaders are giving beautiful speeches and announcing fancy commitments and targets while behind the curtains the governments of the global north countries are still refusing to take any drastic climate action. It seems like their main goal is to continue to fight for the status quo.. And COP26 has been named the most exclusionary COP ever. This is not a conference. ”

“But the facts do not lie. And we know that our emperors are naked.” – In an address at the Fridays for Future Scotland rally during COP26.

“We live in a strange world where children must sacrifice their own education in order to protest against the destruction of their future. Where the people who have contributed the least to this crisis are the ones who are going to be affected the most.” – In a speech rally in Berlin that took place between March 29-21 2019.

“When I’m taking action, I don’t feel like I am helpless and that things are hopeless, because then I feel like I’m doing everything I can,” she said. “And that gives me very much hope, especially to see all the other people all around the world, the activists, who are taking action and who are fighting for their present and for their future.” – In an interview in October 2021.

We Need to Take Responsibility Now

“If I live to be 100, I will be alive in the year 2103. When you think about the future today, you don’t think beyond the year 2050. By then I will, in the best case, not even have lived half of my life. What happens next? In the year 2078, I will celebrate my 75th birthday. If I have children or grandchildren, maybe they will spend that day with me. Maybe they will ask me about you, the people who were around back in 2018. Maybe they will ask why you didn’t do anything while there still was time to act. What we do or don’t do right now, will affect my entire life and the lives of my children and grandchildren. What we do or don’t do right now, me and my generation can’t undo in the future.”

“So, we can’t save the world by playing by the rules, because the rules have to be changed. Everything needs to change and it has to start today.” – At the TEDxStockholm on November 24, 2018.

If you liked these Greta Thunberg quotes, you might also like:  COP Is Only A Part Of The Process, The Real Fight Goes On