How Can The Great Barrier Reef be Saved? 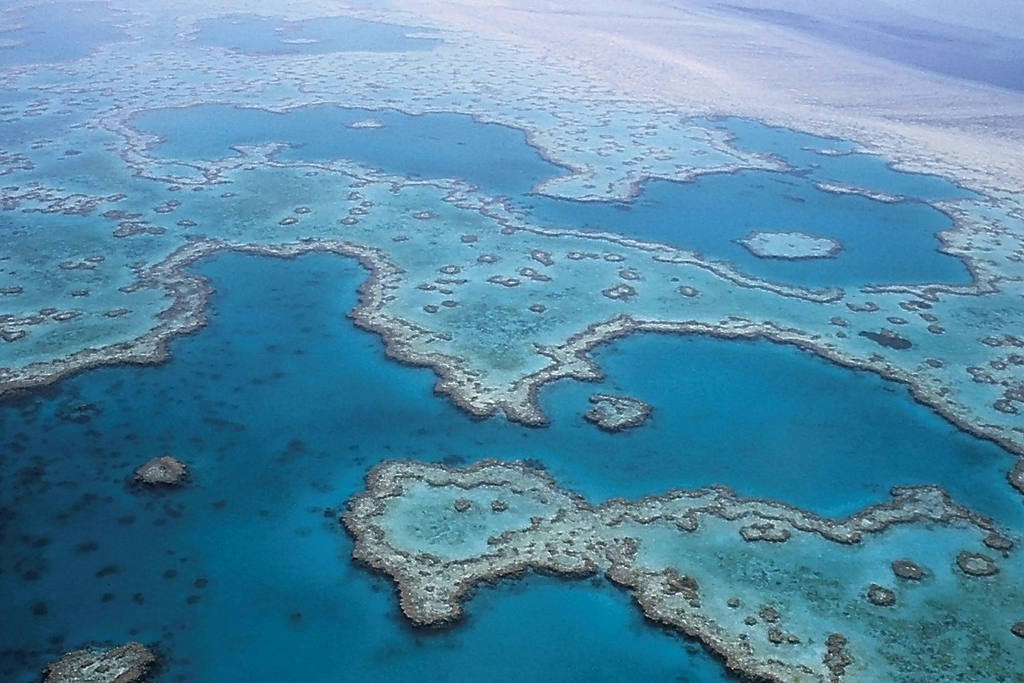 Coral is essential for life on earth. At the same time, it is one of the planet’s most threatened ecosystems, directly impacted by global ocean warming from anthropogenic climate change. The Great Barrier Reef, one of UNESCO’s World Heritage Sites known for its ‘enormous scientific and intrinsic importance’, has just undergone its third mass bleaching event in five years, affecting 25% of the entire reef. How do we save this marvel before it’s too late?

UNESCO has warned that coral reefs across all World Heritage Sites will cease to exist by the end of the century if greenhouse gas emissions are kept at business-as-usual levels. The IPCC says that limiting global warming to 1.5C rather than 2C or above will mean the difference between survival and loss of the majority of coral ecosystems. Such a scenario will have disastrous effects on the interconnected marine ecosystem: whilst coral only covers 0.1% of the ocean floor globally, 25% of marine life depends on coral for their life cycles. The earth’s oceans are also the world’s largest carbon sinks, storing carbon dioxide in algae, vegetation and coral.

What is coral bleaching?

Coral bleaching is a reaction to heat stress. When corals are immersed in warmer-than-average water for extended periods of time, the algae- zooxanthellae– which lives inside coral tissue, gets expelled. This provides food and colour and helps corals to reproduce, and thus this expulsion results in coral becoming ‘bleached’ and losing its colour. Severe bleaching can kill corals, but they also have the potential to recover if temperatures stabilise- yet the climate crisis is increasing both the frequency and severity of bleaching events.

Current surveys of the most recent bleaching incident in the Great Barrier Reef estimate that the impacts are more severe and widespread than all previously recorded outbreaks. According to the Great Barrier Reef Marine Park Authority, the severity of the damage varied, but some areas that had been spared during mass bleaching events in 2016 and 2017 (where 20% of shallow water reefs were bleached) had now experienced moderate or severe bleaching. Experts have suggested that the trends of bleaching suggest that it will become a near-annual event.

In 2019, Australia downgraded its outlook on the reef from ‘poor’ to ‘very poor’ due to climate change risks. Tropical coral reefs tend to be at a higher risk of bleaching during times when the Pacific Ocean experiences the ‘El Niño’ effect: a climate pattern that occurs when sea surface temperatures in the tropical Pacific Ocean rise to above-normal levels for an extended period of time. Such a process is likely to be intensified by rising global temperatures; one study suggests that strong El Niño events could double in frequency in the future due to the climate crisis: the potential for unprecedented interactions between El Niño and anthropogenic  global warming is significant, with coral bleaching just one of the ecosystems set to suffer. 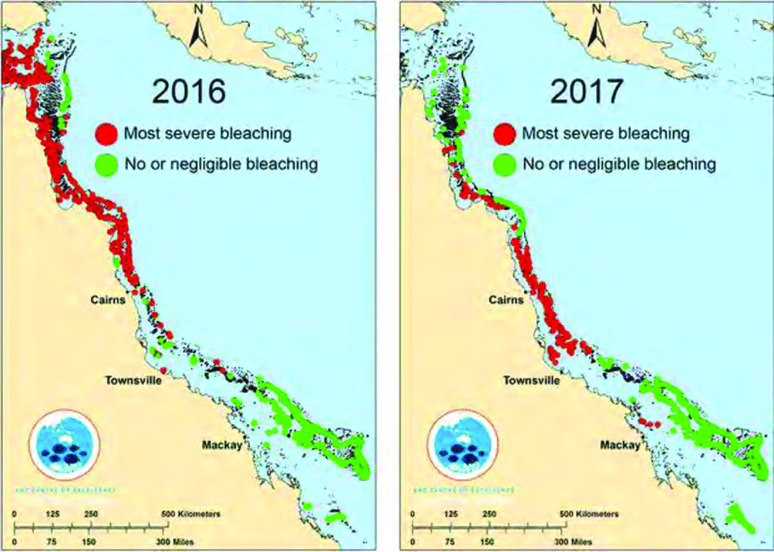 According to Dr Mark Eakin, coordinator of Coral Reef Watch at the National Oceanic and Atmospheric Administration, there is a risk that this mass bleaching could mark the start of a global-scale bleaching event. The main driving force of this cannot be ascribed to El Niño as it is currently in a neutral year, indicating more towards anthropogenic climate change effects: February was recorded as the hottest month for the Great Barrier Reef on record.

However, some areas of the 2 300km marine park are hardly affected: the authority noted that reefs in the northern and central parts, including near Cairns and Port Douglas, experienced moderate bleaching, and most corals there should recover. Many deeper ocean reefs are avoiding the bleaching entirely.

Aside from its ecological importance, the Great Barrier Reef also provides significant economic value. Its overall economic value has been estimated at $56 billion (AUD), with an annual national contribution of $6.4 billion and generating 64 000 jobs. Protection of the reef must be incorporated in economic models in order to shift thinking into a model whereby coral is treated as an asset that must be conserved.

How to Protect the Great Barrier Reef from Climate Change

Changes to the reef must be monitored closely, with an overall objective of reducing global greenhouse gas emissions. As the IUCN put it: “Limiting global average temperature to well below 2°C above pre-industrial levels and pursuing efforts to limit the temperature increase to 1.5°C, in line with the Paris Agreement on climate change, provides the only chance for the survival of coral reefs globally.”

But scientists in Australia have two key questions regarding the Reef’s future: will governments around the world stick to, and improve on, cuts to greenhouse gases, and if so, how closely will this keep warming to 1.5C? The second question lies in the success of potential adaptation measures. The most recent bleaching episode is fairly patchy, indicating that areas of the reef that have avoided bleaching can still be managed: a combination of prevention and adaptation are crucial for the Great Barrier Reef’s future.

According to Professor Peter Mumby, Professor of Coral Reef Ecology at the University of Queensland and Chief Scientist at the Great Barrier Reef Foundation, a potential avenue for study lies in the scale and diversity of the reef. The reef is made up of 4 000 diverse reefs, 100 of which have been identified as well spread, well connected and currently experiencing cooler ocean temperatures, suggesting there is hope for survival. Focusing attention on the health and sustainability of these reefs, therefore, is crucial.

One particular area of study is ‘assisted gene flow’, proposed by The Australian Institute of Marine Sciences– a process much like IVF for corals. Corals with better heat tolerance, found to be an hereditary trait in corals, can be selected and captured to grow in a lab setting and subsequently dispersed into the ocean for greater resilience. An experiment with 90 parent specimens from three parts of the reef grew 7 500 offspring and subjected them to temperatures of up to 2C warming and related levels of CO2. Many of these corals survived, suggesting that all hope for coral is not lost. Dr Zoe Richards explains the process further:

“The whole goal of a lot of these interventions is to work with species that can be successful on their own. We won’t be able to work with 600 species of corals, but we could probably work with 20 that fill the functional roles of a healthy reef community.

Further, the Australian government has recently backed over 40 concepts in a $150 million research and development programme. The concepts include creating fog and mist over smaller reef areas, using micro-bubbles, ultra-thin natural films and farmed algae to reduce light over smaller areas, stabilising and enhancing damaged reefs with mesh, frames, concrete shapes and 3D printed forms to recreate the complexity of natural reefs and breeding corals that are naturally more heat tolerant and then using their larvae in mass dispersal.

David Mead, who helped coordinate the feasibility study, says, “If we can get the science right and intervene on the reef at scale to build that resilience, then the benefits for Australia environmentally, socially and economically, especially for reef communities, is going to be in the tens of billions of dollars.”