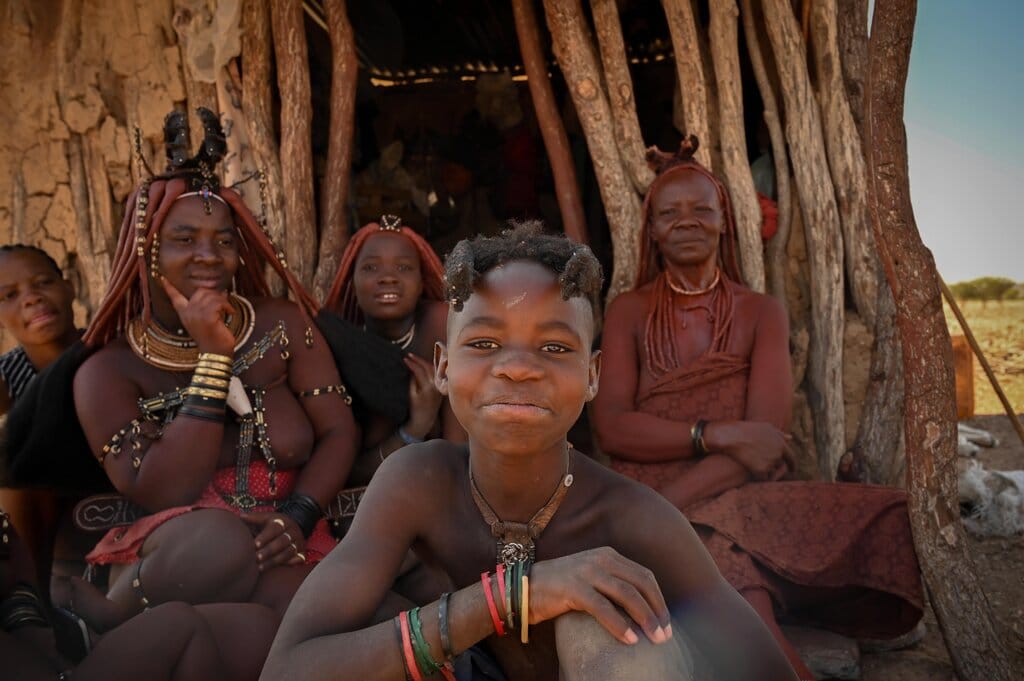 Deep in the heart of Kaokaland in the Namibian desert live the Himba tribe; a group of semi-nomadic pastoralists who have lived there for hundreds of years. But the effects of climate change, combined with a lack of government support and ongoing marginalisation is forcing this iconic tribe to choose which parts of modernity to claim, and which to reject.

If you are familiar with any of Africa’s tribal groups, it is probably the Himba. The tribe are renowned for their unique appearances and their continued adherence to their traditions. The women are bare-breasted and heavily adorned with symbolic jewellery, whilst they cover their bodies with ‘otjize’, a mixture of animal fat and ochre which gives their skin and hair a reddish hue.

Traditionally, the cattle-herders live in wooden huts which encircle a sacred ancestral fire, and daily work revolves around rearing and herding livestock.

They have long avoided contact with the modern world, continuing their quiet lives of pastoral cattle-herding in the barren corner of North-Eastern Namibia for generations. The region had no direct Western influence until well into the 20th century, and little is known about the inhabitants of Kaokoland before the first European expeditions in the remote area.

Resultantly, the Himba have often been presented (in particular in recent tourism brochures) as timeless and archaic, representing a ‘forgotten’ or ‘ancient’ age of Africa. 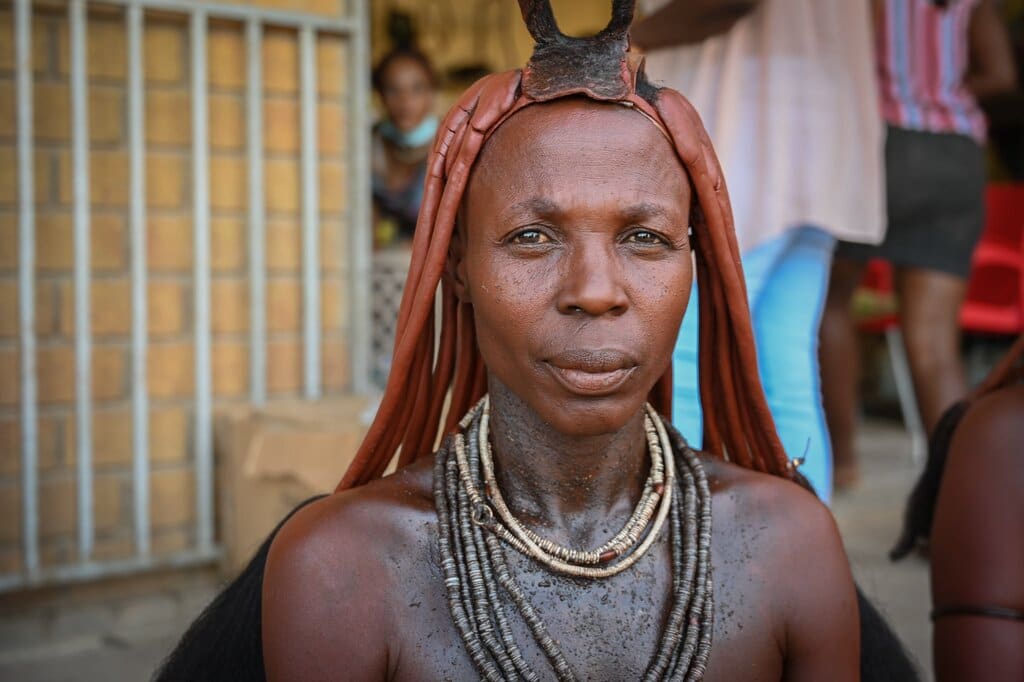 A Foot in Each World

But whilst presented as isolated from the modern world, in reality, many Himba are now moving towards modernity. A tribe in transition, Himba culture is not static nor homogenous, and whilst some aspects of their lifestyle are being left behind, new opportunities await those moving from the barren desert to towns.

For those Himba keen to take the plunge, the nearest town is Opuwo, the capital of the Kunene region. The small town contains schools, shops and petrol stations, and for many newcomers, it is the first taste of life in the 21st century.

For an unfamiliar westerner, it is indeed a strange sight. The town is a melting pot of Namibia’s other tribes too, and large groups converge on the streets of Opuwo, drinking beer, chatting on mobile phones, and gathering in the dozens. Alongside the Himba are the Herero, known for their extravagant Victorian-style dresses, and the Zemba tribe.

Although life might seem more convenient in towns such as Opuwo compared to traditional life, in reality, there are more push than pull factors causing the tribes to up-sticks from their homesteads.

Meeting with Mr Ondoba, a Himba traditional chief whose original homestead is 180km north of Opuwo, he explains why his family has made the journey south. “Life has become far harder for us in recent years,” he says. We sit in the shade of one of Opuwo’s many bars, and he has a miniature spear tucked behind his ear which he uses to snort ground tobacco between sentences. “We lost all of our cattle to drought a few years ago, and that’s why we’re here. Life without cattle- it is impossible.”

Mr Ondoba now owns a small garden in Opuwo to harvest maize and other plants. Whilst he and his family have enough to survive, his current lifestyle is a far cry from the historic practice of cattle-herding.

The loss of cattle makes it practically impossible for traditional life to continue, as cattle are relied on for subsistence; the need to graze cattle has dictated the Himba’s nomadic way of life for hundreds of years. Cattle have cultural significance too, determining social status, and being an integral part of marriage and dowries.

Many other Himba residents in Opuwo share a similar story to Mr Ondoba.

Down the street, sisters Veerii and Ondu sit on the hard floor, drinking beer. They likewise have moved to Opuwo in recent years. “Before, in Onjuva (a homestead about an hour’s drive away) things were better for us. We could live easily. But our cattle were taken- we think by a lion, and we could not stay.”

Namibia’s Community Based Natural Resource Management (CBNRM) programme is supposed to provide compensation when livestock is lost to predators through the human-wildlife conflict compensation scheme. But it appears the scheme’s efforts are proving inadequate for many.

According to Dr Michael Bollig, an anthropologist who has conducted extensive fieldwork in the Kunene region, the human-wildlife conflict compensation is a “cumbersome process, whereby the conditions are nonsensical.”

‘Compensation is a tricky business,” he explains, “conservancy budgets are often too small to adequately compensate for lost livestock, and local communities do not have the administrative infrastructure right away to compensate- how could they?’

“Resultantly, compensation is returned at a quarter of the market price for cattle, sometimes after far too great of a waiting time, and the management is so complicated that very few are successful.”

Veerii and her sister’s experience supports this. “We knew we were on a list waiting for compensation, but we never received the money,” Veerii explains, “If the government helped us just by providing say two or three goats, we could rebuild out livestock and we would not have to beg here.’”

Livestock loss is exacerbated by extreme droughts which have plagued the region in recent years. Some scientists believe these extreme conditions to be linked to climate change.  As global temperatures are set to rise further in the coming decades, the situation in Kunene reflects the general global trend of the effects of climate change impacting socio-economically vulnerable groups, from countries who have contributed the least to global emissions.

For all their hopes of a new life in Opuwo, things perhaps are a disappointment. Life in a town requires money, and it is difficult for incomers to find employment. Many Himba now survive from the government’s pension scheme, often with one person’s pension handout providing for the entire family.

My guide Ueri takes me to the nearby homestead of Otjakati. Though just an hour’s drive from Opuwo, life is far quieter. Here, the elders worry about the fate of those looking for employment in towns.

“They leave looking for a job, but they won’t find one. Even the most educated Himba won’t get a job,” one of the elders explains, “then they turn to things like drinking and end up spending all of the money on alcohol, and then the problems start, like crimes and prostitution.”

Alcoholism certainly appears to be a problem amongst the Himba, and the streets of Opuwo are lined with numerous bars.

Discrimination, and favouritism towards dominant tribes were felt to be reasons as to why few Himba attain employment. “Most Himba cannot even get a sweeping job,” Ueri tells me, “people think we are dirty.” 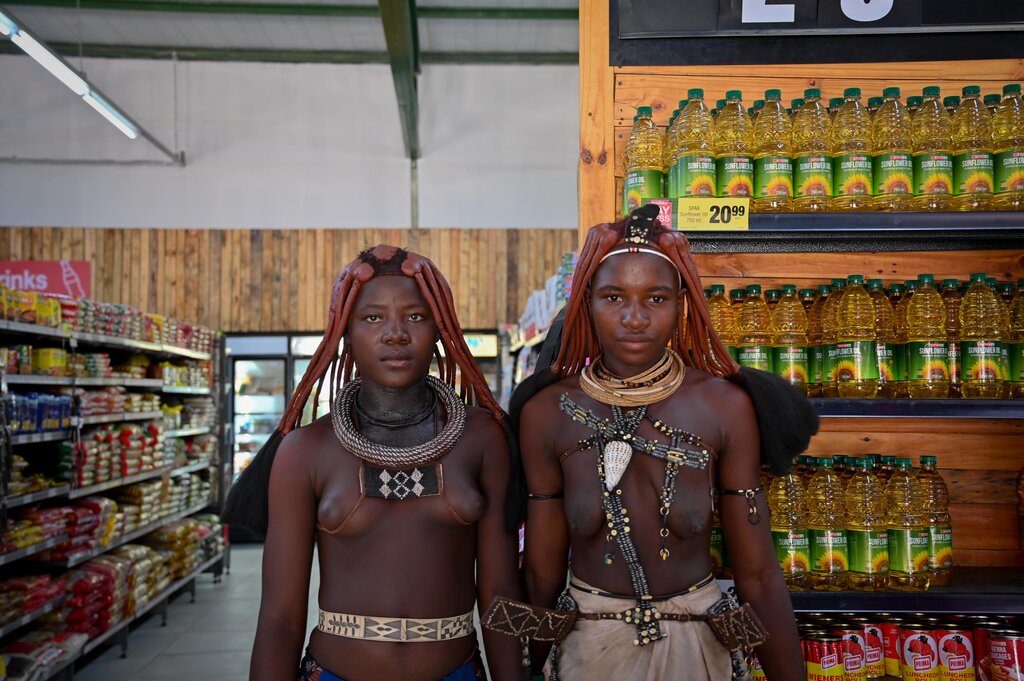 A Tribe in Transition

The world for the Himba tribe is changing. With inadequate compensation when cattle are lost to predators, exacerbated by the effects of climate change including an increased frequency of droughts, it is likely that more Himba will be forced towards towns like Opuwo in search of employment.

Anthropologist and conservation pioneer Margie Jacobson, who has spent decades conducting fieldwork with the Himba, explains how this move is impacting the group.

“Whilst they continued to be great subsistence herders for generations after contact with so-called ‘modernity’, she says, “now their social systems are beginning to erode.”

She explains: “those beautiful democratic and powerful structures are breaking down. With the introduction of euro-centric education, party politics, wage labour and a cash economy, in many cases, every man is for himself.”

Recent research also indicates a loss of indigenous knowledge as Himba move to towns, with cosmopolitan Himba experiencing a reduced focus in perceptive optical tests than their pastoral counterparts.

But although they now face a plethora of unfamiliar problems as the modern world encroaches upon them, and increasing droughts devastate their food security and traditional subsistence strategies, their historical resilience in the face of change should give us hope. Culture is not static, and the Himba should not be perceived as fossilised relics of a past time.

And why shouldn’t they enter the ‘modern’ world?

“The Himba are people,” says Margie, “they want the things that we want, and they have every right to them.”

Asking the elders at Otjakato “where will you be in 20 years’ time?” they assert in response, “we will still be in the homestead, where we belong… but of course, we will visit Opuwo”.

They may well need to visit towns like Opuwo more frequently in the future, given the likely worsening of food security in the Kunene region, as climate change increases drought frequency in the area, and causes havoc on livestock populations.

Note: some names have been changed.

All featured images by: Izzy Sasada