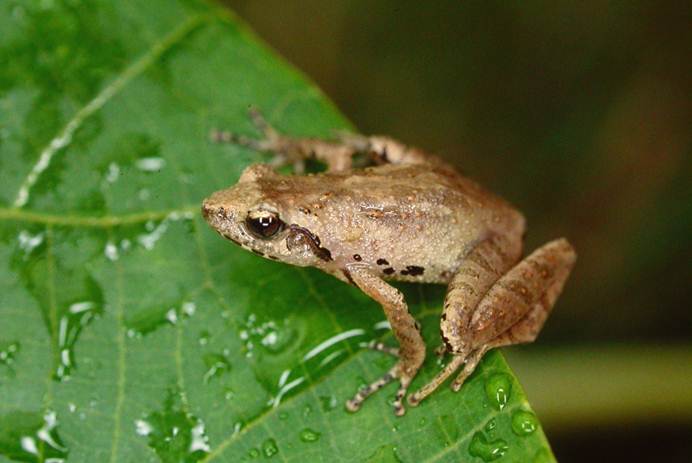 Smaller than an inch and weighing less than a gram, the Romer’s Tree frog surprised scientists and conservationists alike when it managed to survive the 20-billion-dollar construction of the Hong Kong International Airport in 1998.

“I think of it as a bit of a David and Goliath situation,” Dr. Michael Lau says with a laugh, a renowned herpetologist and Chairman of the Hong Kong Wetlands Conservation Association, known for the rediscovery of the Romer’s Tree frog.

Originally discovered in 1952 by the naturalist J.D. Romer in a cave on the third largest island in Hong Kong, Lamma Island, the frogs were declared extinct after the cave partially collapsed in 1953 and was thought to have sealed away the species forever.

Whilst working on an amphibian and reptile field guide for the Hong Kong Council, Lau and his friends decided to keep an eye out for the missing species, and in 1984 they rediscovered the frog species in abandoned cave on Lamma Island.

Lau decided to search for the species on other Hong Kong islands, finding it on Chek Lap Kok, Lantau and Po Toi. This discovery created significant media interest regarding potential ecological issues of the airport construction plans on Chek Lap Kok. “There were a number of environmental issues but the presence of the Romer’s Tree frog was definitely the biggest one,” Lau says.

With the heightened media attention people were aware of the importance of the Romer’s Tree frog, however it was clear that the construction of the airport would still go ahead. “Hong Kong felt they needed a new airport,” Lau says. An increase in air traffic since the 1960’s was causing difficulties at the old Kai Tak Airport and in 1989 the Hong Kong government confirmed Chek Lap Kok as the site for the new airport.

It was a race against time to save this endemic Hong Kong frog from the threat of extinction once again: “I had about a year to rescue the frogs before they started the large-scale construction of the airport,” Lau says.

As little was known about the species it was deemed to be irresponsible to catch them and release them somewhere else, so Lau decided to carry out ecological research on the species to determine what were the proper needs of the species and identify the best place to release them. Lau moved 220 adult frogs as well as a variety of juveniles, metamorphlings, tadpoles and egg clutches to Hong Kong University for further study.

Lau determined it was too risky to store all the rescued frogs in one location due to potential disease outbreaks or power failure and enlisted the help of global zoos to take in the endangered frog species. Two zoos agreed to help: Melbourne Zoo and Frankfurt Zoo.

Chris Banks, Manager of Conservation Partnerships at Melbourne Zoo, explained that the entire island of Chek Lap Kok was cleared for the construction of the airport. All native habitat was destroyed, making the island uninhabitable tor wildlife.

“As such, all Romer’s Tree frogs would be either killed during the construction of the airport, or would die as a result of loss of their habitat and food supply” Banks finishes. Their solution? Banks and Lau decided they would work together to distribute the frogs to Hong Kong University (HKU), Kadoorie Farm and Botanic Garden, and to both Melbourne Zoo and Frankfurt Zoo.

The reintroduction of Romer’s tree frogs

Thirty frogs were taken by each zoo in 1992, and whilst the relocation program was unsuccessful in Frankfurt, in Melbourne they thrived, with over 700 captive-bred frogs being transferred back to Hong Kong in 1994 and 1995.

When the airport construction finished in 1998, Lau reintroduced the frogs back to Hong Kong. He selected eight sites which he believed to provide the best habitat: native forest cover, flat areas and still pools of water.

Though minute, the frog has proven to be both adaptable and resilient. “A very tiny population of frogs had remained there [on Chek Lap Kok] and survived, defying everyone’s expectations,” Lau says. “They’d survived in the ruins of some villages in the old water troughs and in discarded refrigerators.”

The Romer’s Tree frog is not classed as a capstone species: meaning it is not essential for the health of Hong Kong’s ecosystems, however it is a unique species as it is one of the few amphibian species in Hong Kong that live in forests and do not breed in hill streams.

The Romer’s Tree frog is protected under Hong Kong law, ensuring that if there are any other new developments, the developers must try to avoid ecological impacts on the species, and if that is not feasible they will attempt to mitigate it. Because Ngong Ping in Lantau is home to the largest population of the species, it has been protected as a Site of Special Scientific Interest (SSSI) to further protect the frogs regarding potential developments.

Whilst the species survived the development of the Hong Kong Airport, it still faces a multitude of threats. According to conservationists, the frogs are particularly vulnerable to further development. The mosquito fish – a non-native species that was introduced as a solution to control mosquito numbers in Hong Kong – also poses a major threat, because it eats the frogs’ eggs and larvae.

Another major concern: climate change. The Romer’s Tree frog is known to be a resilient species however it is still susceptible to the changing climate, especially due to its breeding in still bodies of water, as flooding is known to wash away their habitat and breeding areas.

This species has a chequered history. They are still marked as Endangered on the IUCN’s Red List and studies show their population to be decreasing, making it evident this species needs ongoing protection and management.

“Its protection is an important story that needs to be told in Hong Kong to ensure continuing care and action by the community and government,” Banks says. Despite the clear challenges ahead for the Romer’s Tree frog, this species rocky past is proof that with the correct protection and monitoring from both the community and government the Romer’s Tree frog can continue to coexist alongside Hong Kong’s development.

“People think that only iconic species like elephants and tigers will grab people’s attention and we don’t have those in Hong Kong, but we do have a little frog who has got a very unusual history and background,” says Lau with a smile.