World’s Biggest Iceberg, A68a, is on a Collision Path with South Georgia 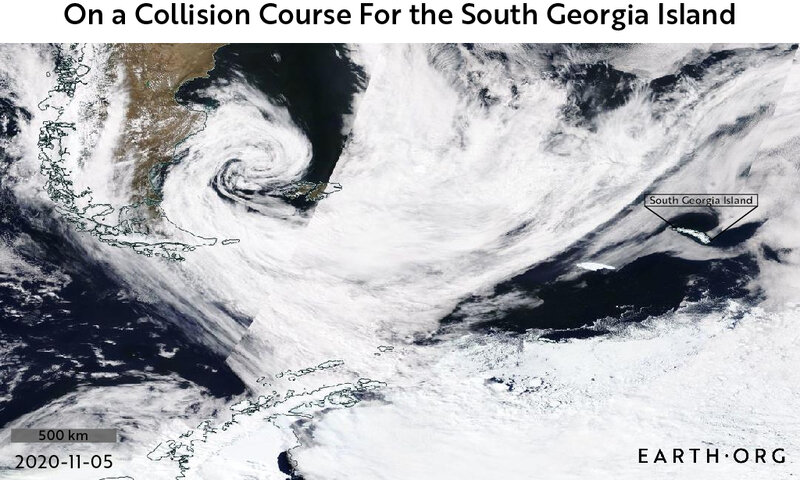 A68a, the world’s biggest iceberg, is heading towards the British Overseas Territory of South Georgia. The Antarctic iceberg is similar in size to the South Atlantic island, and there’s a possibility that it could ground and anchor itself offshore of the wildlife haven, posing a massive threat to local penguins and seals. Earth.Org has mapped its path thus far.

The A68a iceberg weighs hundreds of billions of tons but its relative thinness (a submerged depth of perhaps 200m or less) means that it could drift right up to South Georgia’s coast before anchoring.

South Georgia has been called a “graveyard” for Antarctica’s icebergs, which get drawn up from the continent on strong currents, and their keels get caught in the shallows of the continental shelf that surrounds the island. A68a has been riding this “iceberg alley” since breaking off from Antarctica in mid-2017. It is now just a few hundred kms to the southwest of the island.

You might also like: Australia Releases Report on 2020 Bushfires, Admitting That Climate Change Was the Driving Factor 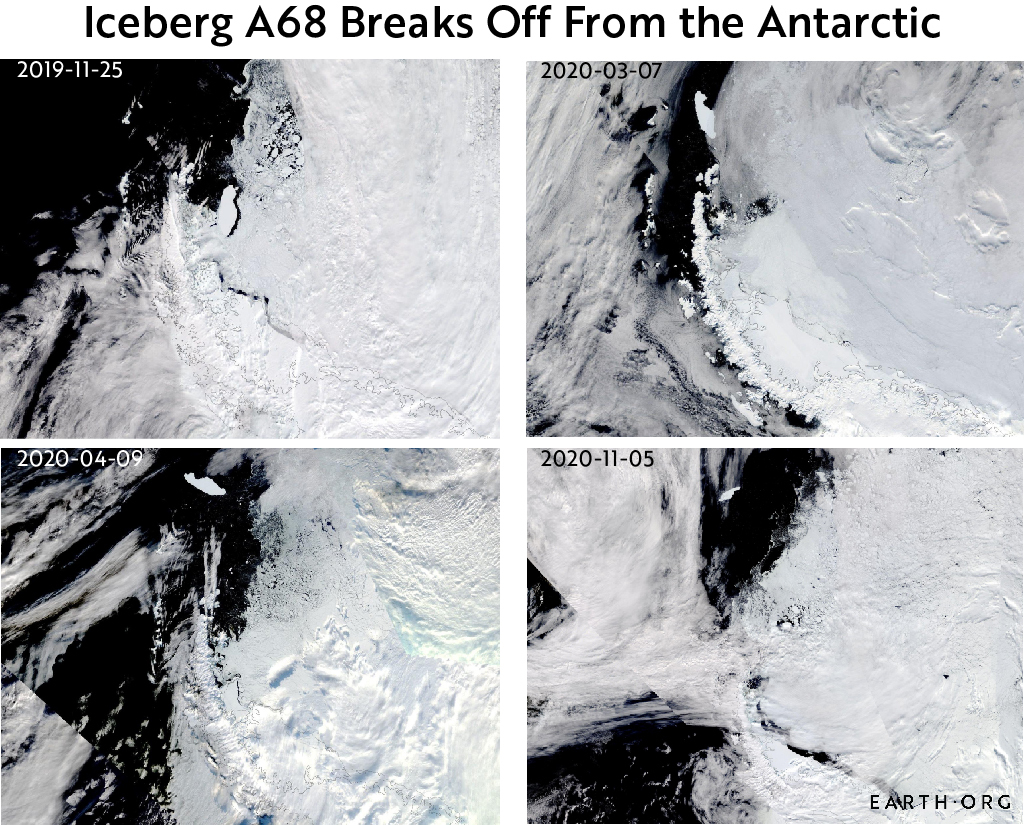 If the iceberg grounds itself on South Georgia, animals’ normal foraging routes could be blocked, preventing them from feeding their young properly, and creatures living on the seafloor would be crushed where A68a touched down, which would take a long time to reverse.

Professor Geraint Tarling from the British Antarctic Survey (BAS), says, “Ecosystems can and will bounce back of course, but there’s a danger here that if this iceberg gets stuck, it could be there for 10 years. And that would make a very big difference, not just to the ecosystem of South Georgia but its economy as well.”

He continues, “A close-in iceberg has massive implications for where land-based predators might be able to forage. When you’re talking about penguins and seals during the period that’s really crucial to them – during pup- and chick-rearing – the actual distance they have to travel to find food (fish and krill) really matters. If they have to do a big detour, it means they’re not going to get back to their young in time to prevent them starving to death in the interim.”

The A38 iceberg grounded at South Georgia in 2004, leading to countless dead penguin chicks and seal pups being discovered on local beaches.

However, the impacts of a potential iceberg-island collision are not all bad, according to Tarling. Icebergs bring with them enormous quantities of dust that will fertilise the ocean plankton around them, and this benefit will then make its way up the food chain.

Tarling’s colleague, Dr Andrew Fleming, says, “A68a is spectacular. The idea that it is still in one large piece is actually remarkable, particularly given the huge fractures you see running through it in the radar imagery. I’d fully expected it to have broken apart by now.”

He continues, “If it spins around South Georgia and heads on northwards, it should start breaking up. It will very quickly get into warmer waters, and wave action especially will start killing it off.”