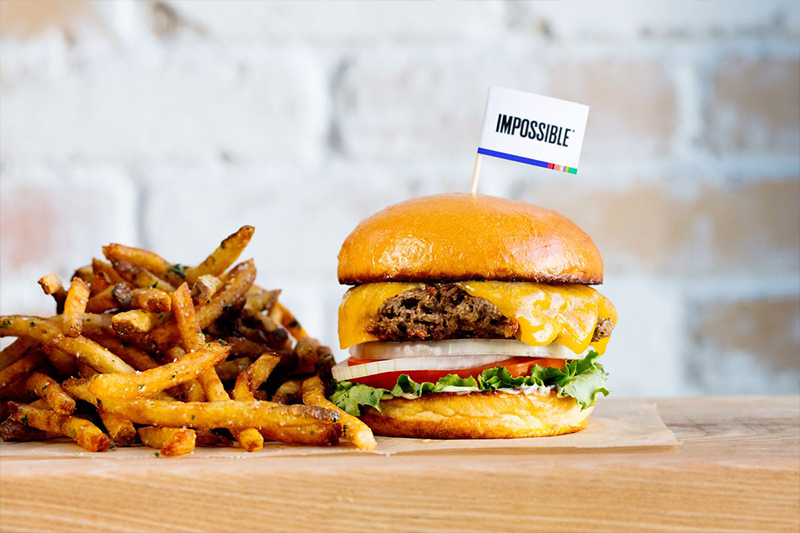 “I’ll admit that veggie burgers haven’t always tasted great, but eating a meat substitute just once or twice a week will cut down on the emissions you’re responsible for,” says Bill Gates in his recent bestseller, How to Avoid a Climate Disaster. Gates suggests consuming less livestock as one major action individuals can take to help avoid climate disaster. Animal agriculture contributes to at least 14.5% of the worldwide greenhouse gases emissions. The impacts of climate change will be catastrophic if we do not bring global carbon emissions down to net-zero, and meat substitutes can play an important role in reducing the carbon footprint of the agriculture sector. However, could plant-based meat like Impossible Foods be fundamentally healthy for Hong Kong consumers and the environment? 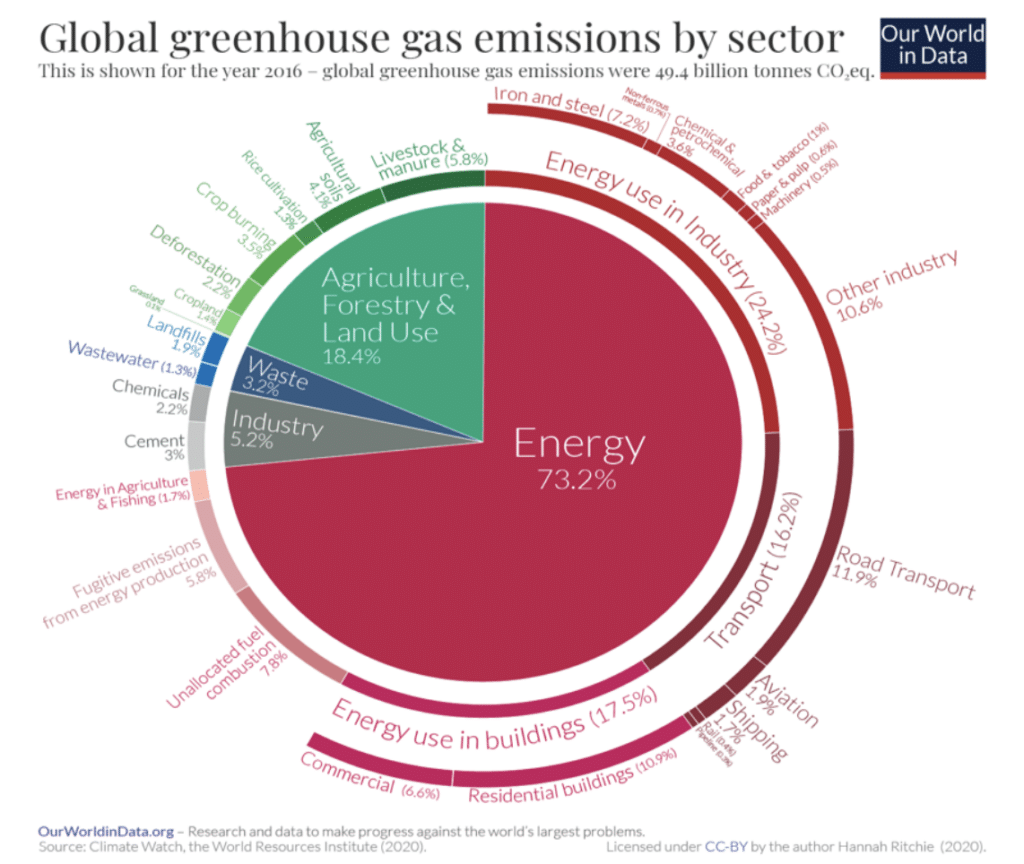 Table 1 – Sector by sector: where do global greenhouse gas emissions come from? Our World in Data; 2020.

What is Impossible Foods?

Impossible Foods, also known as Impossible, is one of the world’s leading plant-based food and meat providers. The company employs advanced biotechnology to create nutritious food from plants, and was one of the first to accurately replace meat products. Eminent scientists and chefs were hired to recreate the sensory experiences of real meat and precisely determined how plant based meat should be cooked, tasted and handled in production.

Impossible is targeting planet-based and vegan markets, but is also aiming to eradicate the negative health impacts from digesting real meat, and to limit the impacts of livestock products on ecosystems.

The Impossible Burger generates 89% fewer greenhouse gases, and 87% less water than a traditional burger. Impossible has received financial backing from Google Ventures, The Union Bank of Switzerland, Bill Gates and 43 other investors with a sum of USD $1.4B funding for the firm.

However, haematologist – Dr. Shireen Kassam from King’s College Hospital has criticised plant-based meat products, condemning them as ‘ultra-processed junk food,’ with ‘too much sodium,’ which can lead to health conditions including stroke, and high blood pressure. What’s more, the anti-GMO community and anti-GMO Center for Food Safety have crusaded against Impossible for adopting GMO soybeans, as GMO soy has huge amounts of herbicide glyphosate that is proven to be the cradle of cancer after digesting.

Currently, there are roughly 200 retail stores and 170 restaurants in Hong Kong where Impossible Foods products are readily available for purchasing and ordering, and commuters see daily Impossible Foods advertisements in MTR stations. Impossible Burgers, in particularly,  have been incredibly popular. However, we should delve into the underlying drawbacks and potentials of Impossible before it becomes mainstream, right?

The aforementioned health issues related to Impossible notwithstanding, there is more bad news: Impossible products are heavily processed and therefore, high in saturated fat. To reduce chances of suffering from heart disease, the American Heart Association suggests lowering our saturated fats’ intake to no more than 5-6% of our daily calories. To elucidate, Hong Kong people are suggested to absorb 1588 calories a day, which indicates no more than 95.28 calories should come from saturated fat.

Conversely, Impossible meat is among the meat substitutes with the highest saturated fat per 4oz according to a health research conducted in Harvard. Thus, if a consumer is very busy with workload or school work, and lacks regular cardiovascular exercise, meatless burgers should not be included in their daily diet.

But why? For a simple calculation, 8oz of meat is normally cooked per burger or found in an Impossible patties package, which is equivalent to a 8g of saturated fat* 2 = 16 grams of saturated fat just for one meal. By exceeding the recommended daily intake frequency, it might possibly give rise to smaller ventricles, poorer heart function and stiffer arteries and more.

Table 3 – Harvard Health Publishing: Impossible and Beyond: How healthy are these meatless burgers? G, Emily; 2019.

What Is So Special About Impossible Foods?

Nonetheless, this is not the whole picture, Impossible products in particular are very rich in protein, vitamins and minerals. Derived from the root of soy plants, heme, also known as soy leghaemoglobin, was created to make Impossible meat taste exceptionally similar to normal beef. Heme is utilised as colour and flavour addictive, which allow Impossible’s meatless meat to taste and ‘bleed’ exactly like red meat.

To put it simply, Impossible meat contains approximately 19grams of protein while containing zero cholesterol. Too much cholesterol in our diet can lead to blocked blood vessels and be a breeding ground for stroke and heart problems.

Significantly, Impossible products also contain nutrients such as vitamin B12 and zinc amounts equivalent to or greater than those found in red meat and poultry. This would be ideal for vegetarians since barely relying on their normal diets from plants, vegetarians would find it much harder to receive the same amount of nutrients needed. 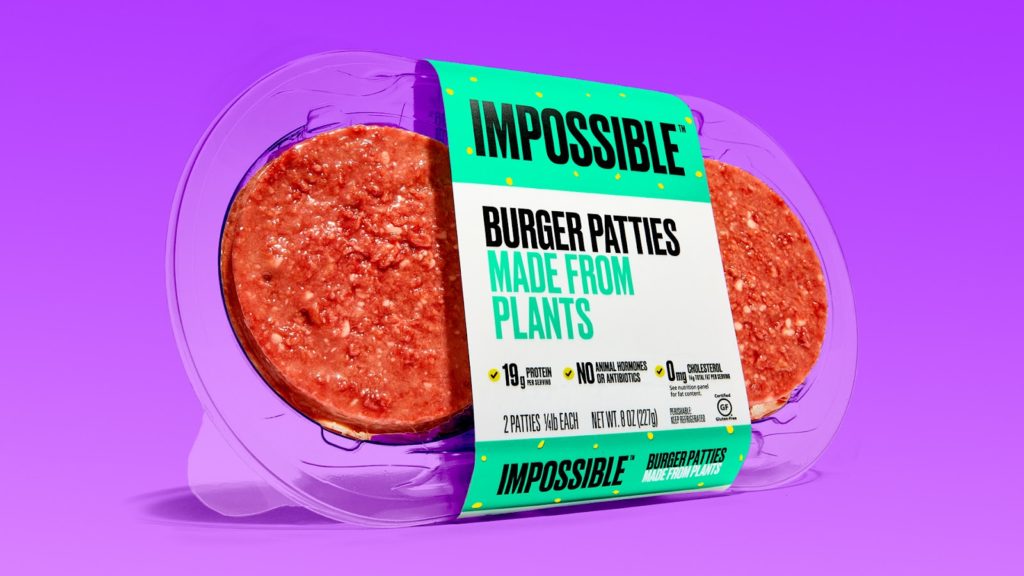 Although plant-based meat invented by Impossible relies on GMO soy, industrial farming processes including tillage and use of agriculture chemicals can devastate fertile soil and cause it to secrete stored carbon. “Approximately 30% of the one trillion tons of atmospheric carbon originated from destruction of soil,” according to Dr. Mark Hyman in his book “Food Fix: How to Save Our Health, Our Economy, Our Environment, and our Communities.”

Despite the environmental impact of soybean farming, Impossible products have a substantially lower carbon footprint than an equivalent beef burger. An Impossible burger accounts for 15 times fewer GHG emissions, 50 times less fresh water usage and about 18 times less land use. To this end, an estimated 32% of worldwide carbon emission that comes from livestock can be drastically decreased; whereas one-third of fresh water that is supposed to be used for animal production can be used elsewhere, for instance – solving the water scarcity crisis in Qatar.

Ideally, the environmental impacts from livestock can only be reduced when more people consume plant-based meat instead of red meat. Since only when the demand of meat drops, suppliers will then slaughter fewer poultry. A study conducted by University of Oxford has proclaimed that when all people diverting from red meat to plant based meat, approximately three quarters of food-related emissions can be brought down, along with the acidifying and eutrophying emissions that could degrade terrestrial and aquatic ecosystems.

Most food in Hong Kong is imported from abroad, and in particular red meat products are responsible for 57% of individual carbon footprints for people in daily Hong Kong’s imports. In 2017, Brazil supplied 30% of Hong Kong’s red meat products, followed by the US with roughly 20% and 5% coming from Australia.

While it might sound fantastic that our Free Trade Agreement allows us to eliminate tariffs, and give Hongkongers access to so many superior meat choices from countries such as Brazil. But all these comforts make it easy to ignore that we are perpetrating the Amazon’s deforestation, as we make up for a quarter of 1.64 million tonnes of beef shipping from Brazil according to the Brazil’s Secretariat of Foreign Trade.

Transitioning to a plant-based meat diet may not 100% make us healthier, but it is undeniable that opting for Impossible meat can clamp down on deforestation and global emissions. Since the production of beef-less alternatives has been proven to significantly reduce the use of freshwater, land and GHG emissions, Impossible would be one of the brands that could safeguard our ecosystems from climate change disruption.

With Impossible Foods announcing a 26% reduction in retail prices in Hong Kong, why not go ahead and give it a try next time when you decide to eat meat!