Indonesia has issued a much-anticipated decree to boost the protection of Indonesian deckhands working aboard foreign commercial and fishing vessels. Former migrant deckhands have previously described conditions in which they experienced overwork, withholding of wages, debt bondage, and physical and sexual violence. The decree was supposed to have been issued in March, but was held up for want of signatures; it was finally issued this month ahead of a lawsuit against the government over the delay. Marine activists have welcomed the decree, which they say should help improve the global fisheries sector, given that vessels where worker abuse is rife also tend to be engaged in illegal fishing activities.

Indonesia has issued a much-anticipated decree to boost the protection of Indonesian deckhands working aboard foreign commercial and fishing vessels.

The move comes in response to a pending lawsuit accusing the government of failing to enshrine protections that could have prevented a long history of abusive and even deadly treatment of these sailors.

The government says the regulation ratified on June 8 by the administration of President Joko Widodo is designed to streamline the recruitment and placement process of Indonesian migrant deckhands, and improve measures to protect their labor rights. The government decree, a derivative of the country’s 2017 law on migrant worker protection, is applicable to foreign commercial and fishing vessels, including distant-water boats.

A key change introduced in the new regulation includes having the Ministry of Manpower as the official authority to produce the permit for recruitment agencies to assign candidate migrant workers. Previously, the Ministry of Transportation could also issue a similar permit. Many observers have called out the overlapping authorities for undermining legal protections for the migrant deckhands.

“Hopefully this will help us decrease and minimise the problems faced by Indonesian migrant workers, specifically migrant commercial boat crews and migrant fishing boat crews,” said Suhartono, the director-general of labor placement at the Ministry of Manpower. 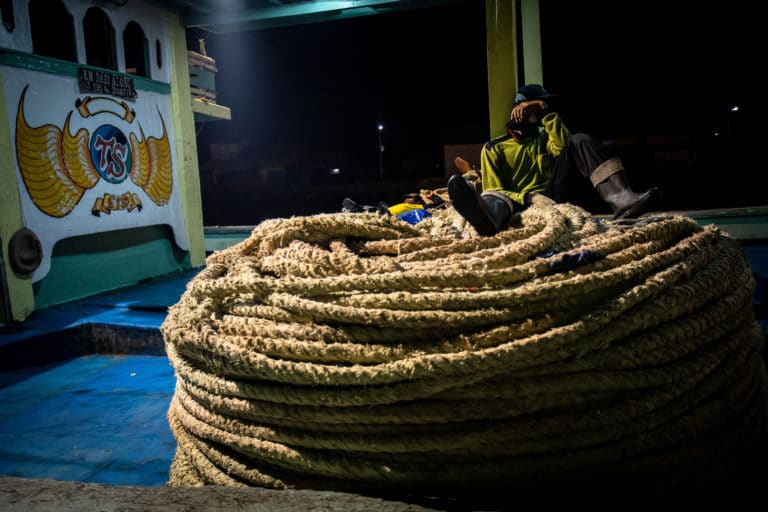 The new regulation also includes working scheme and condition standards based on a global convention on work in fishing by the United Nations’ International Labour Organization, known as ILO C-188; the introduction of collective bargaining agreements for migrant workers; and establishing an integrated database on migrant workers between related government agencies.

“Having integrated data will be very beneficial for all related government institutions in protecting Indonesian migrant fishing and sea workers, particularly in handling public complaints,” Fadilla Octaviani, the director of law enforcement and access to justice at the Indonesia Ocean Justice Initiative (IOJI), a Jakarta-based think tank, said in a press release.

The issuance of the new regulation comes in the wake of a lawsuit filed May 31 by three former migrant deckhands against the government for not ratifying it by 2019, as required under the 2017 migrant worker law. The draft for the new decree had been stuck in limbo, with a government official saying it was still awaiting signatures from multiple ministries before it could be sent to the president.

“I’m certainly glad that the government regulation on the placement and protection of boat crews has been ratified,” Pukaldi Sassuanto, one of the plaintiffs in the lawsuit, said in a statement. “This means that my and my friends’ fight didn’t go in vain.”

The trio are expected to have a court hearing on June 15, when they plan to withdraw their lawsuit. 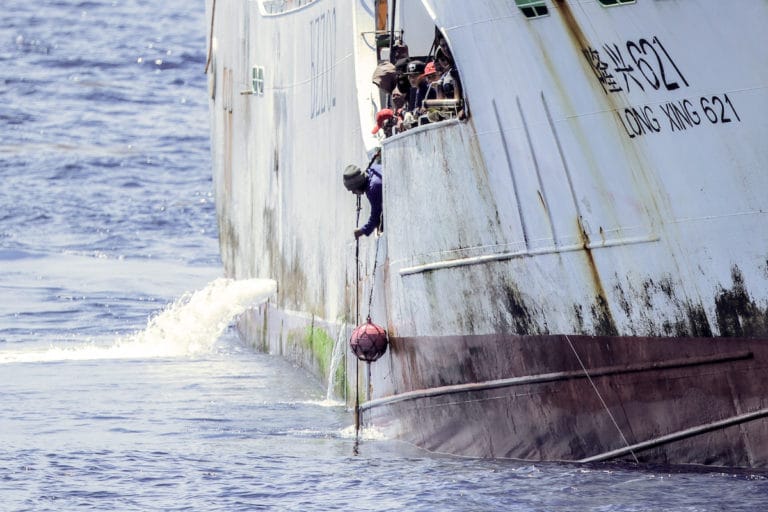 Migrant fishers haul a shark aboard the Long Xing 621 vessel in the mid-Atlantic in September 2021. Image by Tommy Trenchard for Greenpeace.

Marine activists have welcomed the issuance of the government regulation, which they say should help improve the global fisheries sector. They note that forced labor on board fishing vessels often goes hand in hand with illegal fishing. With coastal fisheries being depleted due to overfishing, vessels are heading farther out into open waters and high seas, in turn racking up higher operating costs. Companies look for cheap labor to reduce costs and stay profitable — and much of that cheap labor comes from Southeast Asia.

Former migrant deckhands from Indonesia have previously described dire and even deadly working conditions on board foreign vessels, including overwork, withholding of wages, debt bondage, and physical and sexual violence. These conditions eventually forced them to cut short their working contracts, which typically run about two years, and forfeit the deposits they were typically required to pay to get the jobs.

“This government regulation becomes a significant win for our campaign to push Indonesia and other countries within the global fisheries business chain to move toward ending the practice of slavery at sea, and to support fisheries management that’s responsible socially and environmentally,” Afdillah, oceans campaigner at Greenpeace, said in a statement.