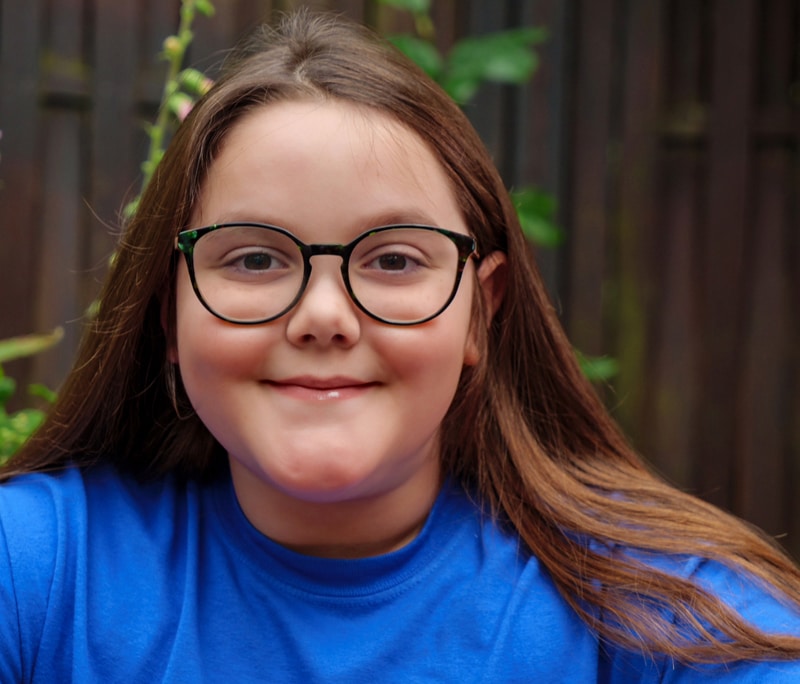 Lilly Platt is an international environmental champion. At 12, Lilly has achieved more than the average adult and has established herself as one of the world’s largest environmentalists. Lilly started ‘Lilly’s Plastic Pickup’ at the age of 7 after seeing the astonishing amount of plastic on a walk with her grandfather one day. After looking up the dangers of plastic, Lilly decided that it was time to take action herself. One of Lilly’s goals is to inform the world, including global politicians and policymakers, about the harmful effects of climate change and plastic pollution.

She has received several awards for her environmental work, including a “Lijntje” award for Outstanding Achievement and an International Eco Hero Award, and she is to be presented with the Children’s Rights Award.

Lilly Platt was recently honoured by the President of Egypt at the World Youth Forum, which took place last December and she participated in a panel alongside Dr. Jane Goodall. She has also been invited by the Vatican to meet with the Pope later this year.

We are proud to announce that Lilly Platt is our first Global Youth Ambassador! We are excited to have such an inspiring individual as a part of our platform and we have no doubt that she will continue to be a leader in raising awareness about the plastic pollution crisis.

Earth.Org recently talked with Lilly to get to know her a bit more, and chat about her climate work, the challenges she has faced, and who inspires her.

Earth.Org: Can you tell us a little bit about yourself, Lilly?

Lilly Platt: I’m 12 years old and I live in the Netherlands. Some of my hobbies include spreading awareness about the environment, drawing, spending time with my pug, Mochi, and of course, picking up plastic.

EO: What started your journey of activism for the planet? How old were you and what started it?

Lilly: Back in 2014, when I was 6 years old, me and my grandfather were walking and we saw piles of plastic that had been thrown everywhere: on the roads on the grass- so we decided it would be a good idea to count the pieces of plastic and after at least 10/15 minutes of walking, we found 91 pieces of plastic. I was shocked! I found out that it would eventually make its way into the ocean and become part of the “plastic soup” and it was at that moment that I realised that I had to do something about it.

I think that people think that when they throw bits of rubbish out their car windows or on the ground, that it disappears and that we don’t have to worry about it anymore, but actually, that’s when it gets worse because the cycle of microplastics begins.

EO: Was your interest in the environment something that your parents taught you from when you were very young or did you develop it by yourself?

Lilly Platt: My family have always been aware of the importance of the planet, and my grandfather grew up in a village in Cornwall, so he has always been close to the coast and has always had a close connection to nature and he passed that down to me. 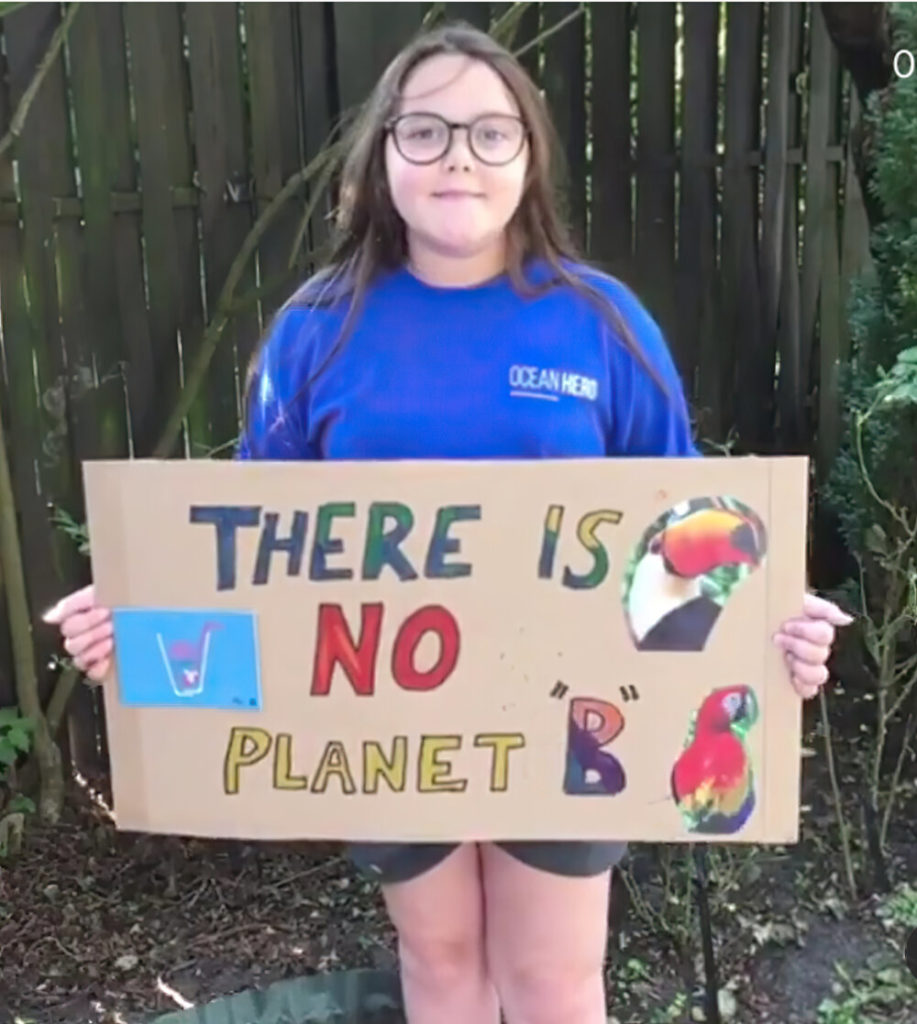 EO: What are some activities that you like doing for the planet?

Lilly: I still do plastic pick-ups but with the virus, I take extra precautions such as always using gloves and grabber sticks. After we finish the pick-ups every Sunday, we sort the rubbish out into columns and groups so cans go with cans, bottles with bottles, etc, and then my grandpa and I take pictures of what we’ve collected and post it on social media so that people can see what I’ve picked up each week. At the end of the year, we count how much plastic we have collected, and it’s an explosive number!

We found more than 22 000 pieces of plastic! A data scientist looked at our audit and wrote up a report, where he put the rubbish into categories, like cigarette packets, drinking cans and candy wrappers.

I also do the school striking, although that is online now. Sometimes, a few school strikers from around the world have a zoom meeting and every Friday, we post a picture of a school striking sign or make a positive video about what we can do for the planet while in quarantine and things like that. Since 2018, I’ve done more than 100 strikes!

EO: Congratulations, Lilly! What do you think the biggest issues facing the planet are (besides the plastic problem)?

Lilly Platt: I think that all environment problems are connected in a way. Plastic needs fossil fuels to be created and fossil fuels put a lot of CO2 into the atmosphere, thus linking plastic pollution and climate change together and creating a cluster of disastrous environmental problems. Another problem that I think is quite severe is that politicians and other people in high places don’t listen to those who actually do something for the planet. Once, me and a couple of other school strikers from across Europe went to the European parliament in Strasbourg to have climate debates for two days. The second day was a big disappointment because there was this room with at least 751 seats and only 27 showed up. Only 3 said something good about what we were doing or said something helpful for climate change, which was such a big disappointment. One of the three politicians, Bas Eickhout, a Dutch politician, said something that I will always remember. He said that if climate change was a bank, it would’ve been saved by now. I think we should do everything in our power to solve environmental problems.

EO: What challenges have you encountered while doing your activist work?

Lilly: I have received so many comments saying things like “she’s just a child, let the grown-ups handle this,” or “this is fake news, how dare you do something like this?” My mum always checks my messages so that I don’t get discouraged or feel negative about what I’m doing. Another negative comment happened during one of my school strikes; there was a lady on a motorbike who read one of my school striking signs out loud and after parking, told me I was doing something illegal and I was going to get a fine. I heard that when she was younger, she got in trouble for striking about animal protection and she lost her connection to nature. Throughout history, humanity has lost its green heart but I believe that children still have theirs. All they have to do is share it with the world.

EO: What do your friends and family think about what you’re doing?

Lilly: My family is 100 and infinity percent supportive of what I do and they always help me with my projects!

At my previous school, my schoolmates didn’t really think much of what I did and made some negative comments, until my teacher showed them one of my videos and they were a bit starstruck haha!

Lilly’s Mum: It’s difficult to do the school strikes: they have a law in the Netherlands called the Compulsory Education Act or ‘Leerplicht’ Act and so we had to get permission to take Lilly out of school to do these strikes. If you do a lot of sports in the Netherlands, they are generally very supportive, but when you talk about environmental things, then you get “oh, she’s a hippie” comments. Lilly has unfortunately had a bit of a hard time in a couple of schools, but she’s done some amazing things: she’s been asked to speak in Egypt by the president, we’ve been to Vancouver and in Italy at the Youth Mundus Festival, she moderated an amazing panel for Amazon Watch with Amazon leaders, who came especially to see her. She’s even had people like Jane Goodall write to her and compliment her on her work! Unfortunately, because she’s not doing a sport, a lot of what she does gets discredited, but she never loses her positive attitude. She knows that what she’s doing is a good thing so we are always behind her and always letting her know her value. She has a lot of very good friends around her who do the same environmental work and they all support each other. There’s a lot of people that say that their work is a “parent initiative” and don’t believe that it can come from the heart of a child.

The headmaster of her new school saw her TED Talk and he wants her to make a program about plastic and recycling, so this will be a very good move.

EO: What are some things that you in your personal life try to do to decrease your carbon footprint?

Lilly: We often walk to places and use public transport. We don’t use single-use plastic anymore, so we always use alternatives such as tin cups and bamboo straws and the spork! And of course we pick up plastic every single day; no matter what, we never stop!

Lilly Platt: David Attenborough, Jane Goodall, and of course my grandpa because he is the living tree of knowledge and he has taught me so much about wildlife and what we have to do to protect the planet. I remember when i was at least four years old, whenever David Attenborough was announcing a new documentary and it was on the TV. I just remember my eyes being glued to the screen and trying to listen to every single word he was saying about a new fish that was discovered or about the depths humanity could reach in the ocean or this certain bugs mating dance, stuff like that, i just wanted to know everything about it.

EO: What is your advice for other young activists?

Lilly: I would definitely say to never listen to the word “no” because your voice is the most powerful thing on this planet and nothing can stop you if you have the will to believe and remember to always listen to your green heart.

EO: What is one thing that you wish your government would do to help the planet?

Lilly: I would really like for climate change and the environment to be taught in schools. If you teach children this from Day 1, you can build a generation that cares for the environment. Information, education and inspiration are incredibly important things if you want other people to believe that this planet is important and that we need to save it.

EO: Finally, where is the first place you want to visit when it is safe again?

Lilly: I would love to go anywhere in Asia because I’ve studied everything- the culture, history and food- and I’ve heard that it is an incredibly nice and polite place.