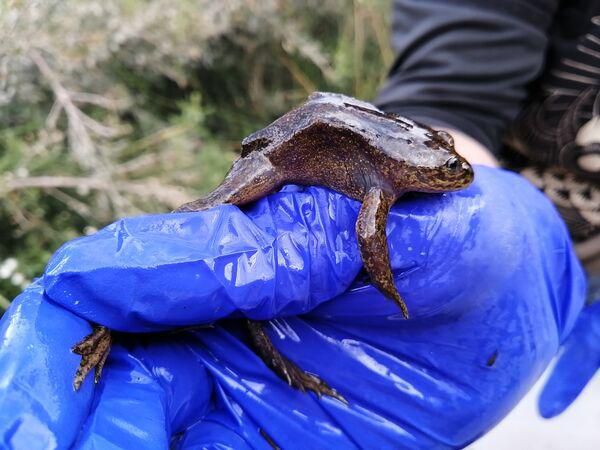 In late October, nearly 200 Loa water frog tadpoles hatched at the National Zoo of Chile, a little more than a year after a team of conservationists in Chile evacuated the last-known 14 frogs from dry habitats and brought them to the zoo. This offers a glimmer of hope for the critically endangered frog.

In June 2019, herpetologist Andrés Charrier discovered that the only known stream home to the Loa water frog (Telmatobius dankoi) had dried up as a result of extraction of water for mining, agriculture and real estate development. In a small muddy pool, scientists discovered 14 malnourished and dehydrated individuals. With the help of the Chilean government, the 14 frogs were airlifted to the National Zoo of Chile in the capital, Santiago. The hope was to begin a conservation breeding programme, but first the scientists needed to stabilise the remaining individuals. “When we brought these animals to the zoo, I didn’t even know if they were going to survive the transfer from Calama on the plane to Santiago,” said Charrier. Zoo staff were able to save 12 of the 14 individuals.

The rehabilitation of the rescued individuals was the first objective of the conservation effort. The second objective was the successful reproduction and the hatching of the tadpoles, which has now also been accomplished. Yet the final objective, reintroducing the species back into their natural habitat, may prove to be the most challenging.

The city of Calama is located in the middle of the Atacama desert. In the driest non-polar desert on Earth, water is a scarce and precious resource. Calama is considered the mining capital of Chile. Various industrial processes led to the contamination and shrinking of the only stream the Loa water frog is known to inhabit. It is against these threats that conservationists have to contend if they hope to accomplish their third objective. Sadly, these threats are not unique to the Loa water frog, and it is believed that many species of water frog are threatened by human activities.

There are 63 species of water frog found in South America, with about 10 species in Chile. Many species of water frogs (including the Loa water frog) are micro-endemic, meaning they are only found in a small region. Water frogs are either semi-aquatic or entirely aquatic, making them incredibly sensitive to changes in their environment and particularly vulnerable to climate change. Habitat destruction, invasive trout species, disease and pollution are also threatening South America’s water frogs.

The achievements of the team involved in the rescue, rehabilitation and reproduction of the frogs is no small feat, as no one is known to have attempted to care for the species before. It is almost certain that without intervention, the species would have become extinct. It is important to celebrate the success of this conservation effort, but it is also a stark reminder of the impact humanity is having on all areas of the natural world.

The Loa water frog is considered critically endangered by the IUCN Red List of Threatened Species and was once found only in a single stream in Chile. Experts say there may be between five and eight individuals still living in the wild. Returning the species to the wild someday will require identifying a safe home for the frogs and protecting that habitat from the threat of illegal water extraction and habitat destruction.