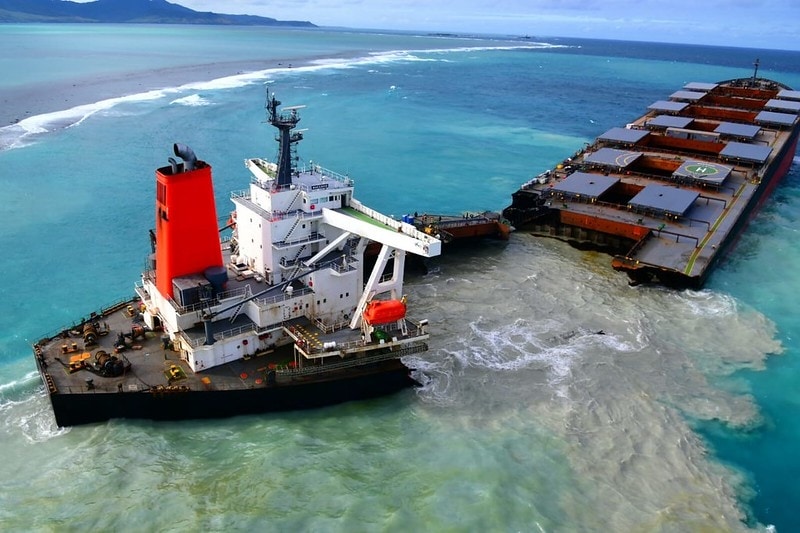 On the morning of Aug.15, a wrecked ship, longer than the Titanic, broke in two in the waters of Mauritius. The Japanese-owned bulk carrier, M.V. Wakashio, had rammed into the island nation’s coral reef barrier on July 25. In the weeks since the crash, it leaked almost 1,000 tonnes of fuel oil into the sea. Mauritius has since chosen to dump the bits of wrecked ship off its coastline, prompting controversy.

Oil-laden waves crashed on the shore, and greasy residue settled on coral reefs and slunk into the mangrove forests that clutch the eastern coast of the island. At least 30 kilometers (19 miles) of shoreline is heavily affected.

The country is still trying to mop up the oil, but another problem now looms large: what to do with the broken halves of the ship? This week the government of Mauritius floated the idea of sinking the wrecked ship 13 km (8 mi) off the east coast, in open waters 2,000 meters (6,600 feet) deep. On Aug. 17, two tugs started this operation.

The move has proved controversial.

“Out of all available options, the Mauritian government is choosing the worst one,” Happy Khambule, Greenpeace Africa senior climate and energy campaign manager, said in a statement. “Sinking this vessel would risk biodiversity and contaminate the ocean with large quantities of heavy metal toxins, threatening other areas as well, notably the French island of La Réunion.”

The French minister for overseas departments, Sébastien Lecornu, who visited Mauritius on Aug. 16, also appeared unimpressed with the plan. Sinking part of the ship in international waters “is clearly not our preferred solution,” he said at a press conference on the same day. According to reports from the National Crisis Committee, which is spearheading Mauritius’s efforts, the plan to sink the bow was validated by experts sent by France.

The plan has also run into logistical challenges. The salvage tugs that are pulling the wreck are sailing under the Maltese flag. The island nation is a party to the London Convention on marine dumping; sinking the bow in open waters would violate the treaty. 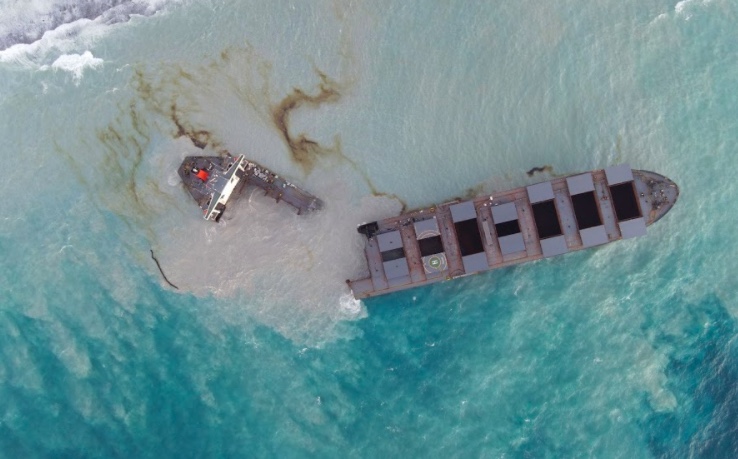 An investigation is underway into the cause of the ship’s grounding. Mauritian authorities took the captain and his deputy into custody, charging them on Aug. 18 with endangering safe navigation.

Mauritian authorities are already facing heat for their handling of the crisis. The ship grounded in the vicinity of three ecologically sensitive areas: Blue Bay Marine Park, Ile aux Aigrettes, a coral island, and the Pointe D’Esny wetland, which is a Ramsar Convention-protected site.

The government’s response has been criticized as tardy. “You have a ship with 3.8K tons of oil wrecked less than a mile from your beach … close to your national marine park [Blue Bay],” wrote a Facebook user, the Logical Mauritian. “You are an island that survives on your tourism and your beaches are the lifeblood of your tourism industry. You had that ship wrecked near your lagoon for 12 days … And it is obviously clear its spilling oil in your water. What have you been doing for 12 days?”

The vessel, owned by Japanese company Nagashiki Shipping, was carrying 3,800 tons of fuel oil. The Mauritian government, with international help, pumped out most of the remaining oil from the ship before it broke apart.

In the immediate aftermath of the oil spill, local communities appeared to be taking the lead in cleanup efforts. Fishers, fishmongers, boat operators, and volunteers from civil society organizations have been working to remove the oily sludge, solid waste and contaminated debris washing up on the shore.

More than 10 km (6 mi) of oil booms, floating barriers made from PVC that prevent the oil slick from spreading, were deployed by the authorities. In addition, makeshift booms were made from human hair, sugarcane straw packed into sacks, and leggings, all to help soak up the oil.

Almost 900 tons of oily sludge, oil mixed with debris, has been recovered from 14 sites.

As experts have flown in from around the world, including France, Japan and India, the nature of the response has shifted away from volunteer activities. Mokshanand Sunil Dowarkasing, a former legislator and Greenpeace Africa consultant, described the response as “haphazard,” and said he was not convinced that the onsite presence of more than 100 experts from several countries would solve the problem. “There’s so much to be done; I don’t expect these people to be doing it alone. They cannot succeed in doing it alone,” he said.

A cleanup and restoration effort led by French company Le Floch Depollution, which was engaged by Protection and Indemnity Club (P&I), the insurer for Nagashiki Shipping, is also taking shape. They are expected to seek the help of locals.

Environmentalists say they’re worried such plans will be limited to scooping the oil from the sea, a cosmetic cleanup that will not account for the true impact of the spill on fragile marine ecosystems. “I fear that they will do a cleanup for two to three months and then say goodbye,” said Vikash Tatayah, director of conservation at the Mauritian Wildlife Foundation (MWF). “What about the long-term impacts on marine life, on tourism on fisheries?”

Tourism is a mainstay of the Mauritian economy, contributing around 10% to the country’s economy and employing a quarter of the workforce. Thousands of people rely on fishing on the island nation.

The oil spill could also set back long-standing conservation efforts. Coral reefs are unique habitats brimming with fishes and myriad other marine life-forms. At the time of the spill, the corals and the fish life in the region were rebounding after coral sand mining was banned in Mauritius in 2001.

The MWF works on Ile aux Aigrettes, a coral island just north of the crash site. “It took MWF 36 years and over 300,000 plants to create such unique coastal forest,” Tatayah said in a Facebook post. He said he’s worried that contaminated underground water could kill the endemic plant species on the island.

There are also concerns that dumping sections of the wrecked ship in open waters could impact the whale pods that swarm the waters of Mauritius and neighboring La Réunion on their migration north from the frigid Antarctic waters during the southern winter. But experts like Nadeem Nazurally at the University of Mauritius disagree that sinking the bow will cause any lasting damage since it is not believed to have any toxic material in it.

He said he’s more worried about the coral reefs that he’s been studying for more than 20 years. Coral bleaching has periodically affected the reefs encircling Mauritius but some have fared better than others. “The corals of Pointe d’Ensy are more resistant to the effects of warming waters, they are sturdier,” said Nazurally, who is involved in coral farming in the area. He is currently unable to visit his field sites and said he fears the oily slime may be settling on the precious corals. The slimy layer can smother the corals and lead to an expulsion of zooxanthellae, the symbiotic microorganisms that live in the corals, and eventually bleaching.

By the 1990s, Mauritius had lost much of its original mangrove cover. Since 1995, restoration efforts have gathered steam, with more than 400,000 saplings planted across the island. These saltwater-adapted tree species play a crucial role in protecting the coastline, recycling nutrients, sequestering carbon, and acting as nurseries for marine species. The government estimates that 70% of the country’s commercially important fish species rely on mangroves when they are juveniles. It’s not yet known whether mangrove saplings will survive the damage from the oil spill.

The impacts of the oil spill on these important ecosystems will have to be closely monitored, and restoration may happen over months if not years, experts say. “There is still a long way to go. It’s only the beginning of a long cleaning and decontamination process,” Tatayah said.