Turtles and Tortoises in Trouble: More Than Half of All Species Face Extinction 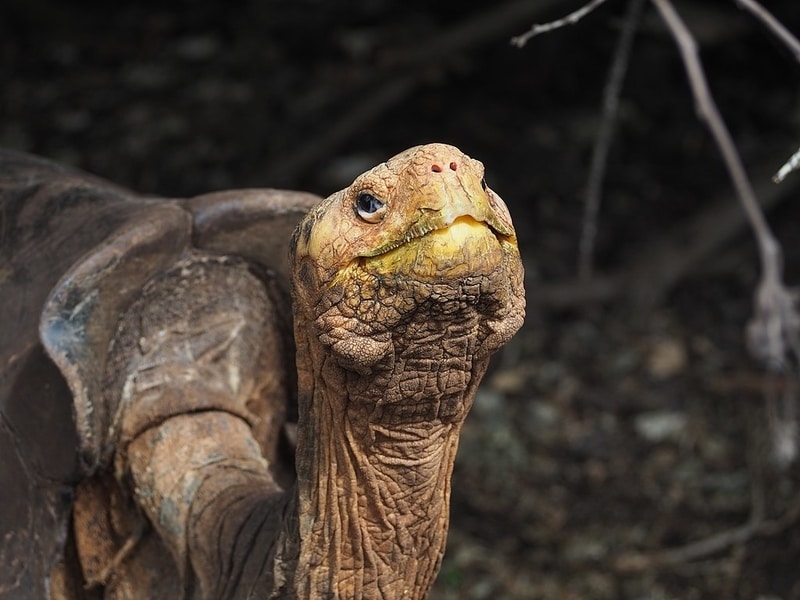 A new paper has found that more than half of the planet’s turtle and tortoise species are threatened with extinction. While the paper offers recommendations to reverse this trend, the threats facing these iconic animals- including the climate crisis and loss of habitat- are far-reaching and difficult to overcome.

Turtles and Tortoises in Trouble

On the island of Madagascar, locked gates, razor-wire fences, and 24-hour armed guards protect one of the world’s rarest treasures. That treasure, worth roughly $50,000 each on the black market, is the last wild population of the critically endangered ploughshare tortoise, the rarest tortoise on the planet.

The ploughshare tortoise (Astrochelys yniphora) is emblematic of a growing crisis: more than half of the world’s turtle and tortoise species are now threatened with extinction.

A group of 51 global turtle and tortoise experts has published a new paper in Current Biology on the extinction risks for these iconic animals. Threats include the pet trade, overconsumption for food and medicine, loss of habitat, pollution, invasive species, and climate change. The group also offers recommendations to reverse the decline.

Of the 360 known turtle and tortoise species, 187 are threatened, according to the IUCN Red List criteria. Of these, 127 are endangered or critically endangered. Many could go extinct this century.

“It is overwhelming when it’s all put together,” said Kristin Berry, a U.S. Geological Survey (USGS) wildlife biologist and co-author of the paper who has studied tortoises for more than 40 years.

Why Are Turtle and Tortoise Species at Risk of Extinction?

Turtles and tortoises grow slowly, mature late, and live a long time. This slow and steady lifestyle strategy has served them well for millions of years, but now, in the face of modern pressures, it can be a big liability.

Young turtles are highly vulnerable to many different predators, and only a small percentage survive into adulthood. Turtles that do survive may live a long time (some up to 200 years). Most females lay eggs well into their final years. This lifetime of egg-laying ensures that enough hatchlings will survive to keep the population afloat.

Removing an adult female turtle from the wild also removes the hundreds to thousands of eggs it might have laid during its lifetime. If enough of them disappear, the population collapses. And once depleted, turtles and tortoise populations are very slow to recover, if they recover at all.

In May 2020, Mexican authorities confiscated more than 15,000 freshwater turtles illegally bound for the pet trade in China. Though this was the largest confiscation of turtles ever reported, the story is not a new one.

In southern Madagascar, agents rescued almost 11,000 critically endangered radiated tortoises (Astrochelys radiata) from a house in 2018. The same year, researchers found 65 different tortoise and freshwater turtle species for sale in markets in Jakarta, Indonesia and nearly half of these were threatened with extinction.

For the world’s 25 most endangered tortoises and freshwater turtles, trade exploitation is the largest threat. International trade in turtles and tortoises is most common in East Asia. Legal and illegal trade networks coming primarily out of North America, Europe and Africa supply markets with turtles and tortoises for use in food and traditional medicine and as pets. 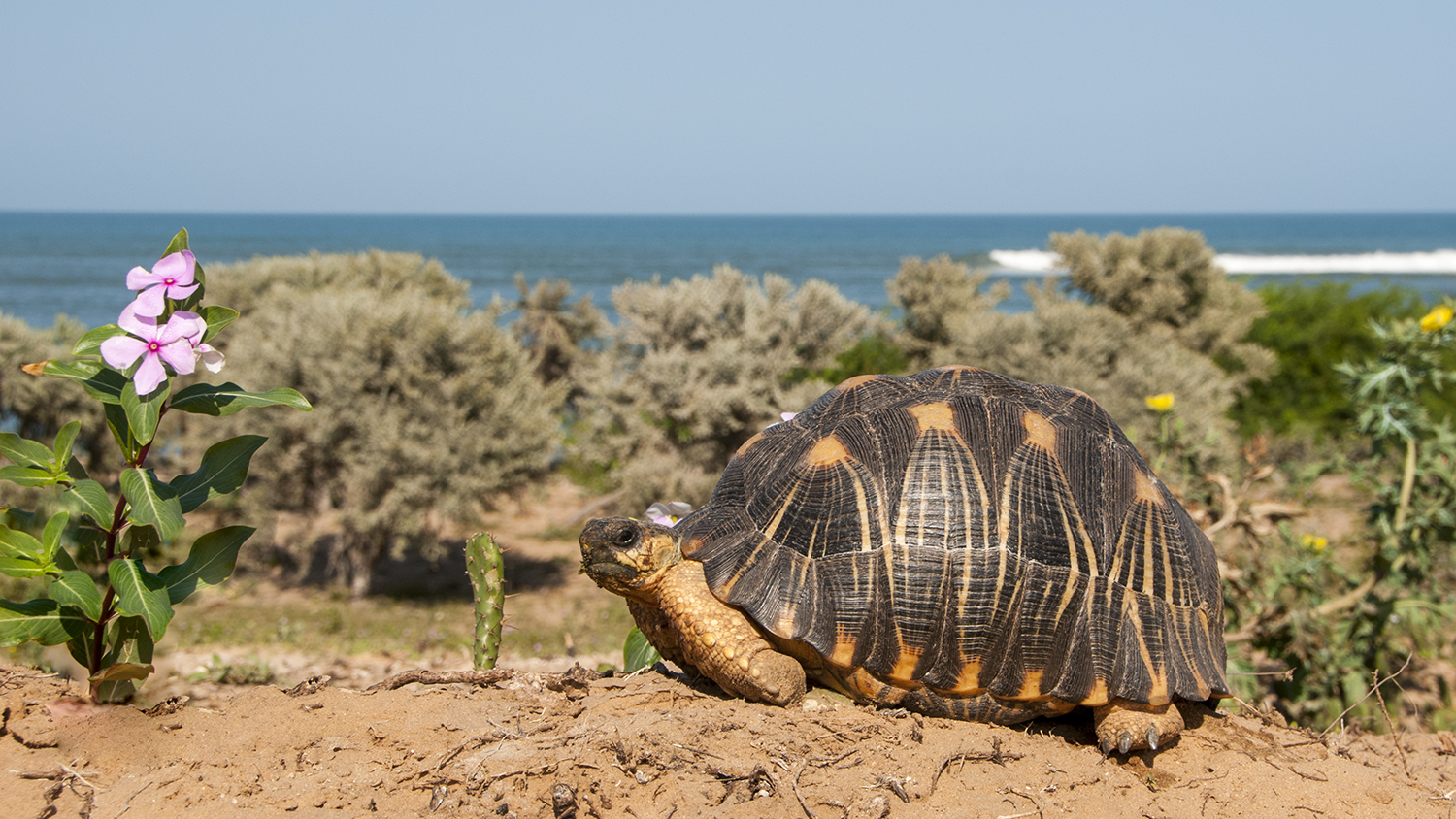 The demand for turtles and tortoises as pets is growing, primarily in Asia. Rare species are seen as status symbols and collectors’ items and are sold for hundreds to thousands of dollars. Authorities estimate millions of freshwater turtles and tortoises are exported from North America, Europe and Africa each year. Turtle farms supply a vast number of animals to markets, but many are still captured in the wild.

Turtle farming for food and medicinal markets is an enormous industry. In Southeast Asia, hundreds of millions of Chinese softshell turtles (Pelodiscus sinensis) are bred for the table. Asian box turtles, such as the Chinese three-striped box turtle (Cuora trifasciata), are both captive bred and collected from the wild for their supposed medicinal value. More than 1,500 turtle farms exist in southern China alone.

In some cases, turtle farms are used to disguise illegal activities. A farm may supplement its stock with wild-caught populations and lie about the origins to circumvent laws. Farms also engage in “turtle laundering.” For instance, if a tortoise is smuggled from Madagascar to China, it is no longer protected by native species laws in Madagascar and can be sold legally out of a Chinese turtle farm claiming it is captive-bred.

“While some species are farmed sustainably, the problem is that turtle farms don’t always limit themselves to those turtles. They also continue to take turtles from the wild and then call them captive-bred, but they’re really not,” said Craig Stanford, first author of the paper, professor at the University of Southern California and the chair of the IUCN Tortoise and Freshwater Turtle Specialist Group.

Loss of habitat is the biggest threat to turtles and tortoises globally, according to the paper. The leading cause of terrestrial habitat loss is the conversion of land for commercial agriculture. Logging and livestock grazing in wildlands also contribute to declines, as does habitat fragmentation from the expansion of towns, cities and roads.

Turtles’ long lives make them vulnerable to the pollution accumulated in the environment over time. For females that spend their lives on lake and river bottoms, exposure to toxins that accumulate in sediments, such as PCBs (polychlorinated biphenyls) and heavy metals, can reduce the survivability of their offspring.

Commercial fisheries often accidentally catch aquatic turtles. Better fishery management practices such as the use of turtle exclusion devices have been successful, but are still not used everywhere. One study estimated that, along the East Coast of the U.S., crab traps kill 15% to 78% of local diamondback terrapin (Malaclemys terrapin) populations each year.

Invasive plants and animals bring disease, parasites and competition to turtles.  Bacteria and viruses such as herpes and ranaviruses are on the rise and causing die-offs in turtle populations. The introduced, invasive European red fox (Vulpes vulpes) has devastated Australia’s native turtle populations. Human development increases the population of predators such as pied crows (Corvus albus) and common ravens (Corvus corax), the latter of which prey heavily on Mojave Desert tortoises (Gopherus agassizii) in the southwestern United States.

Scientists are still uncovering the effects of climate change on turtles and tortoises since their long lives make changes over populations harder to study. Still, the paper’s authors say droughts, changes in water cycles, habitat degradation, and rising sea temperatures are all taking a toll on turtle populations around the world.

Preventing turtle extinctions this century requires protecting their remaining habitat, the authors write, particularly limited nesting habitats. They found the majority of turtles and tortoises on Earth could be protected by safeguarding 16 hotspots that cover 16% of the Earth’s land surface.

“Why are they declining? Why are they in trouble? The problem is the failure of the regulatory agencies to take action,” Berry told Mongabay. “I think that if a country, such as the USA, can put a man on the moon then they’re perfectly capable of recovering these endangered and threatened species.”

Ending the trade of wild turtles for food, medicine and pets is also an important part of a global conservation strategy. CITES regulates trade by restricting international transport of the threatened turtle and tortoise species listed in its appendices. But legal loopholes remain. The researchers urge the enforcement of existing laws, the enactment of new laws closing loopholes, and increased public awareness.

Fortunately for turtle and tortoise species, many can breed in captivity, hopefully bringing them back from the brink of extinction. Captive breeding programs have brought species such as the Hood Island tortoise (Chelonoidis hoodensis), one of the dozen species of famed Galápagos giant tortoises, back from the brink of extinction. But for some species, such as the ploughshare tortoise, putting them back in the wild is futile until conditions become safe for release. Until then, the genetics of captive populations have to be managed to prevent issues like inbreeding depression.

“Even if we breed them in captivity, we can’t put them back in the wild because they’ll just be poached for pet trade again because they’re so valuable,” Stanford said. “So even turtle farming is exacerbating this problem. How do you stop illegal trade when the value of an individual animal is many, many lifetime incomes for the people who are stealing them?”

Sea turtles are a conservation success story. Nesting is on the rise for most of these favorite marine species around the globe. Experts attribute this to better fishery practices, enforcement of laws aimed at curbing hunting and trade of sea turtles and their eggs, and dedicated conservation efforts. These charismatic creatures receive much attention and funding in the turtle conservation world.

To increase their odds of survival, headstarting programs collect turtle eggs from beaches, put them in hatcheries, and keep hatchlings in captivity until they reach a certain size and aren’t as appetizing for other marine creatures. These programs have had some success, reviving populations of turtles such as the Kemp’s ridley sea turtle (Lepidochelys kempii) and the diamondback terrapin.

Conservation programs like headstarting have seen greater success when local people are engaged as stakeholders and informed about the issues, according to previous studies. Strong partnerships with both local communities and governments support conservation projects.

Berry said individuals also have a role to play in safeguarding the health and survival of turtles and tortoises worldwide by being aware of the risks involved in the pet, food and medicine trades, keeping dogs under control in important turtle habitats, and keeping off-road vehicles away from sensitive beaches and desert areas where turtles roam and nest.

Even clothing choices can affect turtles; research shows microplastics and synthetic fibers harm marine turtles and often end up in their guts. Up to a third of microplastics are generated from washing clothing and textiles made from synthetic materials such as acrylic and polyester.

Despite the threats, only one species and three taxa have gone extinct in the past 200 years, while at least three species have been brought back from near-extinction. This, the researchers say, is a reason for hope.

“On the whole, I’m optimistic,” Stanford said. “Pessimism in conservation is counterproductive.”

“I’d like to think that in the early 21st century, we’re living through a bottleneck in which earth’s biodiversity is being contracted, but that we will get through this bottleneck and most of Earth’s biodiversity, including turtle and tortoise biodiversity, will be protected into the 22nd century and beyond. That’s my bottom-line philosophy at all times.”