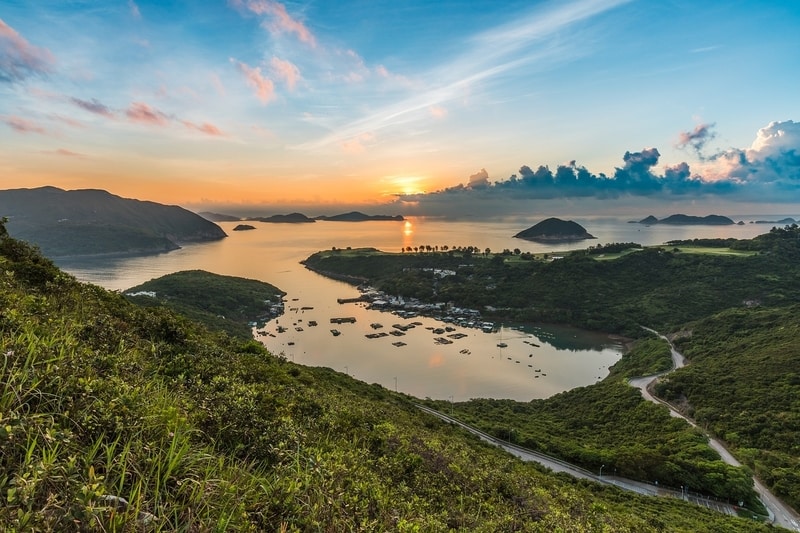 Hidden behind its urban facade, Hong Kong is home to numerous nature reserves. In fact, 75% of Hong Kong land is actually rural and nearly pristine- making the stark contrast between skyscrapers and nature even more alluring. Here are 10 nature reserves and natural landmarks in Hong Kong that you need to visit.

Tai Mo Shan, Hong Kong’s highest mountain, has a height of 957 meters and its surrounding country park holds the record for the highest rainfall and coldest temperatures in the region. The country park is also home to the city’s tallest waterfall, at 35 meters in length.

The park is also home to more than 100 species of birds and butterflies, as well as snakes, like the bamboo snake, which occasionally makes an appearance along the hiking trails.

Known as a monkey haven and located in the North of Kowloon, Kam Shan Country Park is the perfect habitat for macaque monkeys, who are notorious for stealing food straight from visitors’ hands. The park includes four reservoirs, all of which were built and completed in the early 1900s- namely, Kowloon Reservoir, Shek Lei Pui Reservoir,  Kowloon Reception Reservoir and  Kowloon Byewash Reservoir.

The country park also holds historic value. A section of the former British military defence system, Gin Drinker’s Line, intercepts Kam Shan and runs along the mountains of the Kowloon Peninsula, spanning a total length of 18 kilometers. Built in the late 1930s, the defensive line is in fact a series of defence bunkers linked together by paths featuring concrete fortified machine gun posts, trenches and artiliterry batteries.

An ideal area to spot local species of flora and fauna, the less recreational and more preserved forest allows visitors to seek refuge from the dense city. Tai Po Kau Special Area is recognised by the Hong Kong Bird Watching Society as one of the best places to observe rare birds and insects.

Not far from Kam Shan Country Park sits Lion Rock Country Park in the New Territories, spanning an area of 557 hectares and including two famous peaks: Lion Rock and Amah Rock. The hiking trail is challenging and steep, however the views along the way and at the top are worth the exertion. Amah Rock is the first peak and smaller rock formation in comparison to Lion Rock, the second and taller peak.

Hong Kong Wetland Park is located in the New Territories and has become a hub of conservation, eco-tourism and education due to the efforts taken to protect a variety of species that roam there. Among many of the animals residing in the region is Pui Pui the crocodile, Hong Kong’s lovable reptilian mascot, who attracts many tourists and locals alike.

Also considered a reserve, Hong Kong Wetland Park specialises in ecological monitoring and habitat management, and provides information on different species in order to increase awareness on the importance of biodiversity conservation.

Managed by WWF Hong Kong since 1983, the 380 hectare nature reserve is home to thousands of migratory waterbirds and a variety of wetland habitats including gei wais, mangroves, intertidal mudflats and reedbeds.

Because of the biodiversity, the Mai Po Nature Reserve and the surrounding Inner Deep Bay wetlands are examples of the successful conservation efforts in Hong Kong.

Resembling Thailand for its tropical scenery, the Kiu Tsui Country Park in Sai Kung includes beautiful white sandy beaches that resemble those typically seen at holiday destinations. A private ferry service along the Sai Kung promenade transports visitors to Hap Mun Bay or Kiu Tsui, also known as Sharp Island, where a day out in the sun can be enjoyed.

One of the most popular sites within the Hong Kong Geopark is High Island in Sai Kung Peninsula, known for its spectacular rock formations which formed around 140 million years ago.

The High Island Geo Trail tours the region and leads to the shore, where a sea cave lies at the water’s edge. From there, a wooden boardwalk leads to a lookout point that shows visitors the beautiful region devoid of human settlement.

Completed in the 1970s, the East Dam is located on the east side of the Kwun Mun Channel and encompasses a forgotten fishing village that is now submerged.

Lantau peak, the highest summit on the island in Lantau South Country Park, is known for being the perfect spot to watch the sunrise and sunset, and attracts locals and tourists alike for this very reason.

The park also includes activities such as camping, fishing, swimming and biking, making it an adventurer’s paradise.

Tai Tam Country Park is the largest park on Hong Kong Island and comprises one fifth of the Island’s land mass, spanning a total area of 1 315 hectares.

The Tai Tam Waterworks Heritage Trail includes 21 historic waterworks, including aqueducts, dams and masonry bridges, of which many have been declared monuments. The trail spans 5 kilometers, is family-friendly and takes approximately two hours to complete.

In addition to the waterworks trail, the country park includes an array of other hiking trails that vary in difficulty levels.

Hong Kong has more to offer than what meets the eye. Known as one of the business epicenters of Asia, and regarded for its tall skyscrapers, Hong Kong also maintains beautiful nature reserves, with mountainous landscapes, beautiful wetlands, country parks, historic sites and more- making the city a diverse concrete jungle.