Nearly 50 Himalaya Lakes Are at Risk of Breaching- Report 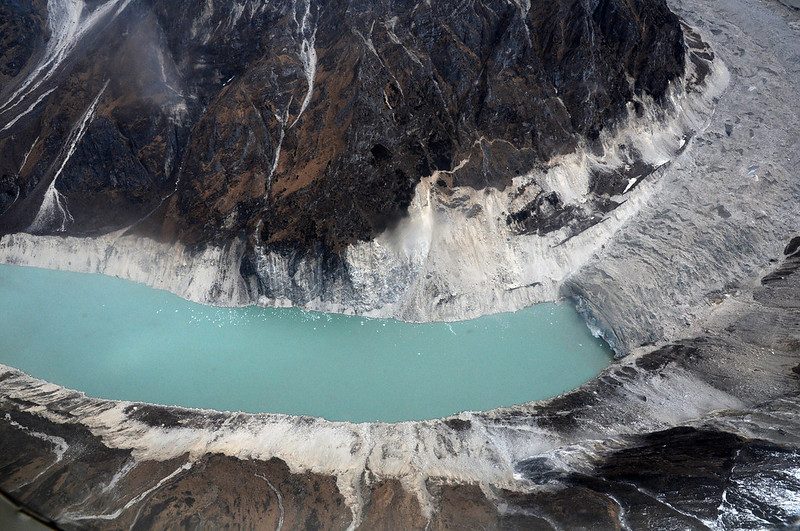 A new report has identified 47 Himalaya lakes that are at risk of breaching, which could cause floods in downstream areas in China, Nepal and India, threatening human lives, livestock and property in the countries.

The report, jointly produced by the International Centre of Integrated Mountain Development (ICIMOD) and the United Nations Development Programme in Nepal, found that overall, 3 624 glacial lakes were mapped in the Koshi, Gandaki and Karnali river basins of Nepal, China and India. Of these, 1 410 lakes are large enough to cause damage downstream if they burst, while 47 need “immediate mitigation action.” 25 of these are in the Tibet Autonomous Region of China, 21 are in Nepal and one is in India. 42 are within the Koshi basin while the Gandaki and Karnali basins have three and two such lakes respectively.

Breaching glacial Himalaya lakes could result in glacial lake outburst floods (GLOFs), which occur when melting glaciers create reservoirs of water that can suddenly burst, leading to downstream flooding. They are massive threats in Nepal and other mountainous countries in the Hindu Kush Himalaya. A 2011 study by ICIMOD reported 26 GLOFs that have affected Nepal since 1977. Records show that, on average, Nepal loses 333 lives and property worth over USD$17.24 billion every year to extreme climate events.

According to a recent study, glacial lakes have grown rapidly around the world in the last three decades, showing the impact of increased meltwater draining off melting glaciers. Between 1990 and 2018, the number of glacial lakes had grown by 53%, expanding the amount of the planet covered by the lakes by about 51%. If global temperatures rise above 1.5C by 2100, two-thirds of glacial ice in the Himalayas will be lost.

The authors say that outburst floods can occur without any precedent, adding further concerns about the threats posed by glacial lakes in the region.

Based on remote sensing and past studies, the 47 lakes were classified into three ranks of risk. The authors also considered whether there are communities or infrastructure downstream. Rank I lakes have a greater possibility of expanding and could experience snow and/or ice avalanches and landslides. A slight rise in water levels or a reduction in the strength of their dams could cause a breach. Those lakes under Ranks II and III have the potential to grow, and need to be monitored closely.

31 lakes are classified as Rank II, 12 as Rank II and four as Rank III.

Mitigation measures are already being planned at some high-risk glacier lakes, which will reduce the risks of flooding for countries downstream.

Wang Shijin, an associate researcher at the Chinese Academy of Sciences and one of the authors of the study, urges researchers in upstream and downstream countries to work together to address the problem.

ICIMOD has made efforts to encourage more cooperation, however geopolitical tensions in the region have impeded such efforts. The report also calls for more information exchange about mitigation efforts. Already, the water levels of Tsho Rolpa in Nepal was lowered by more than 3 metres in 2000, Imja Tsho, also in Nepal, by 3.4 metres in 2016 and two lakes in Tibet, but the details are unknown.

However, some local cooperation has been seen. In July, local authorities along the Bhotekoshi river in Tibet warned authorities in Nepal’s Sindhupalchowk district of a possible outburst flood from Keyrung Tshyo glacial lake in Tibet, allowing the Nepali communities to be alerted.

While there is still little research in high mountain areas, the agencies involved in the report hope that such data will help governments enhance transboundary cooperation to better mitigate and prepare for the effects of the climate crisis.