US President Joe Biden signed an executive order aimed at protecting old-growth forests on federal lands across the United States. Federal agencies are directed to define, inventory and better protect the nation’s oldest trees by leaning into reforestation commitments and employing nature-based solutions to reduce emissions. The order is part of the Biden administration’s pledge to end natural forest loss by 2030, while restoring at least an additional 200 million hectares [494 million acres] of forests and other ecosystems. The order does not ban the logging of old-growth trees which scientists say is necessary to address deforestation and emissions from the logging industry which emits comparable levels of CO2 to the emissions from coal-burning.

President Joe Biden signed an executive order aimed at protecting old-growth forests on federal lands across the United States. Federal agencies are directed to define, inventory, and better protect the nation’s oldest trees; lean into reforestation commitments, and employ nature-based solutions to reduce emissions. The order does not ban the logging of old-growth trees.

The new order directs the departments of the Interior and Agriculture to conduct the first-ever inventory of old-growth and mature forests on federal lands—to be completed and made publicly available within one year.

The US Forest Service, the Bureau of Land Management, and the National Park Service have been asked to define regional and ecological variation within the forests; identify threats, such as drought, fires, insects, and climate change; and to develop policies for the conservation and management of these forests.

Wildfires have devastated the Western US in recent years. Although fires occur naturally in many of these ecosystems, they are increasing in frequency and severity. In the Rocky Mountains of Colorado, for instance, forests are burning more frequently than any time in the past 2,000 years.

Warmer and drier climate conditions mean the vegetation is drier, making it easier for fires that ignite to spread. Additionally, a few centuries of colonial rule and the resulting fire suppression practices have left many Western ecosystems in a fire deficit. This means that when fires do occur, they often burn out of control, threatening cities, infrastructure, crops, and homes.

A White House official said preserving old-growth forests, “will reduce the trajectory of wildfire risk to communities and natural resources, including mature and old-growth forests,” The Hill reported. “At the end of the day, nature is one of our best and most cost-effective defenses we have against climate change.”

The Biden Administration says it will work with Congress and will request $6.1 billion for wildfire risk reduction in 2023.

Old-growth forests also serve as a refuge for animals fleeing fires in younger forests, making them a key part of preserving biodiversity in the increasingly fire-prone US West.

The order also builds on the Biden administration’s pledges to, “end natural forest loss by 2030, while restoring at least an additional 200 million hectares [494 million acres] of forests and other ecosystems,” according to a White House statement.

“We’ve reached the point where the crisis on the environment has become so obvious, with the notable exception of the former president, that we really have an opportunity to do things we couldn’t have done two, five, ten years ago,” Biden said in a speech.

One of the major issues faced by reforestation efforts in the Western US is a lack of seeds and seedlings for planting projects. The new order specifically addressed this, the order asks that agencies plan to collect more seeds and cones and increase tree nursery capacity. The order also requires federal agencies to develop their own 2030 reforestation targets.

The US is the second largest emitter of carbon globally. Old-growth forests are important storehouses of carbon and absorb the carbon dioxide equivalent to more than 10% of US annual greenhouse gas emissions. This makes their preservation an important part of the US strategy to meet climate goals.

The order discusses slowing deforestation overseas but does not regulate or restrict trade of the commodities with known links to forest clearing, such as beef, palm oil, and soy. Instead, it says the Department of State will lead a report on “whole-of-government approaches to reduce or eliminate US purchases of agricultural commodities grown on illegally or recently deforested lands.”

Logging is notably missing from the order and White House statement, and critics say the Biden administration is not doing enough to address deforestation in the US. Timber is still a major industry and logging in US forests emits comparable levels of CO2 to the emissions from coal-burning (more than 723 million tons).

Last November, more than 100 scientists with expertise in ecology, forest management, biodiversity, and climate change issued an open letter to US President Joe Biden and members of Congress urging them to remove provisions promoting logging and fossil fuels from the multitrillion-dollar infrastructure and reconciliation bills.

“The Infrastructure Bill includes a legislative mandate for 30 million acres [12 million hectares] of additional logging on federal public lands over the next 15 years, in addition to misdirecting billions of dollars in new subsidies for the fossil fuel industry and an exemption from environmental analysis for new oil and gas pipelines across federal lands,” the letter states.

Leila Salazar-López, executive director of Amazon Watch, who has worked as a forest and Indigenous rights activist for decades says this perceived battle between the economy and the environment is old news.

“It’s either we protect forests or we protect jobs. There’s always been that argument,” she said in a Q&A published by Mongabay. “But it’s not either-or.”

The order discusses job creation, saying that it will “advance forest-related economic opportunities,” and “create and sustain jobs in outdoor recreation and in sustainable wood, paper, and other forest products, while supporting healthy, sustainably managed forests in timber communities.”

“There’s already so much land that is being used for timber,” Salazar-López said. “Just one idea is to not expand into primary forests. I think that is really the call…we don’t want to continue an economic model that destroys our forests, our ancient forests.” 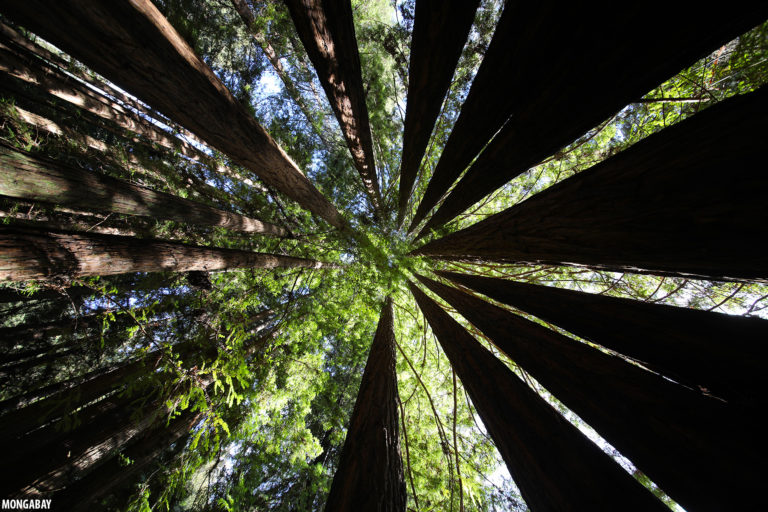