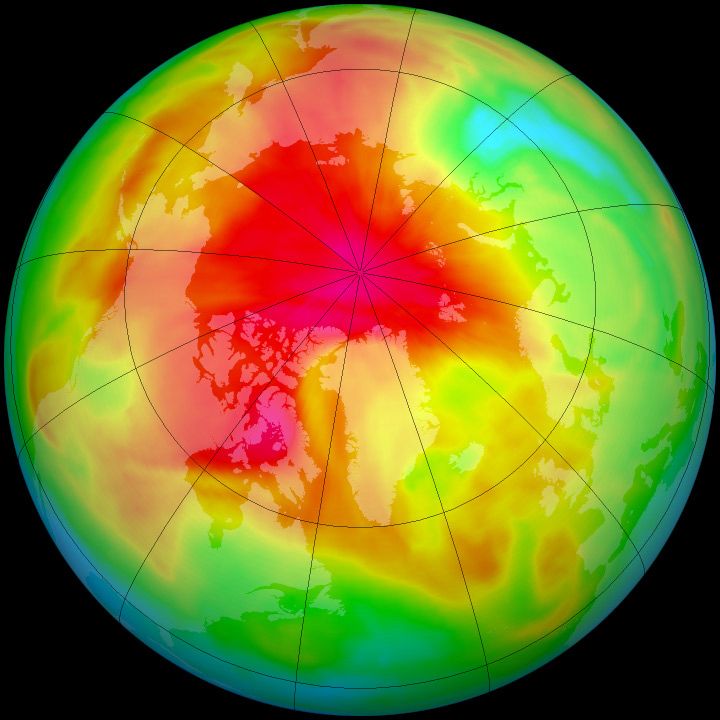 The unusually large size of this year’s ozone hole is a result of a strong, persistent and cold polar vortex, which keeps temperatures of the ozone layer above Antarctica cold. This facilitates ozone depletion because polar stratospheric clouds, important for the wearing of the ozone layer, form below -78°C. According to NASA, the 2019 ozone hole above Antarctica was at its smallest in 30 years, peaking at 16.4 million square kilometers and shrinking to less than 10 million square kilometers. It also closed earlier than usual. This was due to unusually strong and warming weather conditions that weakened the polar vortex, which prevented polar stratospheric clouds from forming.

The European Space Agency’s missions manager for the Copernicus Sentinel-5P satellite, Claus Zehner, says that the “ozone hole phenomena cannot be used in a straightforward manner for monitoring global ozone changes” because it depends on the “strength of regional strong wind fields that flow around polar areas.”

The formation of Antarctica’s ozone hole is an annual event. The hole normally forms during the Southern Hemisphere’s late winter as ozone-depleting reactions are induced by sun rays. This reaction occurs between active forms of chlorine and bromine that comes from anthropogenic sources, gradually thinning the Earth’s ozone layer. Ozone depletion increases the amount of UV radiation that reaches Earth’s surface, which can impact life on Earth such as plants and cause cancer in humans. The variability in size of the ozone hole is predominantly driven by the strength of a wind band that flows around Antarctic regions. This wind band is brought on by strong temperature differences between polar and moderate latitudes and Earth’s rotation.

The Montreal Protocol agreement was established in 1987 to reduce ozone-depleting substances in the atmosphere to protect the earth’s ozone layer. Scientific discoveries in the 1970s and 1980s showed that human activities were affecting ozone levels in the stratosphere and creating the ozone hole. The Montreal Protocol is one of the most successful environmental protection agreements, with 197 countries ratifying the agreement. The protocol has a timeline for developed and developing countries to phase out 96 ozone-depleting chemicals. So far, many substances such as chlorofluorocarbons (CFCs) and hydrochlorofluorocarbons (HCFCs) have been phased out by both developed and developing countries. Hydrofluorocarbons (HFCs) remain on a tight schedule to be reduced by 85% by 2036 in developed countries and 80% by 2045 in developing countries.

The Copernicus Atmosphere Monitoring Service states that despite the large ozone hole this year, the positive impact of the Montreal Protocol means that the ozone layer is on a “slow recovery” to reach 1980 levels by 2060. However, there is also a connection between the changes in the ozone layer and the climate crisis, which may delay recovery.