Ozone Layer Restoration Is Back on Track as Harmful Chemicals Phased Out, UN Says

The Earth’s ozone layer is on track to be fully healed for most of the world by 2040, according to a new UN-backed scientific assessment.

The ozone layer, which serves as a protective shield against the sun’s ultraviolet radiation, is on track to be completely healed over most of the planet by 2040 owing to the decision to phase out ozone-depleting chemicals, a new UN assessment has found.

The layer’s loss was once regarded as humanity’s most dangerous environmental challenge. Described as a region of the earth’s stratosphere, the ozone layer serves as a protective shield against the sun’s ultraviolet radiation, where exposure can result in increased risks of skin cancer.

First used for fridges in 1928, it was not until the 1970s that scientists realised chlorofluorocarbons (CFCs) could react with atmospheric ozone, producing oxygen and depleting the protective ozone layer. Once this was established, a global effort was made to combat the use of CFCs in household applications like refrigeration units, air conditioning, and aerosol cans. The Vienna Convention for the Protection of the Ozone Layer, first formed in 1985, and its Montreal Protocol, adopted in 1987, represented the first global effort to combat human-driven climatological effects.

After countries agreed to phase out CFCs under the Vienna convention, the hole in the ozone shield kept growing until the year 2000. During this period, however, bromine and chlorine levels in the Antarctic stratosphere declined by 16%. Fast forward to 2019, and the ozone hole had diminished to its smallest since the 1980s at a peak area of 16.4 million km2. 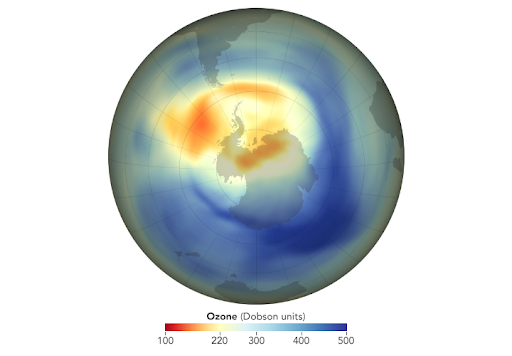 The extent of ozone depletion in 2019 was the smallest in almost 40 years of satellite records and observations. (Source: NASA Earth Observatory Image, developed from data gathered by NASA Ozone Watch and Global Modelling and Assimilation Office).

Now, the hole in the ozone layer is on track to completely recover within two decades across the world, the new UN-backed scientific assessment has found. It will take slightly longer in polar regions, with the hole over the Arctic expected to be fully healed by 2045 and that over the Antarctic by 2066.

Changes in policies and climate change-related events such as wildfires, however, could delay the recovery. A 2022 assessment found that wildfire smoke from Australia’s 2019-2020 Black Summer destroyed 1% of the ozone layer circling above the Southern Hemisphere. Despite this, the ozone layer’s recovery remains one of history’s most successful climate restoration stories.