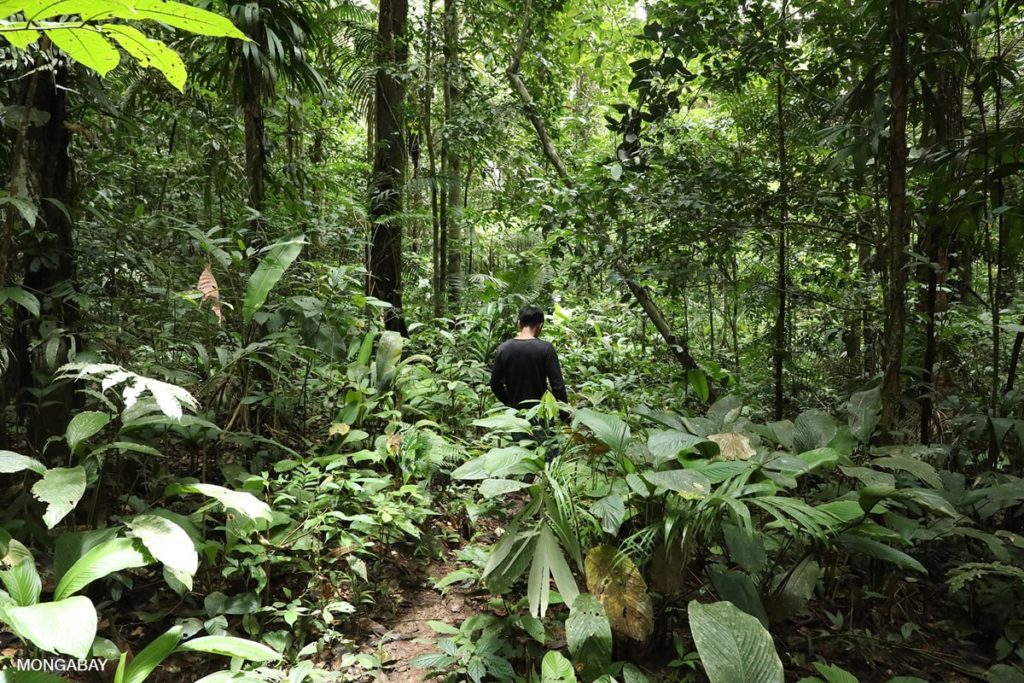 A new study argues that the concept of a “pristine wilderness” that’s free from human inhabitants is a failing Eurocentric concept that may be used to expand conservation areas, a concern the U.N. special rapporteur on human rights and the environment reiterates in a policy brief about the Post-2020 Global Biodiversity Framework. The displacement of Indigenous peoples and local communities from such landscapes for conservation purposes may have adverse impacts on the ecosystem’s integrity and lead to the degradation of biodiversity.

What is Pristine Wilderness?

The idea of a “pristine wilderness” in conservation efforts — a natural zone free of people — is an erroneous construct that doesn’t reflect the reality of how many high-value biodiverse landscapes have operated for millennia, a new study says. In fact, enforcing this concept can cause environmental degradation of these areas when their human inhabitants, such as Indigenous peoples and local communities who have adapted to living sustainably in these zones, are displaced from them, the study says.

In their paper published Oct. 5 in the Proceedings of the National Academy of Sciences, the authors make the case that a “pristine wilderness” where rich biodiverse forests continue to thrive without humans present is a Eurocentric construct. It emerged during the Enlightenment period in the West and was later imposed on Indigenous peoples and local communities the world over as they were displaced from their ancestral lands. This idea gained particular traction during European colonial and conservation efforts in the 19th and 20th centuries across the Americas, Africa, Asia Pacific and Australia, and may be experiencing a particular resurgence today among large international conservation organisations, philanthropists, foundations, and certain governments.

A high-profile case that may be giving renewed salience to this idea is the Post-2020 Global Biodiversity Framework’s draft target 3, which highlights the importance of preserving at least 30% of Earth’s land and ocean by the year 2030. Historically such territorial preservation has been achieved by establishing exclusionary conservation areas, notably national parks. Indigenous and non-Indigenous scholars and human rights organisations say the creation of such conservation areas will lead to the continued displacement and abuse of Indigenous peoples and local communities if it’s framed in the Eurocentric concept of creating a “pristine wilderness,” a system also dubbed “fortress conservation,” where human inhabitants are seen as a liability.

“Fortress conservation is motivated by the mistaken belief that successful conservation outcomes require ‘pristine wilderness’ free from human inhabitants,” David R. Boyd, the U.N.’s special rapporteur on human rights and the environment, writes in his policy brief on the Post-2020 Global Biodiversity Framework.

“Mounting evidence confirms that Indigenous Peoples and other rural rights holders possess the knowledge and ability necessary to successfully conserve and manage biodiverse ecosystems more effectively than governments and at a fraction of the cost, particularly where their rights are recognised, respected and supported.”

The idea that natural wilderness areas should be sanitised of any kind of human presence stems from the Enlightenment theory that sought to release humankind from the binds of religion and other subjective cultural influences, and showcase an objective human isolated from the surrounding world. In doing so, however, this process created a whole new “religious” idea of human beings as separate from nature, while its exclusion of other beliefs narrowed the possibilities and solutions that could be used to address our environmental crises — notably Indigenous traditional knowledge.

The result is the now familiar binary of humans versus wilderness, with the former seen as a civilised entity and the latter, an untamed, primitive, wild space. As this concept evolved over the centuries, it fed the notion that humans could tame and conquer nature — and, by extension, “uncivilised” Indigenous peoples — without any adverse impacts on the humans that were tied to it.

For the authors of the new study, the underlining issue is that, at its core, this construct isn’t in touch with the reality of how many ecosystems operate and how high-value biodiverse landscapes are continuously preserved by human stewardship.

Tropical forests, such as the Amazon, are often showcased as the last key biodiversity hotspots that were in place prior to human contact. However, more than half of the spatial landscape of the Amazon has seen and lived along with human activity over the last 10,000 years, to the extent that the region is shaped by it.

The forests are the centre of the domestication of more than 80 crop species, such as cassava (Manihot esculenta), wild rice (Oryza spp.), peanuts (Arachis hypogaea), and chilli (Capsicum baccatum). Agroforestry and the cultivation of maize began around 6,300 years ago and intensified more than 1,000 years later. This domestication and cultivation actively produced human-generated organic soils called Amazonian dark earth that now extend across a significant part of the Amazon and support the “distinct human-modified forests” and their diversity.

“This has influenced forest composition to such an extent that much of the forest is disproportionately rich in domesticated species,” the paper says.

Agroforestry cultivation practices, called chagra by Indigenous communities such as the Nonuya, Andoque and Ceima Chacivera in the northwestern Colombian Amazon, have been shown to lead to “diverse and highly dynamic landscapes” that are largely in line with forest cover thresholds set by the Food and Agriculture Organization and the Kyoto Protocol.

Maps detail how much of the “wild” hotspots of the Amazon are actually the ancestral territories of Indigenous communities that have lived, hunted, gathered and cultivated there for millennia. Most areas that aren’t Indigenous territories are areas containing either the predicted human-generated soils, domesticated plants, or earthworks.

In the case of another biodiversity hotspot, Southeast Asia and New Guinea, humans have been hunting and using horticulture techniques, such as swidden, for more than 40,000 years. A technique of rotational agriculture used sustainably in the highlands, it requires clearing a strip of forest by cutting down trees and burning them to have land to cultivate for a short period. The land is then returned to the forests as the farmers shift to another strip of land.

Sustainable swidden agriculture is often lumped together with the encroachment of farms on forests, giving it the name “slash and burn.” Certain large conservation organisations and the REDD+ program see it as “incompatible with nature and conservation” or having degraded the “pristine ecology of tropical forests.”

However, today, swidden agriculture supports more than 14 million highlanders in the Southeast Asia and New Guinea region, and paleo-ecological research has demonstrated how it may increase landscape-scale biodiversity and forest resilience to climate change.

“Despite long being cultivated, these highland zones capture some of the most biologically, linguistically, and culturally diverse zones on earth,” the paper says.

Removing humans from these zones that they have co-evolved with and shaped may degrade the ecosystem’s health by removing the human drivers they have come to depend on. A case study focuses on what occurred in Australia from the 1960s to the 1980s. After displacing the Aboriginal inhabitants, who consist of the world’s oldest continuous culture, from the tropical deserts, savanna and forests around the western deserts, uncontrolled wildfires and an erosion of the region’s biodiversity ensued.

According to researchers, the culprit was the lack of humans to perform low-intensity patch burning and hunting. Patch burning diminishes the intensity and destruction of wildfires on flora and fauna through controlled burns, while hunting balances species’ populations. The lack of patch burning in the region helped precipitate the decline and endangerment of many species in the western deserts, including keystone species such as the sand monitor lizard (Varanus gouldii).

“Long-term, multidisciplinary data from all three biomes indicate the long, continuing legacies of humans in shaping these supposedly ‘wild’ landscapes, ranging from food tree manipulation in the Australian Wet Tropics, to the construction of place-based societies across the Western Deserts,” the paper says.

Aboriginal notions imagine a “pristine wilderness” to be one that is, in fact, ecologically degraded without the presence of humans. This illustrates how the concept of “fortress conservation” doesn’t take into account the environmental necessities of various different ecosystems to maintain their integrity.

The co-evolution between people and place, between managed forests and the cultural, spiritual and economic needs of Indigenous peoples and local communities, occurred over millennia. Displacing humans from their lands to create “pristine” conservation areas not only entails human rights violations and social conflicts over territory, but may erode the biodiversity of ecosystems that co-exist with human intervention while impeding conservation efforts by ignoring Indigenous traditional knowledge of forest management.

Boyd, the UN special rapporteur, highlights multiple recommendations for the post-2020 global biodiversity targets to avoid continuing on the same failing conservation path of separating humans from nature, and encourages embarking on a transformative path that puts rights-based approaches at the heart of biodiversity conservation.

“Accelerated efforts to expand protected areas have proven insufficient to stop or even slow the tidal wave of environmental destruction sweeping the planet,” Boyd says. “Indigenous Peoples and other rural rights holders who successfully steward vast portions of the world’s biodiversity [are] vital conservation partners whose human, land, and resource rights must be recognised and respected if biodiversity loss is to be stopped and reversed.”

Featured image by Rhett A. Butler/Mongabay.