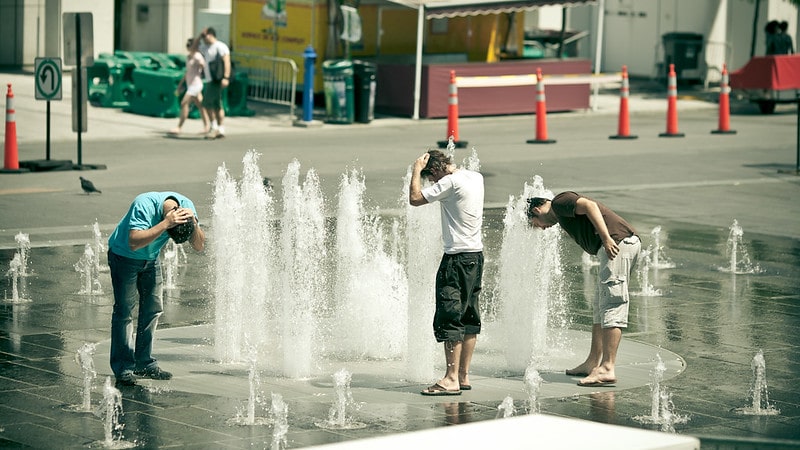 A new study suggests that record-shattering heat waves and climate events will become more frequent and more intense as the world continues to warm due to human-induced climate change. Should the world remain or even increase its current high carbon emission levels, extreme heat waves will be two to seven times more probable between 2021 and 2050, and 21 times more probable between 2051 and 2080.

In late June, Portland, Oregon, experienced its hottest day on record, reaching 42° Celsius (108° Fahrenheit). The last time it had been this hot was in 1981, when temperatures soared to 41°C (107°F). The very next day, the record was broken again, but this time by an even higher margin at 44°C (112°F). Other parts of the Pacific Northwest roasted and broiled as well. On June 30, the town of Lytton in British Columbia, Canada, reached a dangerous peak of 49°C (121°F), which helped fuel a wildfire that essentially razed the entire town.

A new paper published July 26 in Nature Climate Change provides some sobering news for the future: these record-shattering heat waves are set to become more common and more intense as global temperatures continue to rise over the coming decades due to human-induced climate change.

“We are arguing that in the coming decade or two, we should definitely expect to see more frequent and higher-intensity events, meaning that records are broken by larger margins,” lead author Erich Fischer, a climate scientist at ETH Zürich, told Mongabay in an interview. “What happens after that depends on our emissions and whether we are able to bring the emissions rapidly down.”

Fischer and his colleagues took a different methodological approach to previous studies on the subject. Instead of looking at extreme heat waves as anomalies relative to common temperature means, they measured the intensity of the events by the margin at which they broke previous records. They argue that these events tend to happen at times of accelerated warming, and that these extreme heat waves would generate the greatest impacts the first time they occurred at a certain location.

Using climate models that took a high-emissions scenario into account, the researchers found that weeklong heat extremes that break previous records would be two to seven times more likely in the mid-latitudes between 2021 and 2050, with about a 6% chance of these events happening each year. The models also showed that extreme heat was three to 21 times more probable between 2051 and 2080 when compared to the preceding three decades, with a 17% chance of these events each year. This suggests that after the year 2050, we could be seeing heat extremes about every six years.

Fischer said their study is meant to offer a complementary perspective to other scientific approaches that define climate extremes as anomalies.

Geert Jan van Oldenborgh, a climate scientist at the Royal Netherlands Meteorological Institute (KNMI), who was not involved in the study, said he was pleased to see this paper come out at the time it did.

“It came right as we were analysing the heat wave in the U.S. Pacific,” van Oldenborgh told Mongabay in an interview. “The big problem with that heat wave was that it had this enormous jump in record temperatures. Records were broken by up to five degrees in Portland and Vancouver and other places. We had two hypotheses how this could work: one of them is that it’s sheer bad luck, and the world is a big place and things happen sometimes. The other is that new mechanisms have come into play that weren’t producing heat back a few years ago, and made this kind of heat much more likely. And the amazing thing is, of course, that paper addresses exactly these questions.”

Van Oldenborgh said he and his colleagues will be able to use and build upon this study in their future research, and that he’s already reached out to Fischer and his team to collaborate on another paper looking at extreme heat events.

The theory of planetary boundaries suggests that the world has nine Earth system processes that are essential for regulating and stabilising the Earth, but have certain limits within which they can withstand human-driven pressures. It is suggested that climate change — one of the core boundaries — already exceeded the safe operating space when we passed 350 parts per million (ppm) of carbon dioxide in the atmosphere, which, in turn, has accelerated global warming. The Paris Agreement, however, aims to curtail global warming by rapidly decreasing global emissions and make sure the planet does not warm by more than 2°C (3.6°F) above pre-industrial levels.

While the study’s findings generate serious concerns about the state of our planet, Fischer said he feels hopeful when seeing the actions currently being taken to try and curb emissions and stabilise the planet. If we do manage to bring down emissions, this would help reduce the frequency and intensity of extreme heat events, Fischer said.

“It is in our hands,” he said. “If we are going where we are aiming for with the Paris Agreement, it could substantially … reduce the probability of seeing those record-shattering events in the future.”