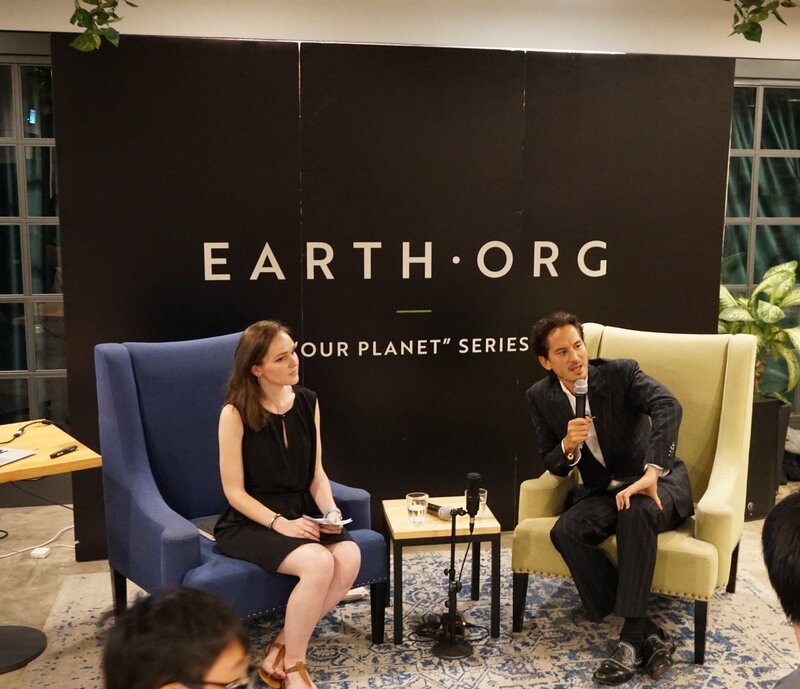 Sean Lee-Davies is a wildlife conservationist, adventurer and producer who founded Project C: Change, an NGO that raises funds and awareness in Asia to combat the illegal wildlife trade through art, photography and film. The funds generated from his multimedia projects go to charities working to protect animals and ecosystems from poaching, overfishing and possible extinction.

He is also the founder of Awethentic Studio, a production house specialising in branded content, television and film and he has since produced and hosted shows all over Asia, including documentaries for National Geographic, Channel News Asia and TVB.

Earth.Org spoke to Sean Lee-Davies back in March 2020 as part of the “Our Planet” series to hear his experience as a conservationist in Asia and using the power of the media to bring awareness to an issue plaguing humanity.

Earth.Org: Could you tell us about your NGO, Project C: Change?

Sean Lee-Davies: I set up Project C: Change 10 years ago. I used to be the Directing Editor of a very well-known publication which promotes luxury lifestyle. What they do has certain merits: during my travels as a journalist, I was seeing what was going on behind the scenes. I was very lucky to have visited the red carpet events but then also travel to the outskirts of civilisation; when I saw what was going on, I thought to myself, “this can’t be right, this is not sustainable.” When I left, Project C:Change became my way of “paying back” what I’ve taken from the world. The reason I called it Project “C” Change is because we’re trying to change consumerism and capitalism by elevating our consciousness. Essentially, if you look at all the problems that we’re now facing in the environment, they are caused by us being too greedy; we are voracious consumers- that’s built and hardwired into our nature- so we need to change our consumption habits in order to bring about a new conscientious form of capitalism. That is pretty much what Project C: Change is aimed at doing and we sometimes do that with the help of celebrities, because they can fast track context or behavioural change.

EO: Project C: Change recently went to Kilimanjaro for a celebrity charity climb where you raised awareness about the illegal wildlife trade. Could you tell us a little bit about the purpose of the climb and any challenges that you encountered along the way?

Sean: I take people who are interested in the environment or those who want to be changemakers to places like Kilimanjaro, the Borneo rainforest or to see the polar bears because I believe that while travel is arguably not sustainable, it’s the kind of travel where you learn and come back with new perspectives. Charities are doing amazing work, but even with all the charitable work, we’re at a stage where 40% of the world’s wildlife could be wiped out in the next 40 years; where half of all coral reefs have disappeared and will completely die out by the end of the century if we don’t do anything. So, despite all the great work that charities are doing, not enough is being done. I believe that the only way to enact change quick enough is for businesses to change; they need to see that it’s in their best interest to be sustainable for a better, more fruitful future.

Going back to Kilimanjaro. The genocide of animals is largely driven by Asian demand and you can’t get rid of the trade if the demand still exists; there will always be someone on the ground in Africa wanting to kill an elephant for a few hundred US as long as there is a demand for it here in Asia, so why did we go to Kilimanjaro? We want to show people that there is a connection between what is going on in Africa and in Asia. We raise money for the charities that we’re partnered with and then they come back with a new perspective on how fragile the circumstances are and they do their good work here.

I did Kilimanjaro for the first time nine years ago and it was an amazing journey, which is why I wanted to do it again. This time, it rained every day and it was meant to be the dry season. In Antarctica, temperatures reached 20 degrees Celsius. That is apocalyptic- this is Antarctica!

The eastern seaboard of Africa has been experiencing torrential rain since last November. Ironically, we went to Kilimanjaro to raise awareness about climate change and we basically got dumped on for eight days. All the predictable weather systems that we followed that are now changing rapidly.

EO: Touching on the biodiversity loss that you were talking about before: recently, the consumption of wildlife was permanently banned in China much to, I think, most people’s delight, but it is an industry that’s worth $73 billion and employs almost 14 million people– so it’s clearly an industry people are still supporting. Why do you think this is still the case?

Sean: As you mentioned, it is a hugely profitable business. I think the coronavirus has brought into focus this trade and consumption of wild animals, and we should have learned our lesson after SARS, which came from a civet cat; we were eating wild animals which shouldn’t have been in our possession. The pangolin is the most illegally traded animal on the planet and it is used widely in Chinese medicine because of its supposed medicinal qualities (same as the rhino). There’s no scientific basis for this, but how do we get rid of these false beliefs? This is one of the hardest things to do from a conservation point of view. Behavioural change is really one of the most difficult things to do- it takes a huge amount of celebrity and government endorsement or messaging to try and change a belief system.

Sean: Absolutely! The government has banned it now since our efforts and lobbying. It wasn’t just us doing it, there were many charities involved. The ban was going to go into effect from 2021, but there have been some legal challenges. The businesses that will be put out of businesses have called for compensation and I don’t think the government has quite figured this out, but they have known that this is a bad business for decades. There will still be some of this illegal trade going on; the killing will still go on in Africa.

There is progress though- the shark fin trade has gone down by half in China and 90% of Chinese people would be willing to abandon shark fin. It shows you there is progress, but everyone needs to get on board, which takes a long time.

EO: Can you tell us about a moment or experience during your travels that you found most shocking?

Sean: There’s many, but when I was in South Africa for a wedding, a rhino had been shot outside the safari area and she was pregnant with a fetus inside its stomach. It was one of the most horrific things I have ever seen or experienced.

I’ve seen elephants with their trunks cut off and forests in Borneo cut down. When you look at it from a holistic perspective as a species living within an ecosystem, there is nothing smart about this. We have what I call an insanity gene because we don’t see our connection with nature; we see ourselves as being separate and distinct from it.

EO: From your experience, what narrative or imagery converts people to the cause most effectively?

Sean: There has to be a constant stream of activities- we’ve done TV shows, photo exhibitions, magazine articles, marches on the street,street art festivals and gala dinners. You have to do a bit of  everything these days to get people to really care. At the end of the day, education is the key: I feel that the young kids now are far more connected to this because they have access to a lot of information. When I was a teenager, I didn’t have the information that we now have at our disposal. It gives me hope.

To see the full interview with Sean Lee-Davies, click here.