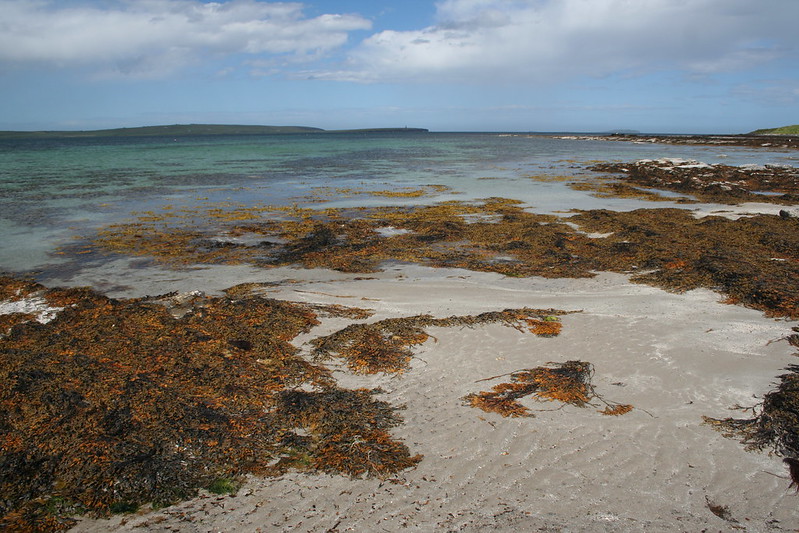 From the Gulf of Guinea to the mouth of the Senegal River, a sprawling shroud of seaweed is choking coastal ecosystems along West Africa and the fishing communities that depend on them.

Offshore, it snags lines, breaks nets and clogs up outboard motors. On shore, it accumulates in vast brown heaps, tide after tide, obstructing both boatmen and nesting sea turtles. As the seaweed rots, it releases foul-smelling hydrogen sulfide gas, causing respiratory illness in local populations. And in nearshore habitats, the same processes of decay depletes the oxygen in the water, killing marine animals in gruesome mass die-offs.

“It came as a shock to people,” said Paul Lamin of Sierra Leone’s Environment Protection Agency, describing the first inundation of June 2011. “We had never experienced such a large quantity of seaweed washing on our beaches.”

Scientists at the University of Sierra Leone subsequently analysed the seaweed, identifying two species of non-native brown macroalga of the genus Sargassum: S. fluitans and S. natans. Both are abundant in the Sargasso Sea, a vast, shoreless, gyre-bound body of water encompassing nearly two-thirds of the North Atlantic Ocean.

Pelagic Sargassum is bushy, rootless and buoyant. It reproduces asexually by propagating from detached fragments. Kept afloat by gas-filled vesicles that resemble berries, Sargassum aggregates into floating mats that provide nourishment and shelter to a host of rare fauna. At least 10 endemic species inhabit the Sargasso Sea, including the Sargassum anglerfish (Histrio histrio), a cannibal frogfish with flawless camouflage and grasping, prehensile fins that enable it to clamber around the tangle of seaweed.

Flying fish, marlin, and migratory eels all spawn in Sargassum, and several species of shark and tuna migrate through the region, too. Thirty species of whales and dolphins have been observed in the Sargasso Sea, including humpback and sperm whales. And four species of endangered turtle use the Sargassum as a nursery.

Once described as “the golden rainforest of the ocean” by U.S. oceanographer Sylvia Earle, the Sargasso Sea is a haven for life. However, large-scale Sargassum beaching events are singularly destructive to local biodiversity.

Small, occasional and harmless quantities of Sargassum have always washed up on Atlantic beaches, but the enormous quantities observed since 2011 are a startling new occurrence that almost certainly heralds a long-term and irreversible shift in the ecology of the ocean.

The source of this seaweed is not the Sargasso Sea, but a massive, novel, transcontinental algal bloom, stretching 8,850 kilometres (5,500 miles) from West Africa to South America, north to the Caribbean and beyond to Mexico, called the Great Atlantic Sargassum Belt (GASB). it burgeons to life from April to October every year, though it can vary in mass, timing and distribution. In 2013, the GASB did not bloom at all. In 2018, it grew to more than 20 million tons. Scientists and policymakers around the world are now scrambling to understand the phenomenon.

According to Lamin, in Sierra Leone, funding for further studies and on-the-ground responses has been particularly stretched this year due to the COVID-19 pandemic, which has shifted government focus away from Sargassum. It has been almost impossible to mobilize youth volunteers for beach cleanups, an activity usually undertaken with the help of community groups, NGOs and local businesses, as well as the national tourist board.

To combat this scourge of seaweed, researchers in Ghana are participating in an innovative interdisciplinary project involving partners in Barbados, Jamaica and the United Kingdom, called “Teleconnected SARgassum risks across the Atlantic: Building capacity for TRansformational Adaptation in the Caribbean and West Africa (SARTRAC).”

Led by the University of Southampton, U.K., SARTRAC is a three-year project and the only one in the world to investigate Sargassum on both sides of the Atlantic.

The researchers’ work includes developing a Sargassum early-warning system using satellite imagery, modeling and drones. Their main goal is to identify adaptation opportunities and build resilience among the poorest and worst-impacted communities, including those that derive their primary income from artisanal fishing.

At the University of South Florida, Chuanmin Hu heads an optical oceanography lab that tracks the GASB and publishes a monthly outlook bulletin for the Caribbean Sea. He says he thinks the complexity and connectivity of unbounded ocean systems pose a major challenge to understanding what drives Sargassum.

“We are not looking at a local problem like your backyard pond,” he said. “The vast ocean connects the western and eastern planet, the North and the South Atlantic, the surface and the deep Atlantic, the air and the water. So it’s a connected problem and there are several variables that can drive Sargassum transport and growth.”

Such variables might include sea temperatures, upwellings, fertiliser runoff, untreated effluence, nutrient discharges from the Congo and Amazon rivers, deposits of iron-rich Saharan dust, and wind and current anomalies associated with negative phases of the North Atlantic Oscillation. Understanding how these variables interact will require a huge, coordinated, international effort.

“We have some hypotheses,” Hu said. “My take is perhaps we have just touched the sides of a giant elephant — but not all sides.”

This article was originally published on Mongabay, written by Richard Arghiris, and is republished here as part of an editorial partnership with Earth.Org.